A Los Angeles Times story by Liam Dillon and Patrick McGreevy hailed the "historic" increase in the state-mandated minimum wage to $15 an hour.

Apparently giddy with excitement, the pair also unwisely told readers that many public-sector employees who earn far more will be receiving big raises as a result of the legislation with having to bother negotiating with the government entities involved to get them.

Predictably, the Times story failed to quantify any potentially negative effects on employment, including only the following vague sentence:

During debate, GOP lawmakers repeatedly raised the specter of job losses and increased automation by forcing businesses large and small to increase the wage to levels not seen in any other state.

In its coverage of the legislation's passage, the Associated Press at least had the integrity to report that "The right-leaning American Action Forum countered with its own projection that the increases could cost nearly 700,000 jobs." For those keeping score at home, that would appear to imply that a national $15-an-hour minimum wage, projected over the remaining 88 percent of the U.S. population, could cost in excess of 5.5 million jobs — and that's before considering the lower (as of now) cost of living in most other U.S. states.

But Dillon and McGreevy screamed loudly and specifically about how many workers will supposedly benefit (bolds are mine): 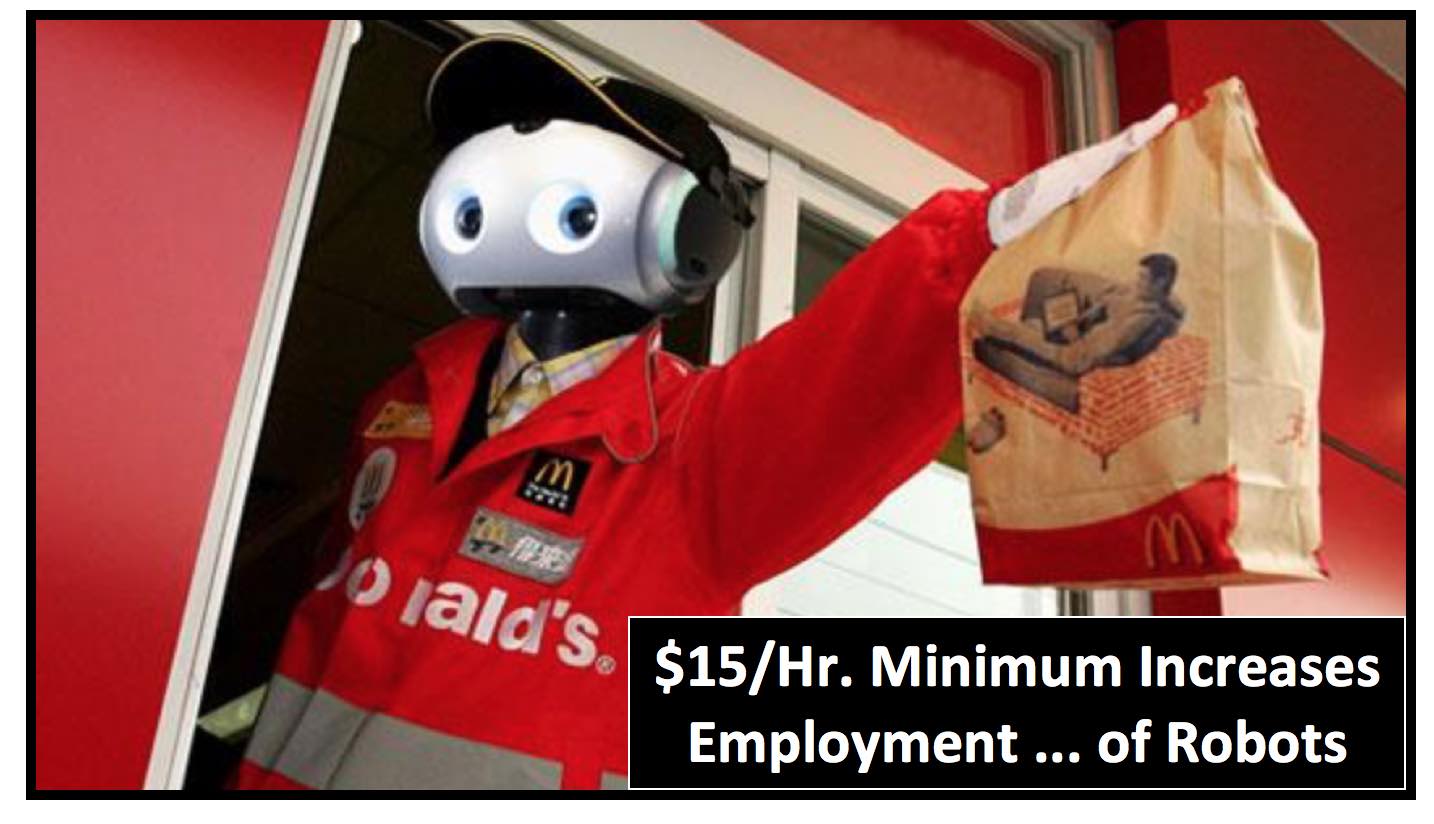 In a move that puts California at the forefront of efforts to raise wages for low-income workers across the country, the Legislature approved a sweeping plan Thursday to raise the minimum wage to $15 an hour over the next six years, boosting the future paychecks of millions of state workers.

The Senate voted 26-12 — with loud cheers of "Si se puede" from the gallery above — to give final approval and send the measure to Gov. Jerry Brown’s desk less than one week after the legislative compromise was reached on the matter. Brown will sign the wage hike into law in Los Angeles on Monday.

... The swift approval from the Legislature puts California at the forefront of efforts from liberals and labor groups nationwide to increase the minimum wage to $15 an hour. The action caps a whirlwind week in the Capitol. Brown formally unveiled the plan Monday, and it is now ready for his signature just three days later.

"This is an argument about economic justice," Assemblyman Sebastian Ridley-Thomas (D-Los Angeles) said during floor debate. "Justice is not something that can be negotiated or compromised."

Under the plan, the state’s hourly minimum wage would increase from the current $10 to $10.50 on Jan. 1, 2017, then to $11 the following year, and increase by $1 annually until 2022. Businesses with fewer than 26 employees would get an additional year to comply(What was that Mr. Ridley-Thomas said about no negotiation or compromise? — Ed.), and Brown and his successors could delay the increases by one year in the case of an economic downturn. Assuming no pauses, the minimum wage would increase each year based on inflation starting in 2024.

Economists have estimated the measure would increase the pay of 5.6 million workers across the state — nearly 1 in 3.

... Aside from affecting low-wage workers, the deal will have broad consequences on all sectors of the economy and the state budget. The state Department of Finance has estimated that the wage increase would cost the state $3.6 billion annually by 2023, primarily from a pay boost for in-home healthcare workers in the public sector.

That $3.6 billion per year is about 2 percent of California's $170 billion-plus state budget — "primarily" to benefit just one group of workers, or what's left of them.

Here's the punch line. A clearly significant cadre of workers who make far more than the minimum wage will automatically get huge pay increases:

Beyond that, the wage hike also will increase the pay of workers whose salaries are tied to the minimum wage. For instance, teachers and other workers who are exempt from state overtime rules must be paid at least double the minimum wage or receive overtime.

School districts, instead of having to pay teachers at least $20 an hour, will have to pay them at least $30 in 2022, and will have to grant even higher inflation-based minimums each year thereafter — all without any kind of negotiations with the districts ever having to take place. This massive increase will filter its all the way up the school-pay food chain, where unconsciounable numbers of teachers and administrators already receive six-figures in annual pay, costing state taxpayers untold billions of dollars.

Readers are advised to commit what they've just read to their memory banks, as it's highly doubtful that they'll ever see anyone in the establishment press expose organized public-sector labor's intensely greedy motive behind minimum-wage legislation again.