A truly annoying trend among leftist writers whose work appears exclusively online is their tendency to write a clickbait headline which either has nothing or almost nothing to do with the related post's content, or directly contradicts it.

It takes a special degree of feigned ignorance to try to pretend that the two women's statements and the Times bestowing a common meme upon them didn't hurt Mrs. Clinton. The damage is obvious — so obvious that the Times posted a Tuesday afternoon item informing readers that a "Hillary Clinton Backer" had "suggested that Ms. Albright and Ms. Steinem be 'kept away' from Mrs. Clinton’s campaign."

While Ross's headline played "Let's pretend," she utterly failed to back it up (bolds are mine): 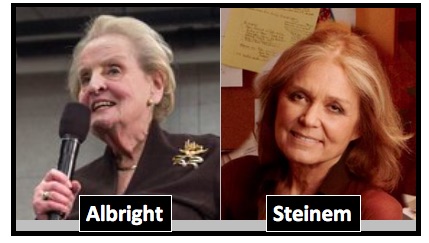 Perhaps the Clinton campaign's internal polling had, by this weekend, made it clear just how poorly Hillary Clinton was doing among New Hampshire women. Maybe that triggered some kind of distress signal broadcast to Clinton's high-profile female supporters and surrogates. Maybe that helped set in motion the entire Madeleine Albright-Gloria Steinem-Hillary Clinton fiasco this week.

But now, with the New Hampshire primary done, Clinton's rather dire situation with women — particularly young white women in that state — is pretty clear for all to see.

Clinton did not simply lose New Hampshire on Tuesday night to Sen. Bernie Sanders (Vt.) by around 20 points; she also narrowly lost New Hampshire women to Sanders, too. In fact, early exit polling indicated that Clinton lost the quest for female voters to Sanders. Late Tuesday night, Sanders led her among women by around 10 points, according to exit polls reported by CNN.

That's right. The group that the Clinton campaign and — if we are honest — many a political prognosticator long assumed would form a strong contingent of Clinton's voters due, at least in some part, to the thrilling prospect of casting votes that might help to put the first woman in the White House, appears to have opted for Sanders instead.

In Iowa on Feb. 1, Clinton did manage to pull off a narrow, if contested, overall victory and won Iowa women by a more comfortable 11-point margin. Clinton earned 53 percent of Iowa women's votes, compared to the 42 percent of women who voted for Sanders in that state. But in New Hampshire, that did not hold up, at all.

Gosh, Janell, what could possibly have caused Mrs. Clinton's advantage with women in Iowa to not "hold up, at all" in New Hampshire — and by such a wide margin, moving from +11 to -10 (which Ross, as seen above, described as "narrow," even as she characterized Mrs. Clinton's 11-point Iowa advantage as a "comfortable margin")?

Ross could have tried to argue that the 21-point move is about the same as the change between the two states' overall results, which went from a dead heat in Iowa to Sanders winning by 22 in New Hampshire. But she didn't, which was wise. That 22-point move should also have caused her and the Post to ditch the deceptive headline.

The consensus polling at Real Clear Politics just before voting began had Sanders up by 13 points. The default interpretation has to be that the far worse final result was largely due to outrage at Steinem's and Albright's remarks — which, to make matters even worse, the Clinton campaign and Mrs. Clinton, respectively, refused to repudiate — on the part of women and men. That's especially likely because the final couple of polls, taken after many voters had become aware of Steinem's and Albright's outrageous statements, showed her falling even further behind.

The real question Mrs. Clinton now faces is whether what Steinem and Albright said — again, unrepudiated, and therefore now presumptively adopted — has permanently damaged her quest for the Democratic nomination, a general election victory, or both, beyond repair.

Memo to Janell Ross: All of this hasn't happened because the elderly pair were helping matters. But I guess getting clickthroughs from clickbait headlines is more important than communicating the truth — and deceiving people who only see the headline and don't click through is further icing on the cake.