The journalists at CBS This Morning have a history of featuring the President of Planned Parenthood on their show. They also have a history of tossing softballs to the head of the abortion provider. So it was shocking on Thursday to see Gayle King tell Alexis McGill Johnson that “some would call” the procedure “murder.”

To be sure, there were some easy questions about the current case before the Supreme Court, but King caused Johnson to stumble after the Planned Parenthood exec called abortion “one of the safest medical procedures there is.” King shot back: “You would call it safe. Some people would call it murder.”

Johnson didn’t seem ready for that one. She sputtered, “That's what we're talking about. There are —  and this was brought up yesterday. There are moral arguments with respect to accessing abortion. But it is the law of the land.” 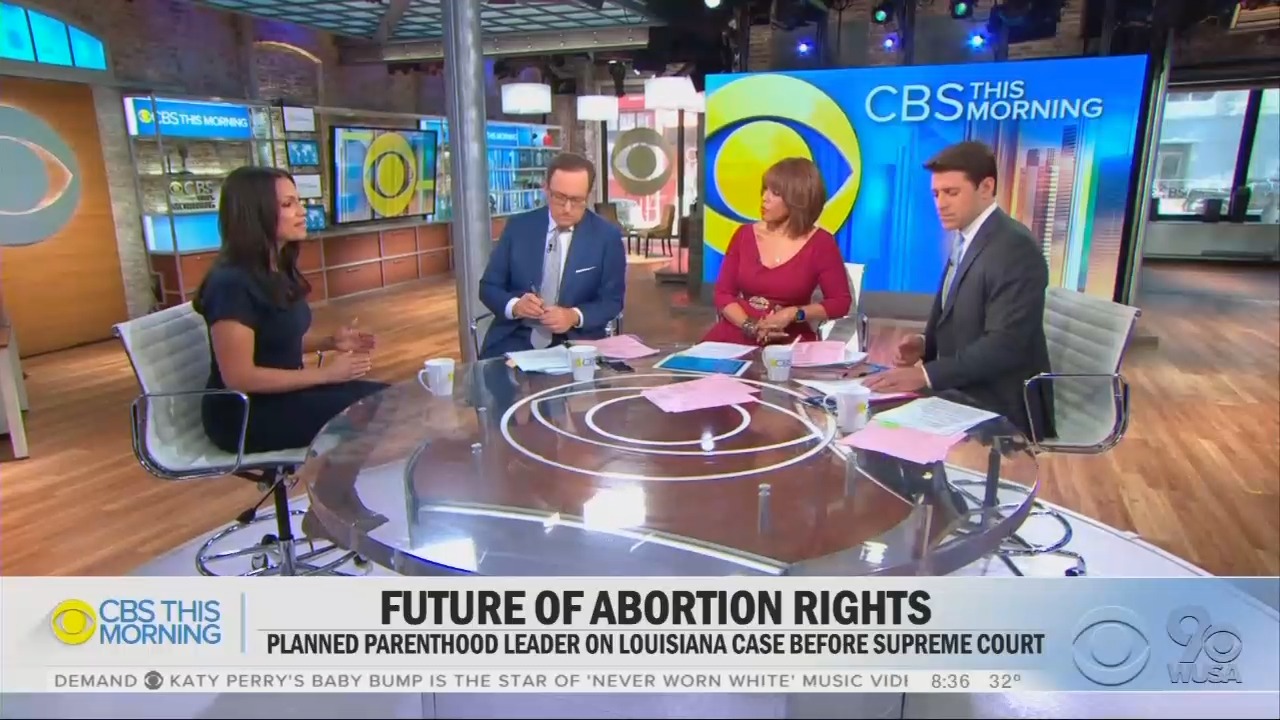 King then shifted to easier territory, offering this softball: “Can you connect the dots to the bigger picture of what's at stake here when you look at this law and when you look at Roe V. Wade?” Co-host Anthony Mason allowed her to scare monger with this question: “What actually happens in Louisiana if the court upholds this law?”

On May 29, 2019, co-host Tony Dokoupil acted as a press release to then-Planned Parenthood President Leana Wen: “I do want to point out, donations are going up. True?” She was eventually fired for being insufficiently pro-abortion. On July 17, 2019, King fretted over the departure: “I was certainly sorry to hear that....I know she was so committed and so passionate about this job. I was very disappointed to hear this.”

On October 2, 2019, King celebrated the opening of a “ginormous” Planned Parenthood, wondering, “Are they getting a lot of business..”

A transcript of the questions is below. Click “expand” to read more.

TONY DOKOUPIL: The supreme court is weighing the first major abortion case since president trump appointed two justices. It challenges a Louisiana law that requires doctors performing abortions to have admitting privileges at nearby hospitals. Supporters say it protects patient safety. Only one doctor meets that requirement in Louisiana. Critics believe that that makes it more difficult for women to obtain abortions.

GAYLE KING: So the Louisiana attorney general said they will quote not waver in defense of, quote, “our state's pro-woman and pro-life laws.” The governor's office did not return a request for comment. Planned Parenthood filed a court brief calling the law unconstitutional “for imposing significant burdens on patients seeking abortion care.” Only on CBS This Morning, we  are joined by Alexis McGill Johnson, she is the acting president and CEO of Planned Parenthood Action Fund. She was in court yesterday for the arguments and joins us at the table. Good morning to you, Alexis.

ALEXIS MCGILL JOHNSON: Good morning. Thanks for having me.

KING: I want you to set the scene what it was like to be in court yesterday and based on what you heard, did you get any sense of how things are leaning or how it's going to shake out?

ANTHONY MASON: What actually happens in Louisiana if the court upholds this law?

JOHNSON: So if they uphold the law Louisiana will be left with one doctor, one clinic.

KING: One doctor in the whole state.

JOHNSON: One doctor, one clinic.

DOKOUPIL: With those privileges.

JOHNSON: Exactly. And over 1 million women to serve.

JOHNSON: [Abortion] is one of the safest medical procedures there is.

JOHNSON: Well, for the patient.

JOHNSON: That's what we're talking about. There are -- and this was brought up yesterday. There are moral arguments with respect to accessing abortion. But it is the law of the land that a woman seeking an abortion has the right to have access to one.

MASON: What's your next move if the court upholds this law?