CBS Cheerleads for Planned Parenthood: ‘Donations Are Going Up’

The hosts at CBS This Morning on Wednesday cheerleaded for Planned Parenthood, hyping that “donations are going up” and offering softballs to the abortion provider’s president. The journalists offered no push back when Leana Wen repeated the organization’s misleading claim about cancer screenings.

Regarding a new law restricting abortion in Missouri, co-host and Democratic donor Gayle King warned, “What do you think, Dr. Wen, that people who don't understand how serious this is?” She then repeated this talking point: “Planned Parenthood is more than just abortions. I think people need to understand that too.” 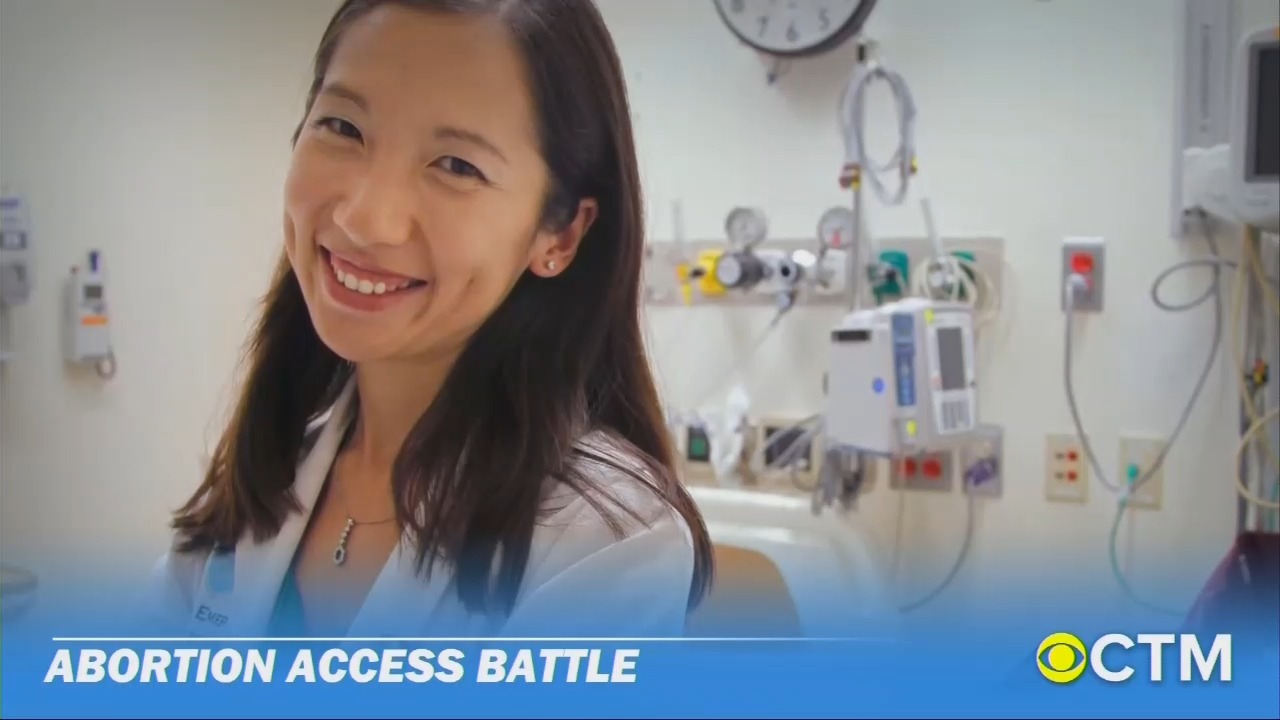 For years, Planned Parenthood backers have pushed the debunked notion that the organization provides services such as mammograms. The Washington Post fact checked this and called it false:

The myth that Planned Parenthood actually offers mammogram X-rays to patients has been long debunked, and needs to stop being repeated. Planned Parenthood does not administer mammograms, but it keeps being perpetuated by the group’s supporters, including celebrities whose claims have a wide reach.

Of course, no one on CBS pushed back against’s Wen’s claims. Instead, co-host Tony Dokoupil gushed over the importance of the abortion group:

TONY DOKOUPIL: I do want to point out, donations are going up. True?

LEANA WEN: They are and I hope that people will keep supporting Planned Parenthood and other organizations that provide essential health care.

DOKOUPIL: As you say, it’s not a drill.

GAYLE KING:  Ahead, Planned Parenthood's president and CEO is here in Studio 57 with her response to a move that would make Missouri the first state in 46 years without access to legal abortion. She has a lot to say about that. 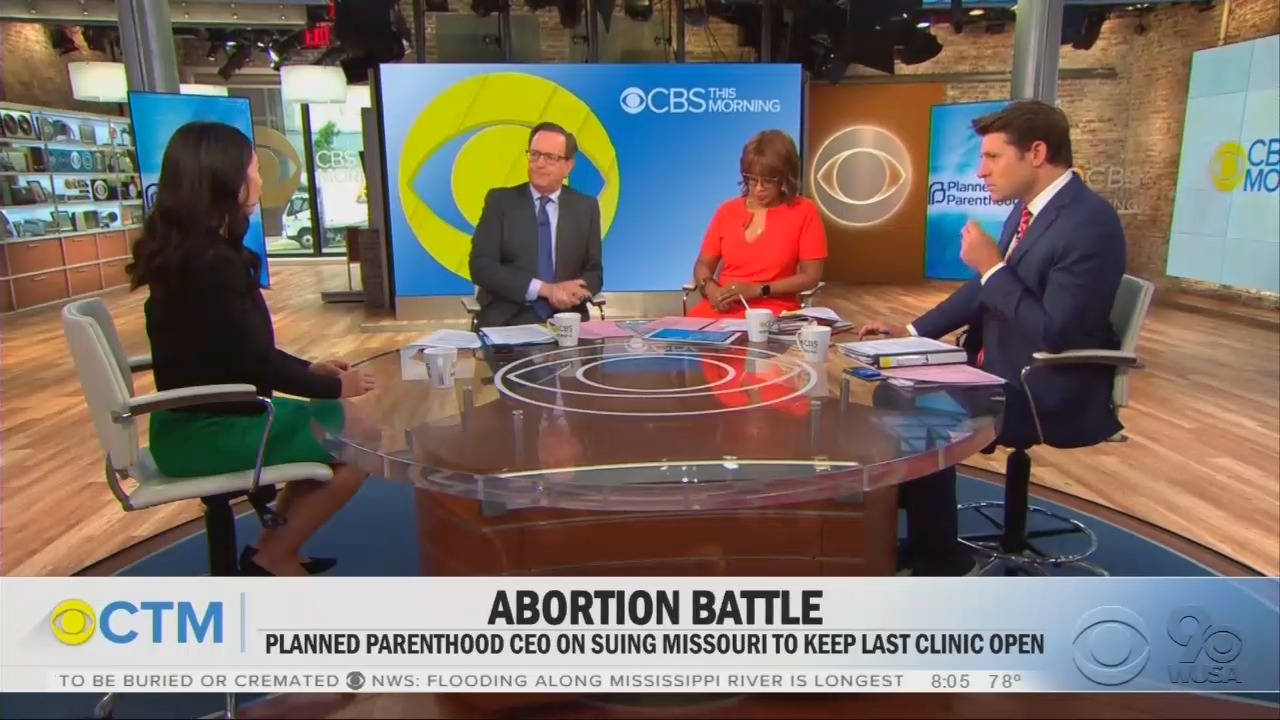 KING: Missouri’s last abortion clinic could be shut down this Friday because the state is refusing to renew Planned Parenthood’s license. Now this story was first reported by CBSNews.com and comes days after the governor there, Mike Parson is his name, signed a bill into law banning abortion after eight weeks of pregnancy with no exceptions for rape or incest. Missouri is one of six states to pass similar laws this year. None of those laws have taken effect yet.

ANTHONY MASON: If the St. Louis clinic closes, Missouri will become the first state effectively to end all legal abortion service since Roe vs Wade established that right back in 1973. We reached out to Governor Parson and the Missouri Department of Health and Senior Services, but they did not provide a comment. Planned Parenthood is suing to keep providing abortions at the clinic with emergency court hearings today. The organization's president and CEO Dr. Leana Wen is with us. Good morning, Dr. Wen. Thanks for being here.

MASON: The new law in Missouri not going into effect until the end of August. What is the state telling you about why it is not renewing the clinic’s license?

WEN (Planned Parenthood president): This is a real public crisis happening right now. Because we could face a situation by the end of the week more than 1.1 million women in Missouri will have abortion accessible in their own state. So abortion remains legal but if it's inaccessible then for all intents and purposes women are not able to access essential health care.

MASON: What are you expecting at the hearing today?

WEN: Well, we hope the court will see exactly what his happening, which is over the last ten years the state of Missouri has imposed regulation upon regulation that has no basis in medicine. We've complied with all of them because we want to keep our health center open. These are things like making our hallways extra wide, forcing women to wait 72 hours, even having unnecessary, invasive pelvic exams.

WEN: It's bad for health care and traumatizing for women, especially women who have suffered sexual assault and rape. We've done this because we wham to keep on providing health care, but now the state is threatening to prosecute our doctors. The bill that the governor just signed would put doctors up to 15 years in prison for providing medical care and that's a terrifying reality for women and doctors.

KING: What do you think, Dr. Wen, that people who don't understand how serious this is?

WEN: People need to understand this is not a drill. It's not hypothetical. Missouri could become the first state in nearly 50 years to have no abortion care in the entire state. And I want people to know that Planned Parenthood will always fight for women. We will always be here. We'll fight in the courts. We'll fight in the legislatures, and we need everyone's support to fight these extreme bans happening around the country.

KING: Planned Parenthood is more than just abortions. I think people need to understand that too.

DOKOUPIL: We’ve tried to reach out to the State of Missouri and the Department of Health. We haven't heard back. Don't they have a right under the law to impose these restrictions?

WEN: What they're doing is weaponize the inspection process and politicize it. I’m a former health —

DOKOUPIL: You think it's not in good faith?

MASON: You were at the clinic in Missouri yesterday.

MASON: What were the doctors there telling you?

WEN: I met with the staff, the doctors, nurses, and other clinicians there, and our staff are saying that they've seen this coming for years because they've been on the front lines having all these requirements imposed upon them that they have had to meet. Now this is coming. This is a warning to everyone in the country that this is not a drill.

KING: I've heard you say this is personal for you, this particular case. How so?

WEN: I was a medical student at Washington University in St. Louis. I volunteered at that health center and I've seen for myself the women who already travel hundreds of miles to access essential health care and now to see that health care literally being taken away that will endanger women's lives, in particular women with low income, women who have to travel from rural areas. This is what's happening around the country. This is the real impact of these terrible laws that are being passed.

DOKOUPIL: Doctor Leana Wen, thank you for joining us. We have to go. But I do want to point out, donations are going up. True?

WEN: They are and I hope that people will keep supporting Planned Parenthood and other organizations that provide essential health care.

DOKOUPIL: As you say, it’s not a drill.