CBS Warns of GOP Being ‘Clueless and Insensitive Men’ in Hearing

CBS This Morning journalists on Friday lectured that Republicans during the Brett Kavanaugh sexual assault hearings are at risk of, once again, of being portrayed as “clueless and insensitive men.” Just like in the Anita Hill/Clarence Thomas hearings from 1991. To bolster this, CBS played clips of Senators questioning Hill, except the examples included mostly weren’t of Republicans, but instead Democratic Senators Joe Biden and Howell Heflin as well as Alan Simpson and then-Republican Arlen Specter (who would later switch parties to become a Democrat).

After playing the clips, co-host Gayle King lamented, “...You look at that video and it makes you wince. You look at Anita Hill's face and the questions she had to take and had to answer, is this a case of deja-vu all over again?” New York Times writer Jodi Kantor chided, “The Republican senators don't want to look like clueless and insensitive men, grilling a woman. They may end up that way anyway.”

“They may end up that way anyway.” Certainly if liberal journalists have anything to say about it. Kantor did the typical journalist move where she equated the Hill hearings and the Kavanaugh situation, as if we know that the two situations are comparable when it comes to facts: “Well, here we are almost a year after the Me Too movement caught fire in the world and it feels like we're returning to the original ground zero of these Supreme Court hearings.” 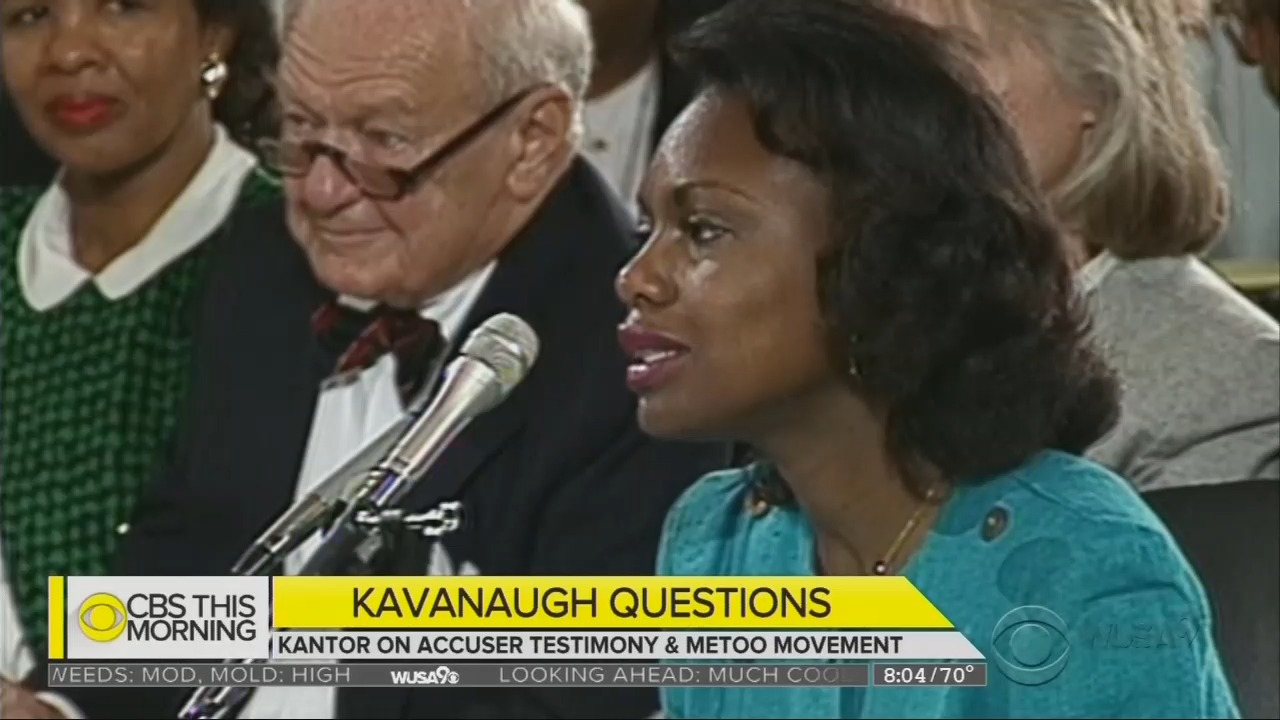 The Times journalist then talked about accuser Christine Blasey Ford as a “hero”: “She has been attacked. She has been threatened, but there's also been a lot of sensitivity and sympathy and she's being hailed by some people as a hero for coming forward.”

It was left to co-host Gayle King — no conservative — to make the point that Judge Kavanaugh has been on the receiving end of death threats as well.

With all the vague details of the accusations against Kavanaugh, it’s sloppy to link them to the Anita Hill case. Yet, King and others couldn’t resist. Journalists will definitely try and make it that next week.

ANTHONY MASON: The potential hearing comes 27 years after Anita Hill testified during the Clarence Thomas confirmation. Here are some of the questions she answered about her claim that Thomas sexually harassed her.

SENATOR JOE BIDEN (D-Delaware): Can you tell the committee what was the most embarrassing of all the incidents that you have alleged?

SENATOR ARLEN SPECTER (R-PA): How reliable is your testimony in October of 1991 on events that occurred eight, ten years ago?

SENATOR HOWELL HEFLIN (D-Alabama): I've got determine what your motivation might be. Are you a scorned woman?

SENATOR ALAN SIMPSON (R-Wyoming): I would think that these things that you describe are so repugnant, so ugly, so obscene, that you would never have talked to him again, and that will —  that is the most contradictory and puzzling thing for me. 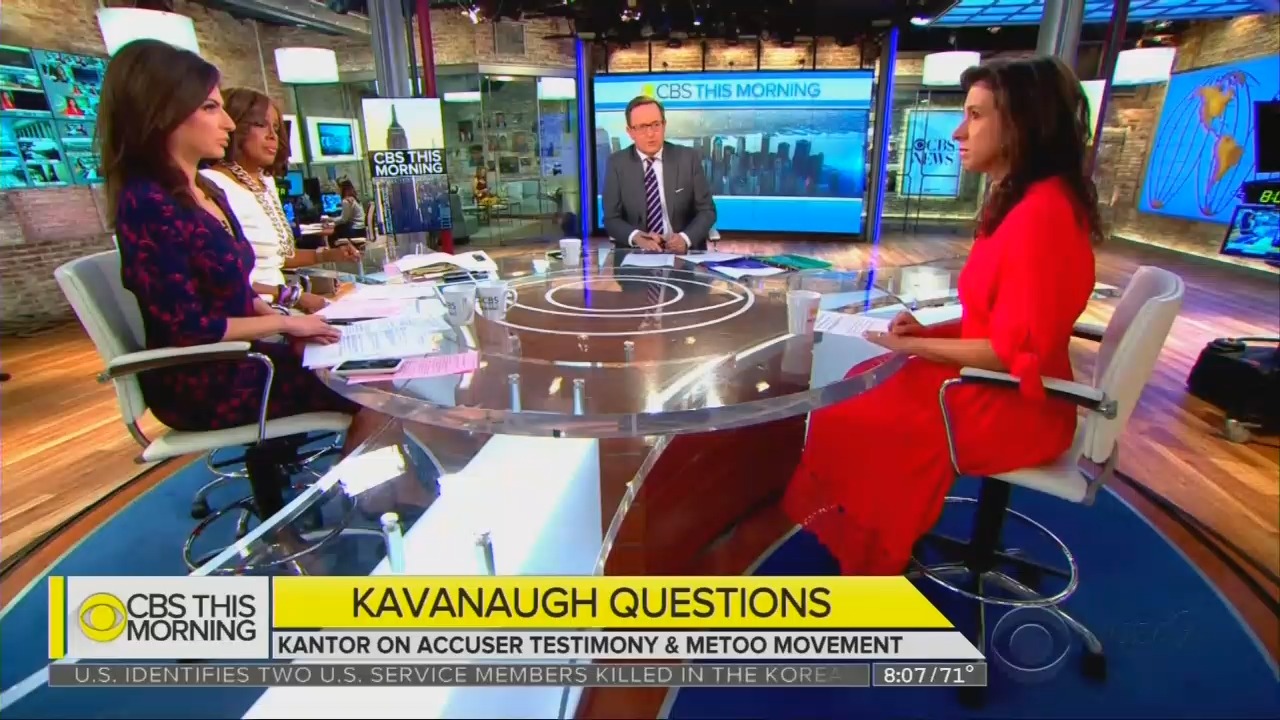 GAYLE KING: New York Times investigative reporter Jodi Kantor joins to us discuss the lessons learned from the hearing. She co-wrote the first story about sexual allegations against Harvey Weinstein, which fueled the Me Too movement. The Times won a Pulitzer Prize for that reporting. She is also the CBS News contributor and joins us at the table. Boy, Jodi, you look at that video and it makes you wince. You look at Anita Hill’s face and the questions she had to take and had to answer, is this a case of deja-vu all over again?

JODI KANTOR: Well, here we are almost a year after the Me Too movement caught fire in the world and it feels like we're returning to the original ground zero of these Supreme Court hearings. And the question to watch for in the next week is this a repeat of the Anita Hill dynamic? Which, by the way neither side wants. The Republican senators don't want to look like clueless and insensitive men, grilling a woman. They may end up that way anyway. And certainly what Dr. Ford's lawyers have suggested is that she doesn't want to be subjected to that kind of treatment either.

BIANNA GOLODRYGA: And of course we all remember the Anita Hill hearings and we were talking about them. That's all the nation could talk about for weeks on end. We seem to be in such a fast-paced news cycle, though. Remember the anonymous op-ed just a few weeks ago? No one's talking about that now. Could that be one of the reasons Republicans want to get this vote through quickly, hoping that the storyline does change a week or two from now? Or do you think this one sticks?

KANTOR: Well, I think they have a lot of reasons for want doing this very quickly. But on the other side, Dr. Ford's lawyers are essentially arguing this needs to be done in some sort of fair and sensitive way. Now, the question is, what that really looks like, right?

KANTOR: It's like both sides are kind of trying to make it up as they go along.

MASON: Anita Hill wrote in an op-ed piece that the committee has, quote, “learned little from the Thomas hearing much less the more recent Me Too movement.” How much do you think things have shifted?

KANTOR: I think things have shifted considerably in the last year. And also in the years since the Clarence Thomas confirmation hearings. For one thing, this —  this is entire discussion is about an alleged incident that took place in high school, an alleged violation that took place in high school. So it's really interesting that we're now discussing that kind of behavior on the public stage. I also think the response to Dr. Ford is very different than it was to Anita Hill. There is —  she has been attacked. She has been threatened, but there's also been a lot of sensitivity and sympathy and she's being hailed by some people as a hero for coming forward. The thing we see again and again that never seems to change is that it is so hard for women to come forward. And Dr. Ford is -- Dr. Christine Blasey Ford is something who struggles with the decision about whether to go public or not.

KING: She has a lot of support and so does he and they both tell very different stories.

MASON: We should find out that she's also getting death threats.

MASON: And she's also being terrorized.

KING: So is he. It's just a  nasty situation on both sides. What are you going to be looking for, we know he's going to testify and it looks like she is too. What should we be looking for? How do you determine who's telling the truth here?

KANTOR: Well, here's my cautious prediction: I think it's possible that his testimony may be even more dramatic than his [sic] and certainly if there's any cross-examination that may be true. Because what we can basically see is that she will get up and tell the same story that she told to The Washington Post, which is a story that we already know. However, he's issued this kind of sweeping, blanket denial, and there are a lot of questions that are going to be asked about him, you know, how familiar were you in high school.?Really, this party didn't happen at all? The allegation is that you were very drunk. If you were drunk how would you remember anyway?

MASON:  And he has a friend who admits he was a black out drunk.

MASON: Allegedly I should say.

KANTOR: Right. The friend says he doesn't want to speak up. Could he be compelled to in some way? Et cetera, et cetera. So my cautious prediction, because none of us know what will happen in the next week, is that his testimony could be even more riveting than hers.

MASON: All right. Jodi Kantor, thanks so much for being with us.