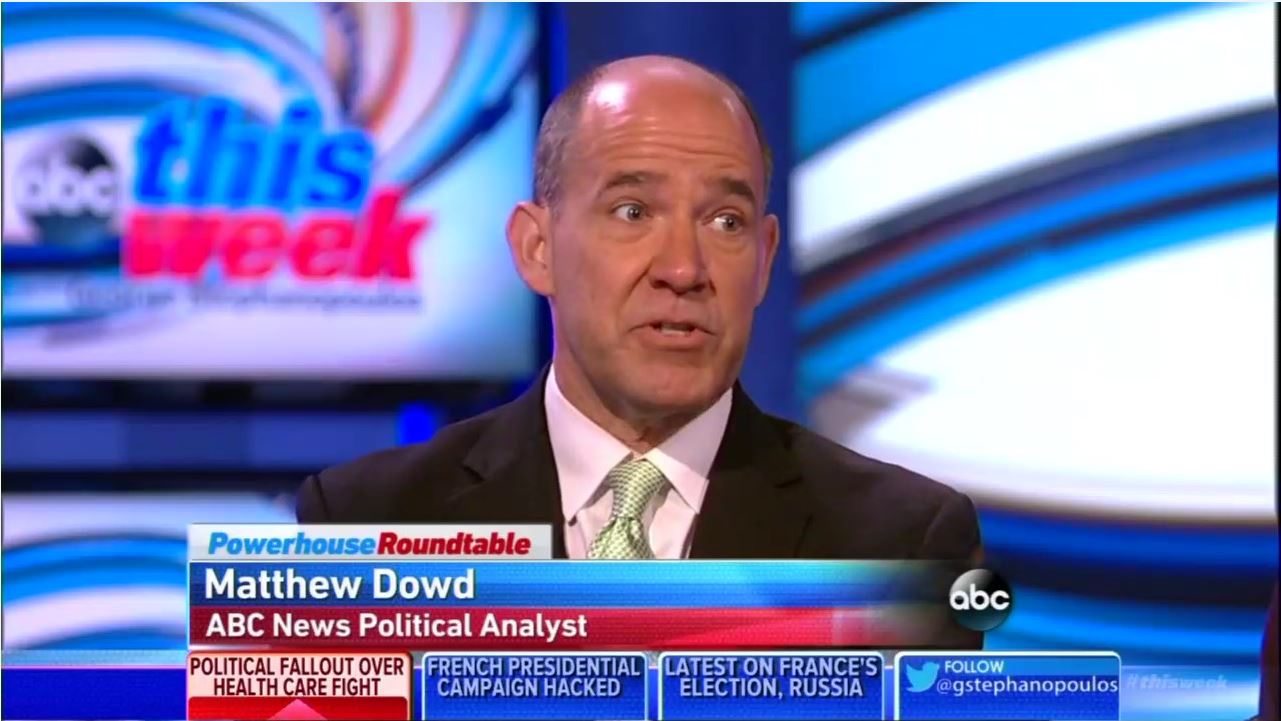 ABC commentator Matthew Dowd is supposed to help the network have a sense of being non-partisan by being their token Republican guest. But during his appearance on Sunday’s This Week, he seemed to show off his true political bent as he pushed for socialized medicine. “We need to ask the question, should we go to a single-payer system? Because affordability hasn't been fixed by this or ACA. And accessibility hasn’t fundamentally been fixed,” he declared to the rest of the panel.

Dowd’s question was more than him asking for an academic discussion. Earlier that morning, Dowd was on Twitter glorifying the dysfunctional Medicaid and VA health care systems as what all Americans should be experiencing. “Again, people in Medicaid and at VA are much happier with their care and cost than people in private health care.  Facts,” one of his tweets read.

As evidence of his claims, he pointed to a Gallup poll that showed that military/veterans and Medicaid recipients are satisfied at a rate of 78 and 75 percent, respectively. That’s not much different from those who get their insurance through an employer. But Gallup explains that this result could merely be due to the fact that they get insurance at little to no cost to them. The poll is also from 2015, that’s before the mass exodus of insurance providers from the health care exchanges and skyrocketing premiums.

Dowd might actually want to watch the news so he can see how government ran health care really works. He seems to have callously forgotten how dozens of veterans died waiting for care at a VA center in Phoenix, Arizona in 2015.

The very network he works for was the only network to report on the “dangerous conditions” at the D.C. VA hospital. “Among the findings, hospital staff ran out of tubes for dialysis, used expired equipment during surgery, and had a device to repair fractures repossessed for non-payment,” reported Anchor David Muir on World News Tonight.

There was also the recent firing of a VA hospital director in Louisiana, which no network reported.  “[Former Director] Toby Mathew was accused of refusing to buy essentials like vital signs machines, linens, and mattresses while spending millions on furniture, TV and solar panels,” reported Fox News’ Bret Baier on Special Report.

ABC’s competitor, CBS has been following the story of Sgt. Maj. Ray Mackey, a retired Marine who was hopelessly mired in the bureaucracy of the VA system. After waiting months to have his prosthetic legs properly fitted and ordered, he finally gave up on the VA center and moved on to Walter Reed Medical Center where he received them in less than a week.

On Twitter, Dowd praised the health care systems of European countries with claims of reduced costs. But he never mentioned how their systems are plagued with long wait times for simple procedures and tests due to limited time and resources. But then again, this is the same guy that lectured the Republican Party to give up on repealing ObamaCare.

In addition to Dowd's ridiculousness, journalist Cokie Roberts falsly asserted that ObamaCare wasn't a horrendously broken system. "Also. They're overstating this business that the health care system is broke. It's not so broke. And the fact is the Medicaid expansion has really helped health care in the country," she claimed. She conveniently omitted how many counties have only one insurance company, while most of Iowa could have none.

COKIE ROBERTS: The question of a victory though. I was struck by Paul Ryan this morning saying “I'm proud of this.” That could be an ad again him. Because the fact is that yes, they feel good that they kept their promise, as he kept saying. And their campaign chairman says, you know, “We need to keep our base excited in an off year election.” Keeping your base excited at the expense of people losing health care I don’t think works well politically.

SARA FAGAN: This fires up both bases. No doubt. One of the things that has not gotten as much coverage in this debate over the last week, is the fact that the Republican base demanded this. And they demanded it for very good reasons. And Paul Ryan pointed them out, which is Obamacare was failing. And so, we can talk all we want about people with pre-existing conditions or access to health care, but if there's no health care system in entire states, essentially, these are all mute arguments because it doesn't exist. And so something has to get done.

ROBERTS: Also. They're overstating this business that the health care system is broke. It's not so broke. And the fact is the Medicaid expansion has really helped health care in the country.

GEORGE STEPHANOPOULOS: In the meantime though, it wasn't broke before. But we do have insurance companies now saying they're seeing increases losses with all the uncertainty.

ROBERTS [Cutting him off]: Some are. Others like Anthem are saying they're doing quite well.

STEPHANOPOULOS: But the more the debate goes on the more uncertainty there is

MATTHEW DOWD: The health care system has been broken for more than 20 years. And it was broke before ACA. It's broken after ACA. And this fix is like going to a sick patient and giving them experimental treatment. And many experimental treatments hurt the patient. AHCA is going to hurt the patient. To me, no side is fundamentally addressing-- and we need to ask the question, should we go to a single payer system? Because affordability hasn't been fixed by this or ACA. And accessibility hasn’t fundamentally been fixed.