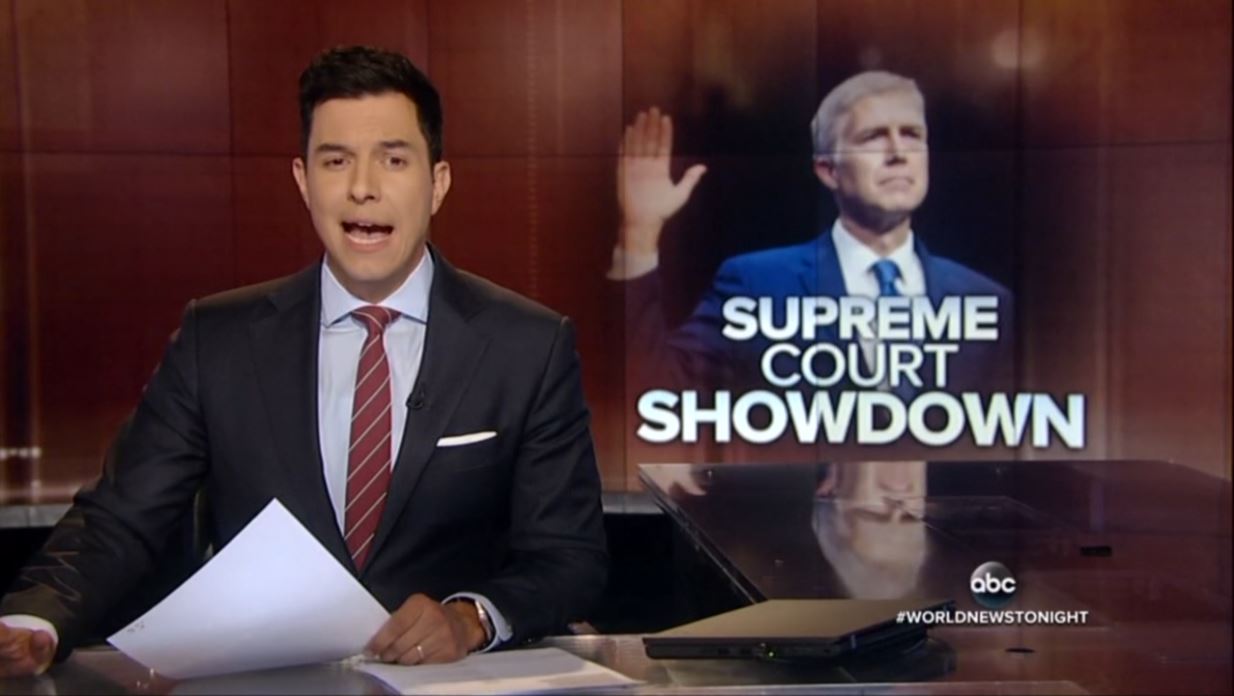 Capitol Hill was a hive of activity on Monday. The House Intelligence Committee conducted a hearing with FBI Director James Comey and NSA Director Mike Rogers about the investigation into Russian meddling in the 2016 election. In the Senate, the Judiciary Committee conducted the first in a series of hearings in the confirmation process of Judge Neil Gorsuch. Both were major events on the hill but the Comey hearing drew the overwhelming majority of the network news attention, leaving one anchor to say it was “overshadowing” Gorsuch.

In all, the Big Three networks’ (ABC, CBS, and NBC) evening news programs were hyper-focused on the Comey hearing. That hearing garnered a whopping 26 minutes 30 seconds of coverage across all three networks. In stark contrast, the confirmation hearing of judge Gorsuch received a mere five minutes 58 seconds.

NBC Nightly News had the largest disparity between Comey and Gorsuch, with nine minutes 48 seconds and one minute 36 seconds respectively. The network actually ran four separate stories on the Comey hearing. They reporting on the hearing itself, how the White House was distancing itself from advisers with apparent ties to Russia, Trump’s purported crumbling credibility, and anchor Lester Holt sat down with Tom Brokaw for his perspective. All of that before simply touching on Gorsuch.

Reporter Andrea Mitchell had the first Comey report on the hearing. “And tonight, the FBI revealing they're investigating possible coordination between the President's campaign and Russia's hacking of Democrats,” she hyped before speculating that, “A lengthy probe that could lead all the way to the White House.” She also whined that it was “a tale of two hearings,” because Democrats focus on Russia while Republicans wanted to know how Mike Flynn’s name was illegally leaked to the press.

During the Brokaw segment, the former NBC anchor seemed to try to temper the left’s excitement for an impending indictment of Trump. “Now, people are beginning to murmur Watergate. It's a little too early to do that. That took two years, it was built brick by brick,” he noted, seemingly saying it might be a while.

The network didn’t have much to say about Gorsuch. Correspondent Pete Williams reported that “the hearing for Neil Gorsuch comes just over a year since President Obama nominated federal judge Merrick Garland to fill the vacancy left by the death of Antonin Scalia.” It was a complaint that most of the networks shared. Williams also speculated that “Some scholars say Gorsuch could turn out to be further to the right than Justice Scalia was on issues like the rights of criminal defendants.”

On ABC’s World News Tonight (Comey: seven minutes 54 seconds / Gorsuch: two minutes 17 Seconds), fill-in anchor Tom Llamas feigned shock the FBI was investigating the allegations. “FBI Director James Comey in an extraordinary move, confirming publicly for the first time that the agency is investigating Russia's attempt to influence the election and possible links to members of President Trump's campaign team,” he announced at the top of the show. 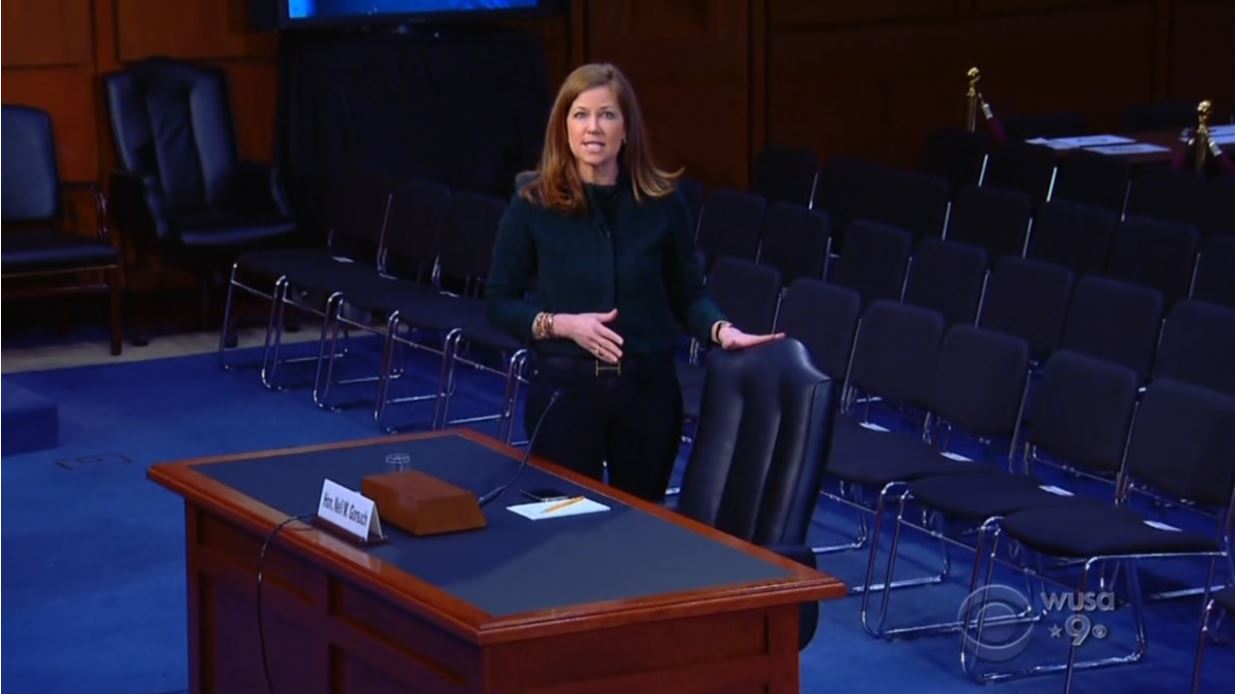 When it came to Gorsuch, reporter Terry Moran seemed to back up the Democratic opposition by hitting on their talking points. “And Democrats challenging him, demanding to know if he could rule against President Trump, if the FBI probe into links between Russia and the Trump campaign comes before the court,” he stated. He went on to say that “The Democratic base is spoiling for a fight, furious over what happened to President Obama’s nomination for this seat, Merrick Garland who never even got a hearing.” “Gorsuch has a genial and disarming personality. Hard to portray him as a judicial villain,” Moran eventually warned

CBS Evening News dedicated eight minutes 48 seconds to Comey while allocating two minutes five seconds to Gorsuch. Anchor Scott Pelley seemed to mock the fact that Gorsuch’s hearing was being drowned out, noting that it was being “overshadowed” by the other one. Pelley also complained that “Today 13 months and one presidential election after the death of Supreme Court Justice Antonin Scalia, the Senate opened confirmation hearings for his successor.”

But in comparison, Jan Crawford’s report on the Gorsuch hearing seemed more balanced that the other networks by taking on a lighter tone. “In a deeply personal 16-minute statement, the Colorado native talked about his western roots and family and thanked his wife Louise.” she reported, “… Democratic senators like Patrick Leahy are still seething that Republicans blocked President Obama's nomination a year ago this week of Judge Merrick Garland.”

There are another two days left in Judge Gorsuch’s confirmation process with 10-hour sessions waiting for him, according to Crawford. It would be interesting to see if the Big Three still continue to drag out the coverage of Comey’s hearing effectively overshadowing the Gorsuch hearing.

ANDREA MITCHELL: And tonight, the FBI revealing they're investigating possible coordination between the President's campaign and Russia's hacking of Democrats. A lengthy probe that could lead all the way to the White House. Russia's motive?

JAMES COMEY: Putin hated Secretary Clinton so much that the flip side of that coin was, he had a clear preference for the person running against the person he hated so much.

MITCHELL: Comey's appearance, along with NSA Director Admiral Mike Rogers, a tale of two hearings. For Democrats it was all about Russia and the possible Trump campaign connection.

MITCHELL: While Republicans avoiding the topic of Russia, instead going after the leaks of classified information, allegedly from current and former intelligence officials. Specifically about fired national security adviser Mike Flynn and the Russian ambassador. 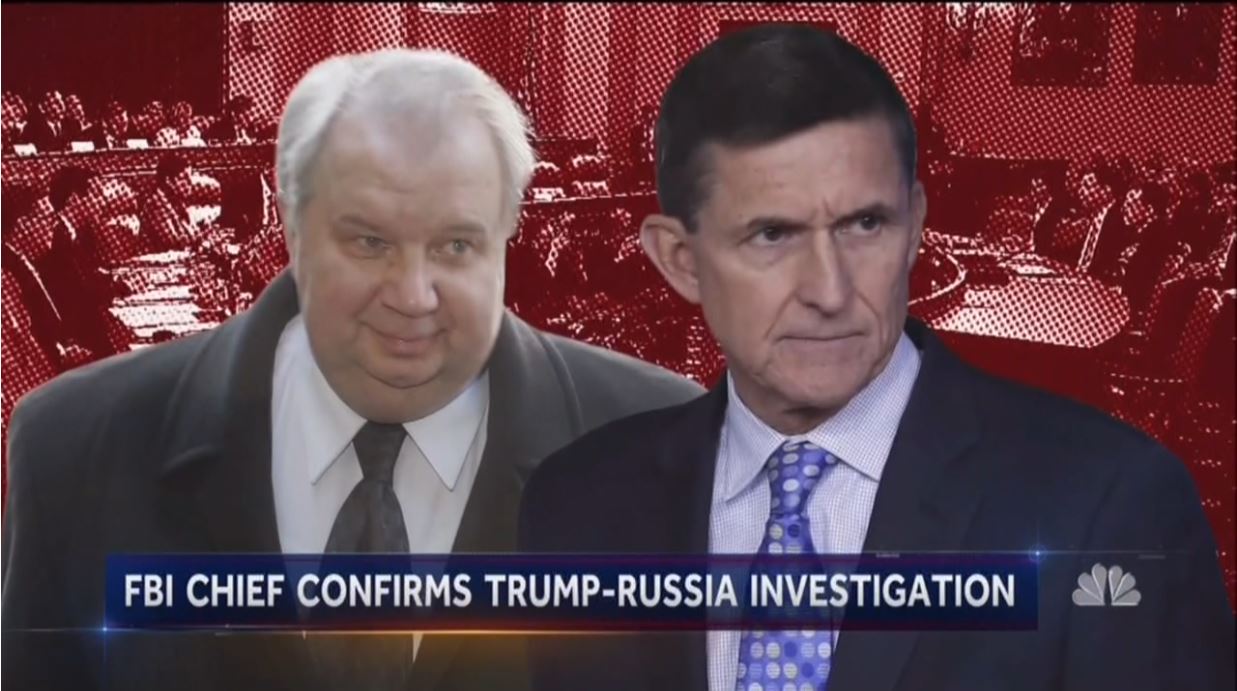 LESTER HOLT: And for perspective on where this leaves us, I'm joined by Tom Brokaw. Tom, you've covered every president since Johnson. Today we got confirm this time from the FBI director, that the president is pushing a false story and that his campaign has been under investigation now since July. These are not policy, red/blue issues, but how do they color everything this administration does and says going forward?

TOM BROKAW: You've got to remember this administration is only two months old, it's got some very important legislation in the works, and yet everyone is focused on whether the president is telling the truth. First of all, about the wiretapping, which everyone says it's not true. And then about any connection he may have with the Russians. We don't know that yet.

Now, people are beginning to murmur Watergate. It's a little too early to do that. That took two years, it was built brick by brick. But in fact, there are a lot of outstanding questions here, Lester. Not just about the integrity of the election but the integrity of the President of the United States, who continues to govern by tweet. Which a lot of people find that very hard to believe. But that's the age in which we now live. And we'll see how this plays out. But it's not going to go away any time soon.

TOM LLAMAS: Good evening on this Monday night. I'm Tom Llamas in for David tonight. And we begin with that high drama on Capitol Hill. Major revelations about the White House, Russian hacking, and those claims about wiretapping. FBI Director James Comey in an extraordinary move, confirming publicly for the first time that the agency is investigating Russia's attempt to influence the election and possible links to members of President Trump's campaign team. Director Comey also breaking his silence 16 days after the President's explosive tweets, confirming there is no proof that president Obama ordered wiretaps at Trump Tower. But despite Comey's statement, the president is still standing by his claim. ABC's senior justice correspondent, Pierre Thomas starting us off from Washington tonight.

JAMES COMEY: I have been authorized by the Department of Justice to confirm that the FBI as part of our counterintelligence mission is investigating the Russian government's efforts to interfere in the 2016 presidential election.

THOMAS: James Comey finally going public and confirming there is an ongoing investigation now in its seventh month into Russia's meddling. Including possible collusion by Trump campaign associates.

THOMAS: It took 30 minutes to get to the other elephant in the room. Comey refuting Trump's accusations in a series of Tweets 16 days ago that, as a candidate, he was wiretapped by President Obama.

THOMAS: But much of the more than five hours of testimony focused on Russian meddling. Comey testifying the Russians were motived in part by animosity toward one candidate.

COMEY: Putin hated Secretary Clinton so much that the flip side of that coin was he had a clear preference to the person running against the person he hated so much.

THOMAS: And according to Comey, they made no attempt to cover their trail.

THOMAS: But he is the same FBI director who vaulted to fame for his public disclosures about Hillary Clinton's e-mail investigation that some Democrats feel derailed her campaign.

TOM LLAMAS: Next, to another high-stakes hearing on Capitol Hill. This one for that Supreme Court spot that has been vacant for more than a year. Nominee Neil Gorsuch getting a cordial welcome. Speaking from the heart in a very emotional introductory remark. But he faces tough questioning ahead. ABC's Terry Moran covers the Supreme Court for us.

TERRY MORAN: Judge Neil Gorsuch in the crosshairs today. But cool under fire, even having some fun. For the most part, though, Judge Gorsuch just had to sit and smile and listen to the Senators' statements, Republicans praising him –

MIKE LEE: I know from my own personal experience that you are one of the best judges in the country.

MORAN: And Democrats challenging him, demanding to know if he could rule against President Trump, if the FBI probe into links between Russia and the Trump campaign comes before the court. 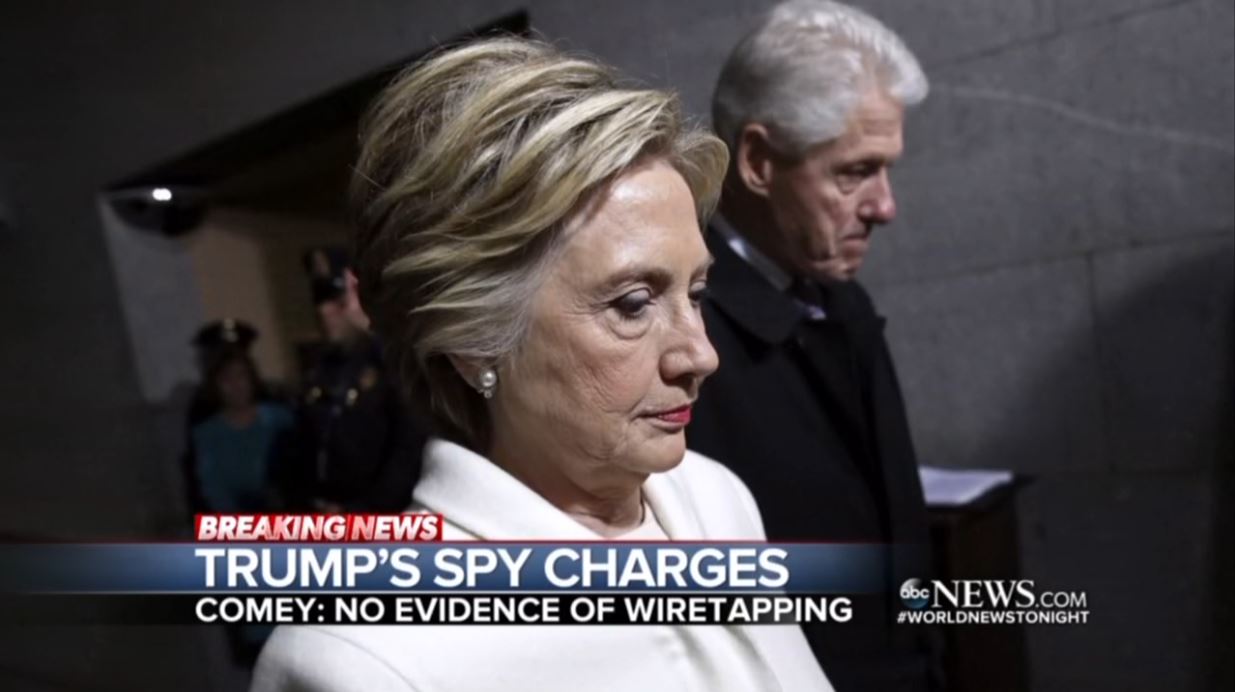 RICHARD BLUMENTHAL: The possibility of the Supreme Court needing to enforce a subpoena against the President is no longer idle speculation.

MORAN: Then it was Gorsuch's turn. And he got personal, thanking his wife.

NEIL GORSUCH: I love you so much.

GORSUCH: A hero of mine and a lifelong episcopal priest.

MORAN: And he praised the judges he called his mentors, including the one he would replace, Justice Scalia.

GORSUCH: Now, we didn't agree about everything. The justice fished with the enthusiasm of a New Yorker. He thought the harder you slapped the line on the water, somehow the more the fish would love it.

LLAMAS: Lots of laughs from that hearing. Terry Moran joins us from the Supreme Court. Terry, it was a day to get to know judge Gorsuch, but what are his chances of confirmation?

MORAN: Well Tom, the Democratic base is spoiling for a fight, furious over what happened to President Obama’s nomination for this seat, Merrick Garland who never even got a hearing. Democrats think they can portray Judge Gorsuch as too friendly to corporate interests, not good for working men and women, but the effort has been kind of scatter-shot, low intensity, and as we saw today, Gorsuch has a genial and disarming personality. Hard to portray him as a judicial villain.