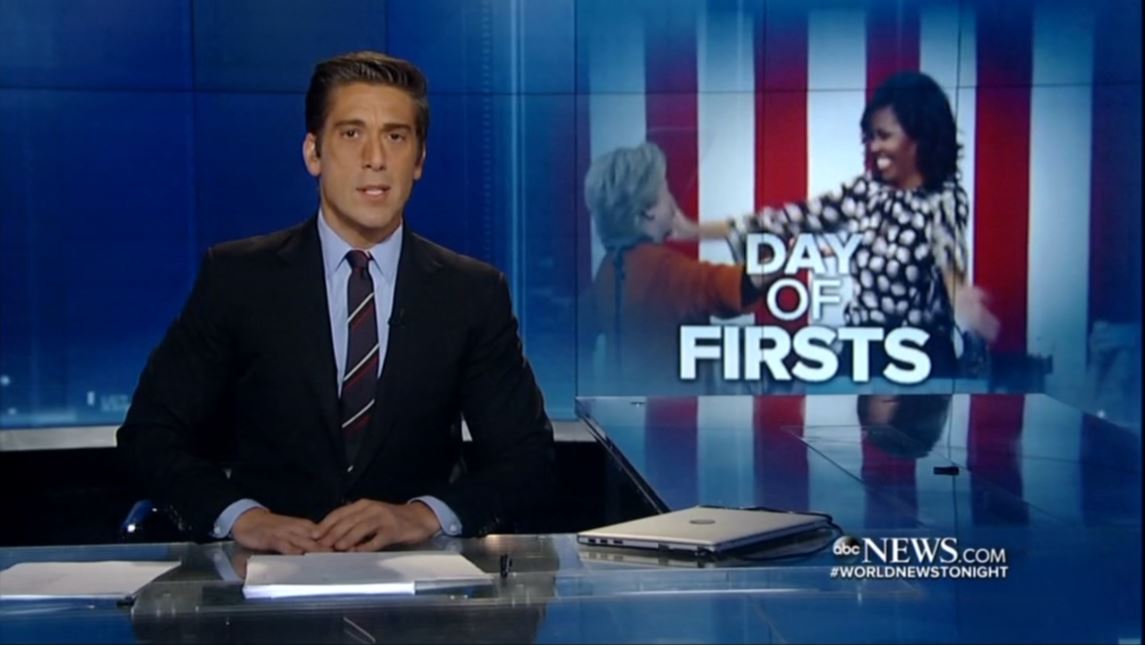 WikiLeaks unveiled yet another highly damaging e-mail for the Clinton campaign Thursday, this one drawing big bold lines between former President Bill Clinton and the companies that helped make him rich. “It reveals a tangled web of charity and personal financial enrichment in what the aide calls ‘Bill Clinton Incorporated,’” announced Anchor Scott Pelley at the top of CBS Evening News. CBS was the only network in the “Big Three” to treat the issue with any form of seriousness, while ABC and NBC chose to glorify First Lady Michelle Obama instead.

The e-mail in question detailed how a longtime aide to Bill Clinton, Doug Band, used his partnership at Teneo Consulting to be the gate keeper to the former president. Teneo represented some of the largest companies in the world, such as Barclays and Dow. And according to CBS’s Nancy Cordes, Band pressured Clinton Foundation donors to shell out huge money for Bill Clinton engagements, “Band argued he was not only the foundation's chief fund-raiser, but had arranged more than $50 million in for-profit activity for President Clinton.”

But viewers of ABC and NBC wouldn’t know the seriousness of the Clinton access scheme because they hid it deep inside puff reports touting Michelle Obama's campaign stop with Hillary Clinton. “And today, for the first time, first lady Michelle Obama walking out onto that campaign stage, right there with Hillary Clinton, with her own message about Clinton, saying this is not over,” hyped ABC Anchor David Muir on World News Tonight.

ABC’s Cecilia Vega seemed to pull out all the stops as she gushed about the two of them on stage together. “They walked out together to cheers and a hug… Former rivals with a shared bond… Their friendship on full display… And of course, that famous line,” the ABC reporter said as she fawned over the event for three minutes, 11 seconds. NBC’s resident Clinton fangirl Andrea Mitchell echoed Vega’s sentiment for the occasion on NBC Nightly News, “An unprecedented moment, two first ladies, current and former campaigning together for the first time.”

Both also did their best to downplay the latest WikiLeaks controversy. “But outside tonight, a shadow over the campaign,” whined Vega to begin her 43 seconds long segment on the e-mail. Vega imparted almost none of the controversial parts of the story. There was no mention at all of Teneo, Band’s role as gate keeper, nor the sheer amount of money passing through him.

Mitchell simply described Band’s e-mail as just a story “competing for headlines” against Michelle and Hillary. And she seemed to try and insulate Hillary from the controversy by noting, “But no indication Hillary Clinton ever did anything for those donors when she was secretary of state.”

DAVID MUIR: And tonight, 12 days to go. New polls just out in the key battlegrounds showing a tightening race between Hillary Clinton and Donald Trump. And today, for the first time, first lady Michelle Obama walking out onto that campaign stage, right there with Hillary Clinton, with her own message about Clinton, saying this is not over. And it comes as the Clinton team faces a new WikiLeaks headline involving money made by Bill Clinton after the White House. What one e-mail refers to as “Bill Clinton Inc.” ABC's Cecilia Vega is in North Carolina.

CECILIA VEGA: They walked out together to cheers and a hug. First lady Michelle Obama and Hillary Clinton.

HILLARY CLINTON: Seriously, is there anyone more inspiring than Michelle Obama? And maybe—maybe  it's especially—especially meaningful to me, because I do know something about being first lady of the United States. 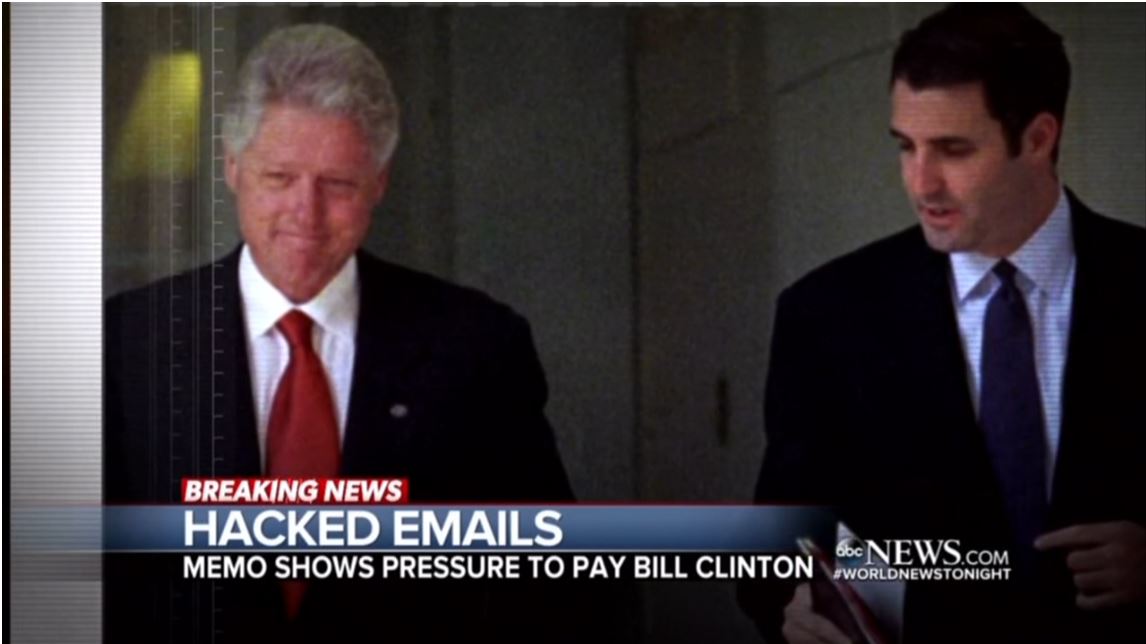 CLINTON: As our first African-American first lady, she's faced pressures I never did. And she's handled them with pure grace.

VEGA: Their friendship on full display.

CLINTON: Among the many real privileges I've had is to see the president and the first lady dance. Wow. One could only hope.

VEGA: In the battleground of North Carolina, one of Clinton's largest crowds so far. Packed with little girls, families.

MICHELLE OBAMA: I say this everywhere I go. I admire and respect Hillary.

OBAMA: Yeah, that's right. Hillary doesn't play. She has more experience and exposure to the presidency than any candidate in our lifetime. And, yes, she happens to be a woman.

VEGA: And of course, that famous line.

OBAMA: Casting our vote is the ultimate way we go high when they go low. Voting is our high. That's how we go high, we vote. How do we go high?

OBAMA: How do we go high?

VEGA: But outside tonight, a shadow over the campaign. Another batch of hacked WikiLeaks emails. ABC has not independently confirmed them, and the campaign won't comment on individual documents. The new revelation about the Clinton Foundation. This 2011 memo from Bill Clinton’s longtime aide, Doug Band, reveals how he pressured companies to donate to the foundation and also to pay the former president millions for things like speeches. In the case of one donor, Band describes, quote, "A foundation relationship that evolved into a personal business relationship for President Clinton." He even had a term for it, "Bill Clinton Inc."

And Cecilia, we've seen the first lady on the trail for Hillary Clinton, but not side-by-side with her.

VEGA: Yeah, this was the first time, David. I got to say, I was in that room near that stage, and they really seemed like friends, but not just Mrs. Obama. The White House saying that President Obama will be out on the campaign trail nearly every day during the final week of this campaign. Never before in recent history, David, has a president campaigned so much for the person hoping to succeed him.

LESTER HOLT: Good evening. 12 days to go until Election Day. And the latest drip, drip of stolen e-mails has produced a fresh stain on the Clinton campaign tonight. This one written by a top aide to Bill Clinton that reveals the former president personally earned millions of dollars from donors and contacts made through the Clinton charitable foundation. While the e-mail doesn't suggest anything illegal or name Hillary Clinton, it’s been quickly seized on by Donald Trump. The Clinton campaign, however, continues to resist engaging on the e-mail hacks instead hoping to make this a day about a joint appearance with her most powerful advocate. We’ve got it all covered with NBC’s Andrea Mitchell. Andrea, good evening.

ANDREA MITCHELL: Good evening, Lester. Hillary Clinton's long-awaited appearance with Michelle Obama in all important North Carolina, even as the campaign is trying to shake off one of the most damaging stolen e-mails released by WikiLeaks so far. 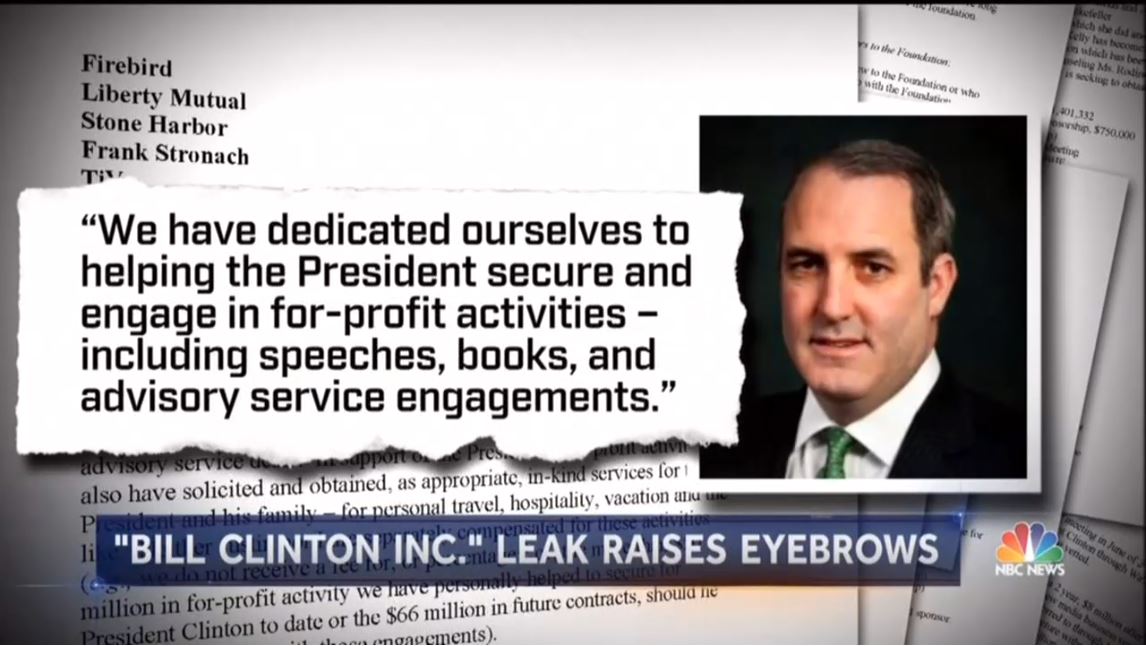 An unprecedented moment, two first ladies, current and former campaigning together for the first time.

HILLARY CLINTON: Seriously, is there anyone more inspiring than Michelle Obama?

ANDREA MITCHELL: And putting to rest any echoes of past rivalries.

MICHELLE OBAMA: If people wonder, yes, Hillary Clinton is my friend. She is absolutely ready to be commander-in-chief on day one. And yes, she happens to be a woman. First ladies, we rock.

MITCHELL: Reaching out to women, young people, minorities, with an emotional appeal for them to vote against Donald Trump.

OBAMA: When you hear folks talking about a global conspiracy, and saying that this election is rigged, understand that they are trying to get you to stay home. They are trying to convince you that your vote doesn't matter. Are you with me? I can't hear you? Are we going to do this? 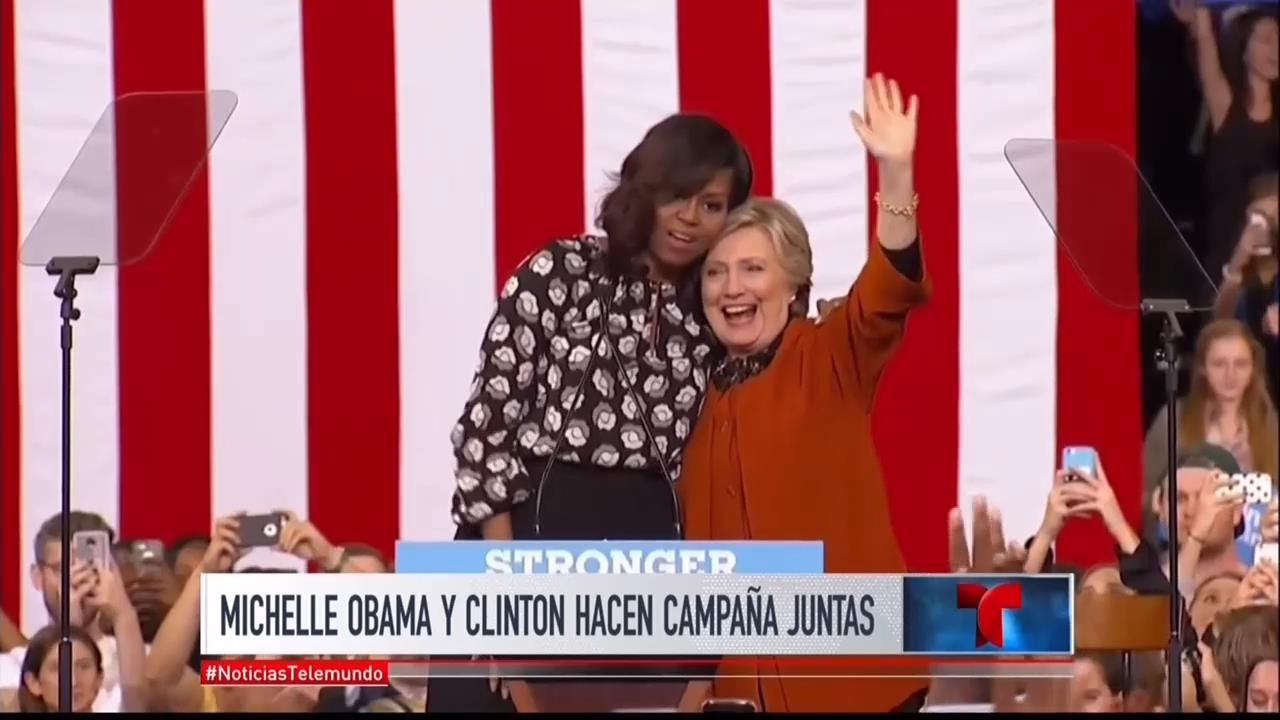 "We have dedicated ourselves to helping the president secure and engage in for profit activities including speeches, books and advisory service engagements." In all, band says he secured more than $50 million for the former president. But no indication Hillary Clinton ever did anything for those donors when she was secretary of state. Still, reinforcing suspicions long held about the Clintons.

AL HUNT: I think they should have disassociated themselves from the Clinton foundation the minute she became secretary of state. I don't think it is a smoking gun I don't think there is any evidence of pay to play.

MITCHELL: The Clinton campaign’s hope, it's not the hacked memo but Michelle Obama's message that will drive people to the polls. Andrea Mitchell, NBC news, North Carolina.