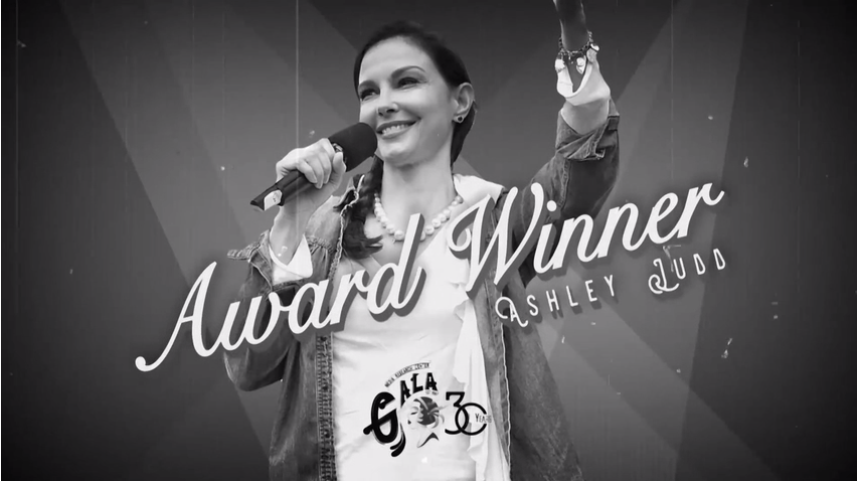 Conservative syndicated talk radio host and WMAL personality Chris Plante was the presenter for this category and, after introducing each clip, he allowed audience members, via electronic device at each table, to vote for which one of four possible celebrities embarrassed themselves the most in the past year.

Once Judd was deemed the winner in a landslide, Act for America Founder and Chairwoman Brigitte Gabriel accepted the “DisHonor” in jest on Judd’s behalf.

Gabriel told the boisterous crowd that “President Donald Trump is living at the White House while Hillary is at Costco signing books in the milk aisle” at “half-price...perfectly nestled between a pallet of toilet paper and bottled water on the other side.”

“Thanks to you all. The supporters who stand behind MRC and make their work possible because you are not only supporting this organization, but you are supporting the future and policy and the shaping of the future for our country,” she stated.

As for Judd’s quote that put her on the way to victory, she recited a poem during January’s Women’s March submitted by a college student that, needless to say, was incendiary and vulgar. Here’s an excerpt:

I am a nasty woman. I’m not as nasty as a man who looks like he bathes in Cheeto dust, a man who’s words are a death trap to America, Electoral College-sanctioned hate speech contaminating this National Anthem....I am not as nasty as a swastika painted on a pride flag and I didn’t know devils could be resurrected, but I feel Hitler in these streets. A mustache traded for a toupee. Nazis renamed the cabinet.

Plante mentioned that Judd won “with 69 percent of vote, which is Bill Clinton’s favorite number...God bless ‘em all.”

In second place, HBO’s Real Time host Bill Maher had 23 percent of the vote. Plante noted that Maher “usually wins something at these dinners” and thus made Judd’s 69 percent an upset. While discussing the humanitarian disaster in Syria, Maher argued on April 21 that the climate change was why the civil war was taking place:

The Syrian problem started with climate change. It did – 75 percent of Syrian farms failed. A million and a half people migrated to the cities. That’s where it began. And, by the way, these people who are starving, which is, you know, whether you’re bombed or you’re sarin-gassed or you’re starving, death is death. But, I mean, we talk about Assad gassing people, we’re gassing them, too. We’re just doing it slower with CO2.

Pirates of the Caribbean saga star Johnny Depp came in third with only seven percent of the vote for a June 22 quote suggesting President Trump should be assassinated: “Can you bring Trump here?...I think he needs help...When was the last time an actor assassinated a president?...It’s been a while and maybe it’s time.”

Way back in last place, Will & Grace star Megan Mullally fetched a mere one percent of the vote for this sad story on the December 14, 2016 Late Show with Stephen Colbert about how much she was going to miss Barack Obama as President:

He was charming and amazing, and then I said, ‘Listen, I really love you and we don’t want you to go. And he gave me a hug and he said, ‘We’re not going anywhere.’ And he walked out the door and, I mean, I’m not talking about like the cute, single tear — I mean, burst into wrenching sobs, doubled over....I mean, that’s the greatest President and First Lady in any of our lifetimes.

Plante chalked up her finish to being due to the fact that “nobody knows who she is.”

> For our “Quote of the Year” item on “Every Single Person We Don’t Like in the Liberal Media,” please go check it out here. The entire profession also won the Trumpocalypse Award and we have a recap of that as well.

> The night wasn’t complete without a Brian Williams mention and he won the “Dan Rather Memorial Award for the Stupidest Analysis.” For a story on that, go here.

> Also, CNN presidential history Douglas Brinkley scampered away with the “Last Gasp Obamagasam Award.” We have a post about that here.

> To hear Mark Levin praise the MRC and Brent Bozell, saying, “I rely” on them, go here.

> Perhaps the highlight of the night was the speech by conservative icon and talk radio host Rush Limbaugh. And yes, we have the full video and quotes from that as well here.