Every Single Person We Don’t Like in the Liberal Media eventually won “Quote of the Year” at the Media Research Center’s 30th Anniversary Gala featuring the 2017 DisHonors Awards on Thursday, but it also came away with the “Trumpocalypse” Award moments earlier in the evening. 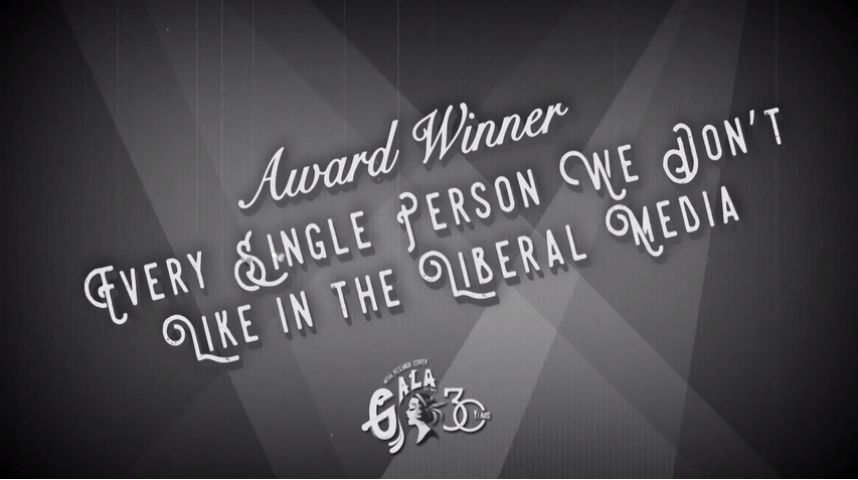 Fox News contributor and The Federalist’s Mollie Hemingway presented this category and, instead of having attendees vote for the winner, she immediately declared Every Single Person We Don’t Like in the Liberal Media as the winner.

In other words, there were so many quotes so it was just impossible to pick one.

Representing Every Single Person We Don’t Like in the Liberal Media, attendees laughed at a video compilation from liberal journalists reacting to the election of President Trump. Journalists featured in the video included Mika Brzezinski, Tom Friedman, Mark Halperin, Van Jones, Terry Moran, Ana Navarro, and Keith Olbermann to name a few.

Once Hemingway proclaimed Every Single Person We Don’t Like in the Liberal Media as worthy of this DisHonor, former CNN political commentator (and NewsBusters blogger) Jeffrey Lord accepted the award, in jest, on their behalf.

Lord humbly told attendees that his controversial firing from CNN “is nothing” compared to the liberal-media collusion efforts to destroy other conservatives:

What has been tried in the past with Rush, what they were trying to recently with Sean Hannity, what Bill O’Reilly said the other day to Laura Ingraham they’re going to try to do to you, they will try and do this. The objective is to take every last conservative who has any voice off of television and radio and those of you in this room are the backbone of the resistance. When you talk about — when you see the word “resist,” my suggestion is resist The Resistance.

> For our “Quote of the Year” item on Every Single Person We Don’t Like in the Liberal Media, please go check it out here.

> The night wasn’t complete without a Brian Williams mention and he won the “Dan Rather Memorial Award for the Stupidest Analysis.” For a story on that, go here.

> Also, CNN presidential history Douglas Brinkley scampered away with the “Last Gasp Obamagasam Award.” Here's our post about that category.

> To see Mark Levin praise the MRC and Brent Bozell, saying, “I rely” on them, go here.