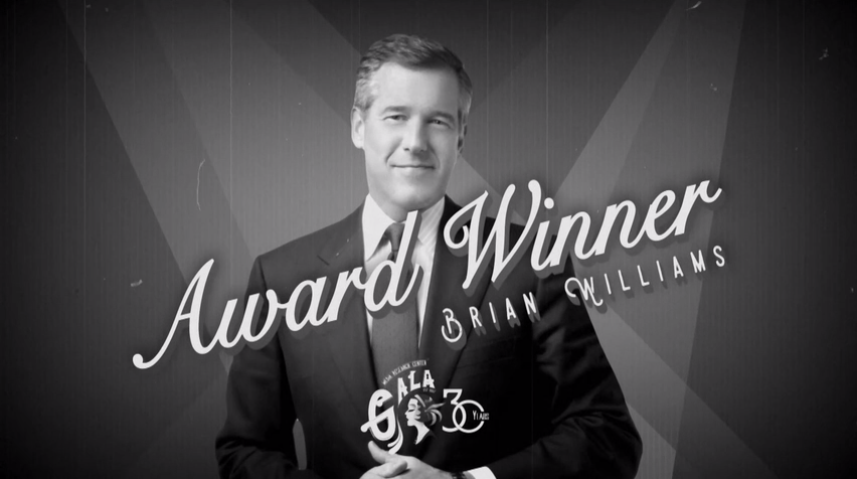 Not surprisingly on Thursday, Lyin’ Brian Williams prevailed during the Media Research Center’s 30th Anniversary Gala featuring the 2017 DisHonors Awards as the winner of the “Dan Rather Memorial Award for the Stupidest Analysis” thanks to an absolutely bonkers quote about life in communist Cuba.

Meadows joked that Williams “would have been here, but he’s flying in a helicopter somewhere over Iraq.”

During his remarks, Meadows implored conservatives to “stay engaged” and thanked both Brent Bozell and the MRC for allowing conservatives to have “a level playing field where real conservatives can speak up and truly know that their voice will be heard.”

In the end, Williams won by defeating himself (yes, he had two quotes nominated), The View’s Sunny Hostin, and NBC News foreign correspondent Lucy Kafanov. Votes were tallied by a voting device at each table which was used to relay the consensus of those at each table.

Williams called into MSNBC just past midnight on November 26, 2016 to opine on the death of murderous Cuban dictator Fidel Castro and had this observation of Cuban transportation: “It’s still one of those nations [Cuba] where you see donkey carts alongside cars, trucks and buses in downtown Havana, because that’s exactly what they’d rather have for transportation.”

NBC News foreign correspondent Lucy Kafanov came in second place with this asinine nostalgia for the murderous Soviet Union during a story on the June 11 NBC Nightly News:

The government last year said nearly twenty million Russians lived below the poverty line on less than a $139 a month. It wasn’t always like this. In the Soviet era, most villagers worked on huge collective farms. Life wasn’t easy but the government provided for the people. All of that came to an end when the Soviet Union collapsed....“It would be so good to live like before,” she tells me, “Under communism, there were plenty of jobs and plenty to eat.”

Back in third place, The View’s Sunny Hostin found herself here after claiming on May 3 that former FBI Director Jim Comey and white people were why the country’s “most qualified candidate for president” didn’t win.

Brian Williams was lucky he won with his other entry as his second quote finished dead last. On July 28 after the so-called skinny repeal effort to rid the country of ObamaCare failed, Williams swooned over Republican Senator John McCain (Ariz.) having “a moment of moral courage” to help Democrats save ObamaCare.

> Meanwhile, Every Single Person We Don’t Like in the Liberal Media won the “Quote of the Year” Award. For our report on that, go here.

> Every Single Person We Don’t Like in the Liberal Media also prevailed in the “Trumpocalypse Award” category. We have the full story on that category here.

> Also, CNN presidential history Douglas Brinkley scampered away with the “Last Gasp Obamagasam Award.” As with the other categories, we have an item about Brinkley's victory here.

>> For a full rundown and all the video, check this section on MRC.org devoted to the evening. And all the posts on NewsBusters<<