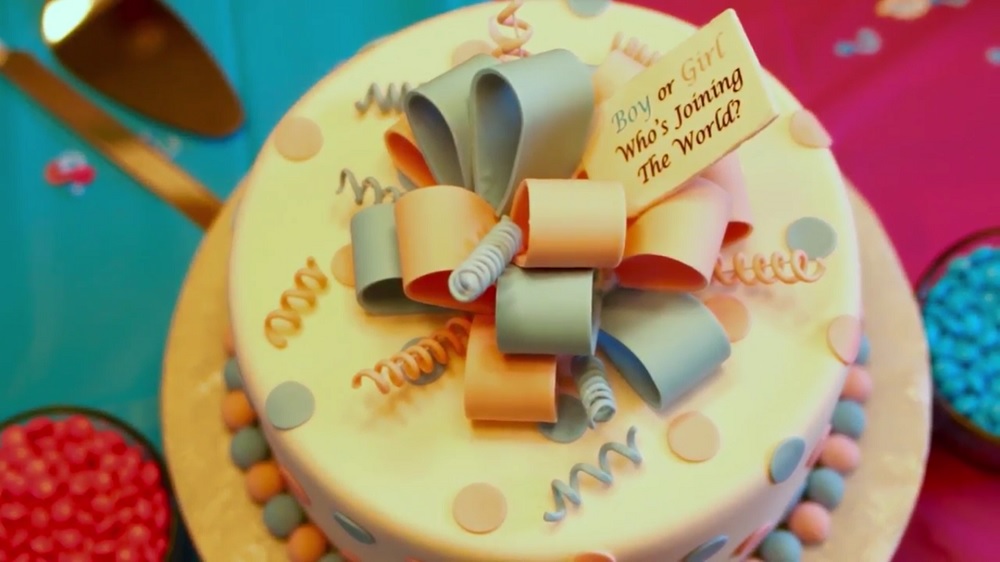 Diane Stopyra attacked the new phenomenon of gender-reveal parties for pregnant women in a Sunday item for Cosmopolitan. Stopyra contended that such celebrations are "potentially damaging to said tiny humans," and that they exclude "a cross-section of the population out, adding to a culture of trans and intersex shame." The feminist writer also took aim at baby showers in general, and claimed, "We'd be better off showing the little girls in attendance that changing the world is every bit as much a female prerogative as bedazzling onesies."

Stopyra's opinion piece, which originally appeared in sister publication Marie Claire on Wednesday, carried the blunt title, "Dear Parents-to-Be: Stop Celebrating Your Baby's Gender" (and the subtitle, "Cutting into a pink or blue cake seems innocent enough—but honestly, it's not."). The freelance author led with an account about her negative experience at a recent baby shower: "If you're like me—a woman in her early 30s—your weekends are increasingly planned around these pastel celebrations...And, if you're like me, you swallow your feminist pride long enough to eat fetus-shaped cookies, finger-paint bibs in gender normative colors, and support a pregnant friend. I've accepted that, when it comes to the baby industrial complex, there are some things I'm better off embracing…no matter how antiquated or absurd."

The "environment heavy" writer, as she puts it on her Twitter profile, continued with her first volley at gender-reveal parties specifically: "But I cannot stomach the latest fad of the knocked-up set: gender-reveal parties. The It's A Boy/It's A Girl fetes have been an economic boon to stationary companies and party supply stores nationwide....But despite the popularity, the ritual is a lot like a rousing game of Pin-The-Umbilical-Cord-On-The-Newborn: cutesy in theory, taxing in practice." She soon explained her feminism-based argument against this trend:

...[M]y discomfort with the gender-reveal party goes beyond my standard objection to fanfare surrounding gestational markers—which is primarily that, because we don't celebrate non-pregnancy-related milestones with the same enthusiasm, we're reinforcing the archaic notion that a woman's value rests squarely in her ability to grow tiny humans. The issue with gender-reveal parties in particular is: Aren't they potentially damaging to said tiny humans?

For starters, gender-reveal parties don't actually reveal gender—they reveal anatomy. Gender is a wholly different thing, inextricably tied to the social constructs around it. (Fun fact: Blue used to be the color most associated with little girls, due to its association with the Virgin Mary. But Hitler—yes, Hitler—feminized the color pink by forcing gays to wear triangles in that shade during World War II.) A gender reveal conflates the two.

Stopyra supported her Hitler claim by linking to a 2015 book from Oxford University Press titled "The Luxury Economy and Intellectual Property." The citation appeared in an essay in the book by University of New Hampshire Law Professor Ann Bartow. However, mainstream articles by NPR and Smithsonian magazine about the history of blue and pink as colors for the sexes do not mention this supposed Nazi connection.

The Cosmo/Marie Clare author also cited City University of New York Professor Carly Gieseler, who wrote an academic paper about gender-reveal parties in 2016. Gieseler asserted, "Some of the themes we're seeing are so backwards and biased." She outlined, "I'm thinking of 'Tutus or Touchdowns' and 'Bows versus Badges.' Women can't become a sheriff and wear a badge? At a time when these expectations about gender are eroding, this type of ritual is working against that progress. We're affixing a label to a child who hasn't even had a chance to enter the world and assume that identity."

Stopyra then spent the following six paragraphs on the plight of intersex and "trans-sexual" people:

Projecting gender perceptions onto a fetus becomes especially thorny when you take into consideration that, globally, one in every 1000 to 1500 children is born with a visible form of Difference of Sex Development (DSD), which means being neither entirely male nor female, since the chromosomal/genital makeup falls somewhere in between....Then there are the millions of kids assigned a sex at birth with which they don't align: 150,000 American teenagers identify as transgender. In a ritual that celebrates only a binary way of thinking about identity, we're leaving a cross-section of the population out, adding to a culture of trans and intersex shame. And for what? Confetti poppers?

Near the end of her piece, the writer left her ideologically-based polemic against gender-reveal parties and adopted a new attack against such bashes: "Some readers will roll their eyes at these arguments, I'm sure, complaining that America is overwhelmed with political correctness and that there's nothing wrong with some guns-or-glitter-themed fun before the birth of your baby. So instead consider this most basic criticism of the trend: It's a little, well, narcissistic."

Stopyra conceded, "This is not to say that everyone who's ever hosted a gender-reveal party is a raging egomaniac with a Kardashian-level selfie collection. But the trend may have started out that way...And thanks to social media, there's a keeping-up-with-the-Joneses factor at play." She concluded with one final appeal for a feminist future: "[M]aking guesses about anatomy under a canopy of tissue paper pompoms is doing little to assuage a new mom's very real fears about motherhood, nor is it sending a great message to any of the kids running around the yard. We'd be better off showing the little girls in attendance that changing the world is every bit as much a female prerogative as bedazzling onesies. And that step one is celebrating who—not what—a child will be."