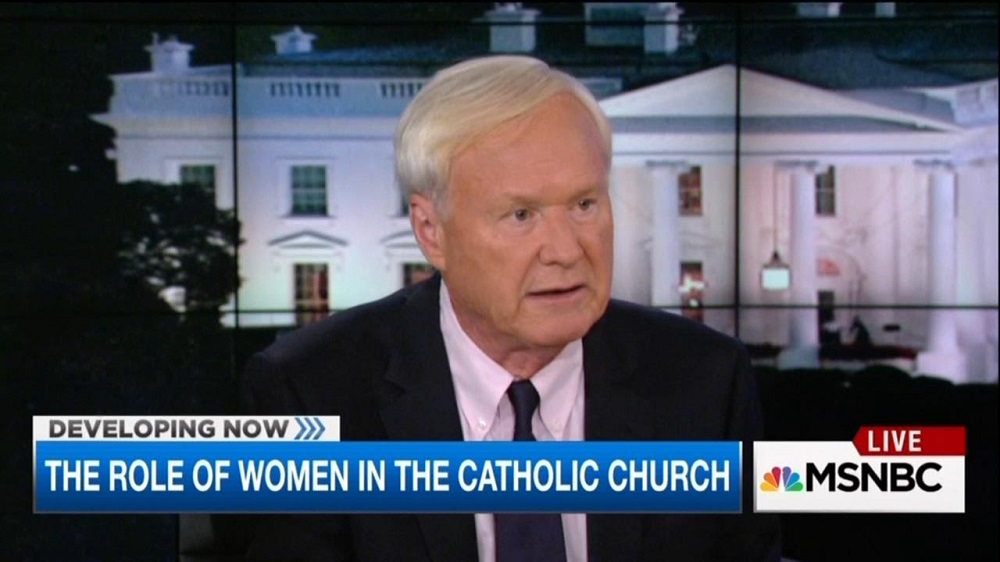 MSNBC's Chris Matthews revealed his loathing for a part of his Catholic upbringing on Wednesday's Hardball, and ended up mangling the theology behind a beautiful and ancient Church ritual for new mothers. Matthews turned to Catholic dissident Sister Simone Campbell for her take on Pope Francis's visit. Sister Campbell touted her liberal "Nuns on the Bus" campaign as a supposed way to "take the Gospel to where it wouldn't be otherwise, and all the other people that we meet along the road – so many of them are not churched...but that we can be in touch with them."

The sister's statement prompted Matthews to reply harken back to his younger years: "Remember how the word 'churched' used to be used?...which one of you two wants to remind us how bad it was? Remember being 'churched'? You had a baby; then, you had to go to church, and you had to be cleansed – cleansed for having a baby....It's so strange." [video below]

The host's rant came moments after he offered his odd take on why the Catholic Church doesn't ordain women. Matthews then zeroed in on how after Pope Francis left the residence of his nuncio (ambassador) near the Vice President's residence, "You saw that these very humble nuns come out – they're the ones that take care of the pantry, and they clean the place up, and they make the food. That's fine, but that's all they're allowed to do! That's the weird part." He then turned to Sister Campbell for her analysis, who replied by boosting her "Nuns on the Bus" tour.

Matthews replied to his guest with his "how bad it was" outburst and his claims about the "churching" of women. Sister Campbell seemed unfamiliar with the ritual. However, Joan Walsh, who also appeared during the segment, used the discussion to return to the women's ordination issue.

Who knows where the MSNBC got this faulty impression of the ritual, but it should be corrected. Its official name in Latin is benedictio mulieris post partum (the blessing of women after giving birth), and was done in thanksgiving for God's gift of the child. The text of the prayers used during the "churching" of the new mother doesn't mention impurity at all. In fact, it invokes the protection of God:

Save your handmaid, Lord, who hopes in Thee, my God. Send her help, Lord, from the sanctuary and defend her out of Sion. Let not the enemy prevail against her or the son of iniquity approach to hurt her....Almighty, everlasting God, through the delivery of the blessed Virgin Mary, Thou hast turned into joy the pains of the faithful in childbirth; look mercifully upon this Thy handmaid, coming in gladness to Thy temple to offer up her thanks: and grant that after this life, by the merits and intercession of the same blessed Mary, she may merit to arrive, together with her offspring, at the joys of everlasting happiness. Through Christ our Lord. Amen.

The mother is then blessed with holy water, as is done in many rituals of the Catholic Church, as a reminder of her baptism. The rite is actually still used in many parishes where the pre-1970 form of the Mass is still offered. A similar "churching" ceremony also exists in parts of the Eastern Orthodox world, and in the Eastern Catholic churches that use the same liturgy as the Orthodox.

The transcript of the relevant portion of the segment from Wednesday's Hardball on MSNBC:

CHRIS MATTHEWS: Sister, they showed the – after the Pope left the nunciature – the embassy today across from the Vice President's house – that was all beautifully done. But then, if you kept on watching our network here, you saw that these very humble nuns come out – they're the ones that take care of the pantry, and they clean the place up, and they make the food. That's fine, but that's all they're allowed to do! That's the weird part. Your thoughts?

SR. SIMONE CAMPBELL, SISTERS OF SOCIAL SERVICE: But Chris – actually, when you look at the leadership that we've provided on the bus – I mean, we're able to take the Gospel to where it wouldn't be otherwise-

CAMPBELL: And all the other people that we meet along the road – so many of them are not churched – are not connected to church – but that we can be in touch with them. And I think I have, as a Catholic sister, I have a tremendous freedom to be in relationship – that spiritual leadership relationship without ordination. And a bunch of my sisters are – are chaplains-

MATTHEWS: So you can be a pastoral figure. You can advise people. You can counsel them-

MATTHEWS: Cleansed for having a baby-

WALSH: You couldn't – you could be unchurched –

CAMPBELL: I don't think we had that on the West Coast-

WALSH: And to be unchurched was also – was a terrible thing. So yes, I'm sure Sister means that in a – in a different way-

MATTHEWS: My mom had to do it. If you had a baby, you were unclean. Therefore, you had to go to church and be cleansed for having had a baby-

MATTHEWS: It's so strange-

WALSH: And this is the thing that breaks your heart. I love this pope. I respect him. I admire him for what he's doing for the world. But as he's here on his listening tour, I really hope he listens to the voices of women – who found it so painful, so hurtful to hear one of the first things out of his mouth – say, no. I'm absolutely closing the door to this.

MATTHEWS: Well, I think he should open it at least to married couples. That can start – be the beginning of it – not just former Episcopalian priests-

MATTHEWS: You know, people can join, because we could use some nice families running the Church.