Jim Edwards, the deputy editor of the Business Insider website, and Slate.com's tech reporter Will Oremus slammed former Mozilla CEO Brendan Eich on the Friday edition of BBC World Service's World Have Your Say program. Edwards likened Eich's $1,000 donation in support of California's Proposition 8 to someone who "donated some money to the KKK." The editor also repeatedly accused the tech executive of "donating money that strip people of their civil rights."

The Business Insider editor later compared the former CEO's support of traditional marriage to supporting the "the civil right to own slaves," and defended this comparison, since "slavery is all about stripping other people of their rights, which is what being against gay marriage is all about." Oremus agreed with Edwards in labeling Eich's political donation as "beyond the pale," and defended the internal and external campaign by social leftists to force his departure: [MP3 audio available here]

WILL OREMUS, SENIOR TECHNOLOGY REPORTER, SLATE: ...I think that he was right to step down, and I think that Mozilla was right, ultimately, to apply the pressure on him to step down. Now, I don't think that means that every CEO in America needs to be pushed out for their views on gay marriage. But I think this was a case where you have a company, operating in a liberal Bay Area environment, where it is now a fringe position to be anti-gay rights. It is not considered okay. I think that's a direction that the entire country is going to move in over time, and I think that's a good thing.

BBC host Krupa Padhy brought on the two journalists, along with NewsBusters contributor Kathleen McKinley; former Mozilla employee  Brandon Savage; Breitbart.com's Ben Shapiro; BBC technology reporter Dave Lee; and LGBT activist John Aravosis. Five and half minutes into the half hour-plus discussion, Padhy turned to Oremus and asked for his take on the controversy. The reporter replied by giving his " Mozilla was right...to apply the pressure on him to step down" answer – repeating his main points from his Thursday piece on Slate on the issue.

Three and a half minutes later, Edwards, who is a former contributor to the far-left magazine The Nation, along with ideological fellow traveler Salon.com, led into his KKK comparison by outlining a hypothetical meeting between Eich and Apple CEO Tim Cook, and hinted at the fact that Cook is an open homosexual. Shapiro attacked the editor after he dropped the reference to the anti-black, anti-Catholic, anti-Semitic cabal, and highlighted the fact that President Obama once supported traditional marriage: 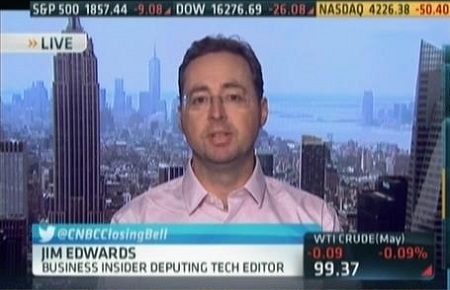 JIM EDWARDS, INVESTIGATIVE REPORTER, BUSINESS INSIDER: ...We should point out, to Brendan Eich's credit, he did not bring his politics into the workplace; and also, he voluntarily resigned. He wasn't fired. But think of it this way: this is a guy who is the head of the Firefox browser – conceivably would meet Apple CEO Tim Cook – Tim Cook being the head of the most important tech company on the planet probably. These two guys are in a room: one of them believes he has more rights than the other, and that the other guy has fewer human rights than he does. How is Tim Cook supposed to react to that? How is he supposed to deal with that? That's crazy.

EDWARDS: An analogy would be – you know, if this guy had donated some money to the KKK, and was then meeting with a company run by a black CEO. It's just – it's beyond the pale. Once you are donating money that strip people of their civil rights, you have stepped beyond the pale.

SHAPIRO: For you to compare – for anybody to compare the position – by the way, held by Barack Obama in 2008...to be pro-traditional marriage...with the KKK just demonstrates the absurdity to which this conversation has now languished. The idea that – that Eich couldn't do business with Tim Cook – obviously, he could.....And again, please name an instance in which Eich's – his personal position on any of this impacted his ability to do business with anyone. I'm still waiting for any evidence of that. This is nothing less than a bullying campaign by a lot of people who don't like anybody who has a religious viewpoint on the issue of marriage. It is religious discrimination by-

EDWARDS: I mean, the evidence is right there! You know, the entire Mozilla organization – all the way up to its board of directors – was completely distracted by his extremist opinions on – on gay rights. That is why he's out. He stepped aside, because he derailed the organization almost immediately upon his promotion.

Later, Padhy noted how Savage referenced privacy as a major issue related to the Internet and wondered whether "it's an invasion of his [Eich's] privacy by having this outrage against his position." The former Mozilla employee defended his former colleague's reputation, but Edwards and Oremus pounced to again attack the now former Mozilla executive: [MP3 audio of this exchange available here]

BRANDON SAVAGE, FORMER MOZILLA EMPLOYEE: I would agree and – and the disclosure of those donation records – I believe was a court decision – and I don't have the facts to back that up, but I believe it was a court decision that those records be disclosed. And if they had never been disclosed, this would never be an issue. You know, Brendan is not out on the corner with a sign saying, I hate gay people. He gave money to an organization, and – and his donation – his right to speak should not – not cause him to lose his job, as along as-

EDWARDS: Well, hold on; hold on. There's a flaw in what you're saying there, because he may have made his donation privately, but what his donation was funding was stripping rights from a huge number of people in California. In other words, the effect of his donation was very, very public, and it just seems unfair to me that people should be able to donate secretly and expect that to remain private – when what they're actually doing is an extremely public act. They're stripping people of their civil rights.

OREMUS: I agree, and there's a very important distinction to be made here between someone's political views on an issue like tax hikes, or a matter of domestic policy, and someone who take a position that clearly indicates that he believes some people deserve fewer rights than other people. Someone mentioned the phrase 'beyond the pale.' I mean, that's really what we're talking about here.

A lot of the people who were criticizing the – the people who put pressure on Eich to step down are – are saying that, well, if Eich has to step down, then everybody has to step down because everyone has some political views that other people disagree with. I think that's – that's certainly true that everyone has controversial views, and we would not want to live in a society where no one can be CEO of an organization unless everybody agrees with every view that they hold.

But that's not what anyone is arguing here. What people are saying is that, at this time and place, being against equal rights for gay people is not okay. It's not okay in the way – and these aren't perfect comparisons – but it's not okay in the way that it's not okay to be against interracial marriage, or to be an anti-Semite, or to be a Nazi. There are some things that are not okay, and some things that are okay. And we're saying that this one is not okay, for a guy to be a leader of an organization like Mozilla.

The BBC host then turned to McKinley, who, like Shapiro, cited Obama's past support of traditional marriage, and cited another former colleague of Eich's at Mozilla, who pointed out that he treated everyone there with respect:

KATHLEEN MCKINLEY: Well, I have two points to make: if the CEO of Mozilla could lose his job for a donation that he made for traditional marriage six years ago, then shouldn't President Obama lose his? Because he had a much more open – much more influence on the country by saying he was against gay marriage when he was president. So, it would seem to me that he would be the one who should lose his job for what he believed six years ago at the same time.

And the second thing I would like to say is that a gay colleague at Mozilla had said that he [Eich] never discriminated against anyone; he never showed any preference; any difference; never showed any hatred for anyone. So, he was doing a good job, and he wasn't discriminating against anybody. So, if anyone's civil rights are being trashed here, it is his civil rights to be able to give to a political organization of his choice, and not have his job be in jeopardy. I think all people should be chilled by this. And I would think I would agree with that, even if it was several years ago and he was fired for giving a donation to gay rights.

As before with Shapiro, the two left-wing journalists counterattacked with their slams of the former CEO.  Edwards also used the slavery card in his part of the salvo: [MP3 audio of the end of McKinley's remarks above, along with her exchange with Oremus and Edwards available here]

MCKINLEY: Being able to give a political donation without being targeted and harassed and witch-hunted is also a civil right.

EDWARDS: I think – I think the comparison is really easy for a couple of reasons – because, first of all, Americans in the South used to literally argue in the favor of the civil right to own slaves. And second of all, slavery is all about stripping other people of their rights – which is what being against gay marriage is all about. So, I'm actually rather pleased with this parallel.

OREMUS: And these are all the same arguments that we heard from opponents of civil rights in the 1960s....

MCKINLEY: So you're saying that Obama (audio fades out momentarily) – you're comparing that – up until two years ago, he believed – in the same parallel as owning a slave. That's what you're saying?

PADHY: I think what we're trying to get to the point here is – is how do we decide which issues can, kind of, push us to this – to this point? Is it race? Is it gender? Is it your sexuality? Why is gay rights here the issue that has pushed us to this point?

OREMUS: Because this is the last major civil – this is – you know, the last frontier of basic civil rights for large groups of people in America. I think this is – this is the civil rights issue of our time. And I think that's why people take it extremely seriously, and put it in a different class than someone's views on other issues of policy.

SHAPIRO: I don't think anybody here is arguing, by the way, that Mozilla doesn't have the right to do what it wants to Brendan Eich as far as his political viewpoints. They do have the right, under the Constitution, to do exactly that. I think what we're arguing about is whether it's right or wrong for a company to now be pressured into firing employees for their personal political views, no matter what those views may be. I'm Jewish. If Brendan Eich had been a Holocaust denier, but he treated Jews decently at his company and nothing had – and he had not discriminated against Jews in any of his business dealings, I'd hold exactly the same position.