UK Journo: Unlike Corbyn, Bernie 'Wouldn't Have Whiff of Anti-Semitism About Him'

In one short sentence, a British journalist has betrayed his ignorance—if not his deliberate misrepresentation--of UK and US politics. On today's Morning Joe, Ed Luce, the Financial Times's chief US commentator, said that if Bernie Sanders were the Democrat candidate, that unlike Jeremy Corbyn:

"[Sanders] wouldn't have the whiff of anti-Semitism about him."


First: Corbyn doesn't have a "whiff" of anti-Semitism about him—he has the putrid stench. Second: could Luce, who is based in the US, possibly be unaware that of all the Democrat candidates, Sanders is the most anti-Israel and is surrounded by anti-Semites?

We commend to Luce's attention this article: "Bernie Sanders has an anti-Semitism problem." Wherein it is noted, for example, that Sanders' deputy director of constituency has written often of "Jew money." And among Sanders' prominent supporters are  Linda Sarsour and Ilhan Omar, both of whom have done more than dabble with anti-Semitism.

In contrast with Luce, it was Donny Deutsch who had a rare moment of . . . lucidity this morning. He said that notwithstanding a new poll showing Sanders and Elizabeth Warren beating Donald Trump, either would be "devastated" by the president in 2020. Declared Deutsch:

"I do not believe that any of those hard-left candidates come close to beating Donald Trump."

Luce is a lefty, as you can see from one of his recent tweets, where every Trump supporter is a liar: 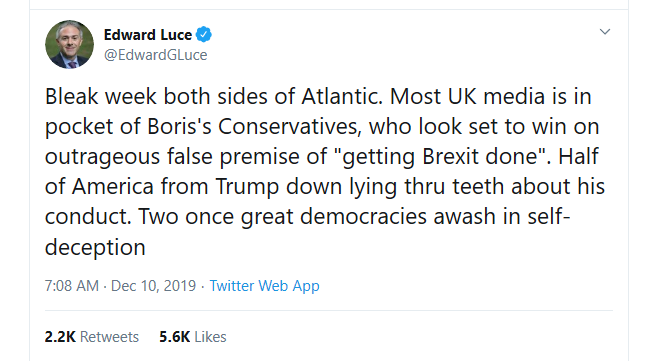 MIKA BRZEZINSKI: In the hypothetical match-up, Senator Bernie Sanders beats Trump by six points, 49% to 43%. Joe Biden leads Trump by a seven-point margin, 48% to 41%. Elizabeth Warren slides by the president 46 to 45.

DONNY DEUTSCH: I must have woken up open the wrong side of the bed this morning --

DEUTSCH: -- because I look at those polls and I go back to where we opened the show, with what happened over on the pond there, when you ran a hard-left candidate and they got destroyed the worst in almost a century.

I look at those polls, particularly where I see Bernie Sanders and Elizabeth Warren ahead of Trump, and I go, I’m not looking at those polls, cause that’s baloney. They get devastated. And the economy is continuing to roar. And I think, the Biden opening, where he talked about dividing, and it’s a different way of dividing us, and it’s this kind of absolute, you’re either on our team or you’re on the other team if you don’t subscribe some of these socialistic tenets. Boy, they better watch out. If Democrats are looking at those polls and feeling good about themselves, they shouldn’t. I do not believe that any of those hard-left candidates come close to beating President Trump.

ED LUCE: I suspect Sanders, if he were the nominee, would have a pretty active verb [?], and a pretty clear message. And he wouldn't have the whiff of anti-Semitism about him [unlike Corbyn] either.