Bill Clinton has lost his fastball. That's an emerging theme from this campaign season, and it was on glaring display on today's Morning Joe.

Introducing a clip of Clinton [dressed like a lumberjack] attacking Bernie Sanders in New Hampshire, Mika Brzezinski said the ex-prez had picked up the "hatchet"—not a good image for a would-be statesman. After the clip aired, Joe Scarborough called it "painful." Mike Barnicle said it was a "cringe" moment, with Chuck Todd seconding the assessment.

Note: Jeb Bush took a lot of flack last week when he asked a crowd to clap. Clinton did something similar in the clip, telling people "I want you to laugh," despite the grim tone of his attack.

MIKA BRZEZINSKI: While his wife was in Flint, Michigan, former president Bill Clinton picked up the hatchet in New Hampshire, upping his attacks on her lone remaining primary opponent.

JOE SCARBOROUGH: That's sort of a, sort of a harsh way to put it.

JOE: Picked up the hatchet?

MIKA: -- Mike Barnicle, oh you weren't at that one? Clad in red and black plaid, President Clinton tried to lay out the contrast between the former Secretary of State and the senator on everything from Wall Street, to paying to college, to health care and he called attention to the culture of so-called Bernie bros, telling the stories of women supporting Hillary Clinton online who have been trolled by Sanders backers.

BILL CLINTON: She and other people who have gone online to defend Hillary and explain, just explain, why they supported her have been subject to vicious trolling and attacks that are literally too profane -- not to mention sexist -- to repeat. All four of them have been subject to these unbelievable personal attacks. From people, how dare you be a part of the establishment? So now we've been told that Planned Parenthood, the Human Rights Campaign fund is part of the establishment. It's a hermetically sealed deal. If you're not for us, the Boston Globe, the Concord Monitor, the Portsmouth newspaper, they're all part of the establishment. Except the Nashua paper, they endorse her, too, but Bernie took what they said good about him and put it in under all these endorsements, except they didn't endorse. Today they used a veteran's name saying he endorsed. He didn't endorse. But if you pointed out, just shows you how tied you are to the establishment. When you're making a revolution, you can't be too careful about the facts. You're just for me or against me.

I want you to laugh, because when you're mad you can't think. My mother told me when I was a boy and I was so mad at something somebody did, she said "Bill, any time somebody tries to get you to stop thinking, they are not your true friend." I just want you to think.

BERNIE SANDERS: Look, we don't want that crap [the Bernie bros trolling.] We will do everything we can and I think we have tried. Look, anybody who is supporting me and doing sexist things is -- we don't want them.

JOE: You know, Chuck, I -- watching Bill Clinton there, first of all, it's painful. Secondly, it reminded me a lot of South Carolina in 2008.

JOE: And Nevada in 2008. Remember when he was saying that people were chasing him around and saying that they were cheating in the caucuses there? It just, I don't get what's going on here.

TODD: I get what he's trying to do.

JOE: So what's he trying to do?

TODD: I think he's trying to get some -- I think they're trying to get some attention on what they believe, that Bernie Sanders is running a more negative campaign than he gets credit for. The Clinton campaign is very frustrated. They feel as if they say the smallest thing against him and the world comes crashing down on them. And they say, look what these guys are doing.

JOE: So does that work?

TODD: I didn't feel like that worked there. That's -- and was he trying to get the crowd to laugh with him? 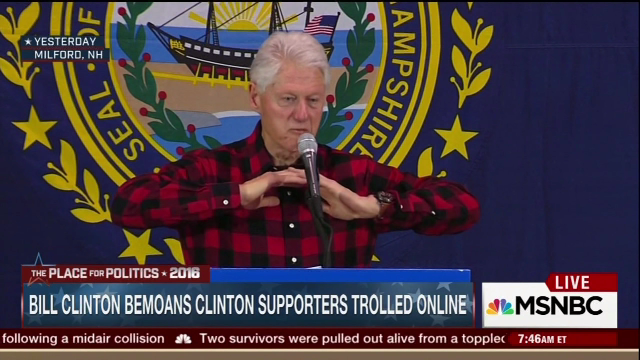