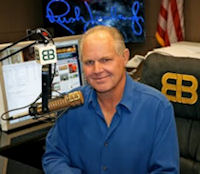 Rush Limbaugh is so reviled by the left, that even when he agrees with liberals and issues facts supporting their arguments, they criticize him and demand an apology.

The latest such group to deride Limbaugh for supposedly offensive comments that they themselves have supported is the Anti-Defamation League. The ADL has called on Limbaugh to apologize for suggesting that the Obama Administration's anti-banker populism has troubling anti-Semitic undertones. He did not suggest that Obama is an anti-Semite, nor that is policies specifically single out or target Jews. He did suggest that Jews who voted for Obama may be feeling "buyer's remorse" now that the administration is using language that has so often--historically--been used to demean and discriminate against the Jewish community.

Here is the quote in question: "To some people, banker is a code word for Jewish; and guess who Obama is assaulting? He's assaulting bankers. He's assaulting money people. And a lot of those people on Wall Street are Jewish. So I wonder if there's - if there's starting to be some buyer's remorse there."

The ADL was furious at Limbaugh, and issued a press release saying he "reached a new low with his borderline anti-Semitic comments about Jews as bankers, their supposed influence on Wall Street, and how they vote."

To the latter claim, Rush was not speculating about how Jews voted in 2008; it is a fact that they overwhelmingly supported Obama. According to Jewish news service JTR, "Obama received 78 percent of the Jewish vote - about 25 percent greater than Obama's percentage of total support nationally." So the ADL has no grounds for criticism here.

But ADL demonstrated profound hypocrisy in criticizing Limbaugh for simply recounting stereotypes of the Jewish community used throughout history as the basis for often violent campaigns against Jews. ADL itself has recalled these stereotypes since the beginning of the financial crisis in lamentations that the crisis had given "fodder" to bigots who were quick to lay blame for the nation's economic woes at the feet of Jewish bankers. History is replete with such shows of hatred and ignorance.

ADL lamented that Bernie Madoff's exposed $50 billion ponzi scheme had "given anti-Semites fodder for their bigoted views." ADL President Abe Foxman echoed this statement, telling MSNBC that the Madoff scheme had become "fodder for the bigots."

In discussing the financial crisis more generally, Foxman wrote, "concerns arose about possible anti-Semitic reactions. Our antennae were up because the most prominent elements of anti-Semitism are the charges that Jews have too much power and they are primarily concerned about money."

So, basically exactly what Limbaugh said.

It is obvious that Obama's hatred of "bankers" can clearly be construed by anti-Semites as coded language indicting Jews. It's no more ridiculous to suggest that Obama's emphasis on "bankers" is code that will embolden anti-Semites than to suggest that Nixon's emphasis on "states' rights" was code designed to embolden racists, as so many leftists do.

Indeed, while the notion of States' Rights is fundamental to the system of federalism institutionalized by our nation's Constitution, it has been perverted by those who would invoke the rights of the states to perpetuate racism, segregation, and subjugation. So too is Obama's populist language rooted in a sincere, if misguided, distrust of the wealthy. But like the language of states' rights, Obama's anti-banker rhetoric can be--and has been--co-opted by anti-Semites who use it as political cover for their hatred of the Jewish community.

And many Jews, indeed, have adopted some of Obama's terminology. It is hardly anti-Semitic to say, as Rush does, that Jews have picked up on Obama's borderline lingo. In fact, Rush's statements are precisely the opposite of anti-Semitic, as Foxman and the ADL should recognize - Rush is indicting those who would seize on Obama's "bankers" language to hurt Jews. And he is indicting Obama for using such incendiary language...

The Jews don't have many friends outside the conservative movement in the United States. When Foxman attacks those friends, he endangers Jews far more than he protects them. And that is a betrayal of his mission and the trust that so much of the Jewish community has placed in him.

Limbaugh has managed to engender criticism even from those with whom he agrees and whose causes he champions. The average person couldn't do that.