On 'View,' Chelsea Handler Brags About ‘Assaulting’ Conservatives in Airports 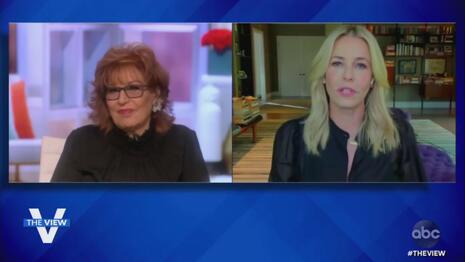 The hosts of The View were eager to have left-wing comedian Chelsea Handler on the show this week, after her public blow up on social media at rapper 50 Cent for saying he would vote Trump (then recanting). She was also asked about her very vocal and gross crush on New York Governor Andrew Cuomo, and how therapy helped her “rage” against Trump supporters.

Co-host Sunny Hostin asked Handler to explain what happened with the rapper whom she once dated. Hostin left out the part where Handler whitesplained to him how he’s only allowed to vote for Democrats. (Looks like she hasn't learned much from those racial sensitivity classes she boasted about on the show last year.)

But the comedian bragged how she got 50 Cent to recant his Trump support and announce he's now a Biden supporter. She also bragged again about offering him sex to switch his vote or paying his taxes herself:

CHELSEA HANDLER: Yes, and I understand. He called me the other night, two nights ago. We spoke for about a half an hour, and I, you know, I texted him. I DM-d him and I said, can you please call me about this? I don't want this to be public because I want to know if you are serious about supporting Trump. So he called me and he wasn't serious. He was just screwing around on his Twitter. He is supporting Joe Biden. He made that very clear to me, and he said that I was able to tell you girls and tell any other press I did that he is supporting Joe Biden. So -- and then we talked and, you know, had a cute little conversation. I did promise, you know, to pay his taxes and then I found out it's illegal to pay somebody to vote for your candidate. So I offered him another form of payment and we'll see if he takes me up on it, but I don't have to pay him. He's already a Biden supporter.

From there, co-host Sara Haines was excited to gossip with Handler about her "very vocal" pining for New York Governor Andrew Cuomo. "What is it about him?" Haines gushed. If this wasn't cringeworthy enough, Handler made it much more gross:

Well, first of all, he's like a big, giant -- I mean he came in like the Incredible Hulk, right? We needed somebody to come on the scene. We were so dehydrated for real leadership that when he came on the scene, you know, looking like this big Italian hunk, I was, like -- he said, wear a mask. I'll wear a mask. I'll put a mask on every part of my body. I want to flatten your curve. You can flatten my curve and then we can both apex together...

Co-host Joy Behar then asked Handler how therapy helped her deal with her "rage against Trump," saying she could "use a few tips" herself. The comedian explained how she used to lose it and "assault" people watching Fox News:

CHELSEA HANDLER: Oh my God. Well, I would walk into the airports, I would go to the first class lounge, check in and then run over to the Fox News section and start assaulting people. Like, I would go in and be, like, you're a racist and then I would run out and then I would run back in and go, do you want your daughter to have rights because she won't, and then I would run out. Then I would run back into the Fox News section and I would go, are you still a racist? I mean, I was out of my tree, and my level of outrage was just not -- I couldn't handle it anymore. I was just -- my veins were throbbing and I wanted to learn how to talk to Trump supporters or conservatives at this time in 2016. Now Trump supporters, I don't have anything to say to them anymore at this juncture, but I wanted to be able to have the conversations that I was being prevented from having because of my anger. So that really was the way to get into therapy and then I realized my anger, yes, I hate Donald Trump. Yes, I find him to be a white supremacist and I find all of his policies to be abhorrent, but my real anger was something that happened to me as a child that I had never dealt with. When we don't deal with our injuries, they creep up on us and tap us on the shoulder when we least expect it.

Weird, because Joy Behar actually made a similar admission to Handler's a year ago, telling her co-hosts she berated a Trump supporter while vacationing in London.

Home Advisor and Dove sponsored this segment whom you can contact by following the links provided.