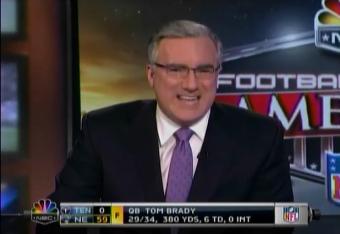 After conservative talk show host Rush Limbaugh was forced out of a consortium seeking to buy the National Football League's St. Louis Rams, there's evidence there is a double standard at play in the NFL.

Last week, NFL Commissioner Roger Goodell said that people in "responsible positions" in his league are held to a "higher standard," reacting to the notion that Limbaugh could be a part-owner of an NFL franchise.

"I have said many times before that we are all held to a higher standard here," Goodell said. "I think divisive comments are not what the NFL is all about. I would not want to see those kind of comments from people who are in a responsible position within the NFL. No. Absolutely not."

Analysis and video below fold

That's a question Fox News and National Public Radio contributor Juan Williams had for the NFL on the Oct. 18 broadcast of "Fox News Sunday," as NewsBusters' Noel Sheppard pointed out.

"Let me just come go back to something else Mara [Liasson] said, ‘Oh, it's a business decision, and people don't make divisive statements,'" Williams said. "I watch MSNBC sometimes, I see their talk show hosts, they're mocking liberals, going on, this is Keith Olbermann ... Conservatives are terrible, they're a bunch of jerks, blah-de-blah. And then he's announcing the game. Nobody says, ‘Well, because he makes divisive statements he can't announce an NFL game.' I don't see that."

And that's something Williams is dead-spot on with, if you take a closer look at Olbermann's nightly MSNBC show.

'Countdown': The Place for Conservative Bashing 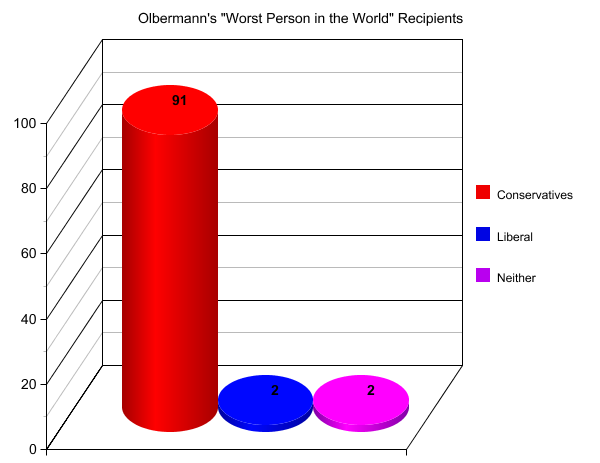 An analysis done by the Business & Media Institute indicated that since August 11, the beginning of NBC's coverage of the NFL, Olbermann has made conservative or right-leaning personalities the consistent target of his infamous "Worst Person in the World" segment.

The segment features three people of Olbermann's choosing to be the "Worse," "Worser" and "Worst Person in the World" set to Johann Sebastian Bach's Toccata and Fugue in D Minor. Since the beginning of football season Olbermann has named 91 right-leaning personalities or organizations as one of the three recipients, versus only two who could be perceived as left-leaning personalities or organizations. (Two others in the tally could not be defined as conservative or liberal.) That means Olbermann picks on conservatives 45 times more often than liberals - even worse than he used to be in 2006 when that ratio was only 8-1.

There have been only two times since Aug. 11 Olbermann has attacked his own – once for whoever started a rumor suggesting Glenn Beck may or may not have committed a crime, of course intended to disparage the Fox News host and the other – in defense of Limbaugh’s NFL bid.

"The bronze tonight to critics of Rush Limbaugh," Olbermann said on his Oct. 8 program. "You heard me - critics of Rush Limbaugh, ones who were bristling at the news he and hockey executive Dave Checketts might buy the NFL's St. Louis Rams, suggesting he should not be permitted to because he made racist comments about Eagles quarterback Donavan McNabb that resulted in Limbaugh's firing by ESPN in 2003."

But other than that, the segment has been nothing but conservative-bashing sessions meant to appeal to his rabid left-wing viewers. In fact, since the beginning of football season, no liberal or left-leaning personality or organization has been the winner of his "The Worst Person in World" segment.

The Worst of the "Worst Persons in the World"

Olbermann's critique of conservatives has hardly been light-hearted. The MSNBC host doesn't pull any punches, even if it means using hate-filled or misogynistic commentary.

For example, on his Oct. 13 program, Olbermann made some very disparaging remarks about conservative female blogger Michelle Malkin for her protest of what seems like the indoctrination of children in a school participating in a "song/rap" about President Barack Obama. The MSNBC host referred to Malkin as "a big mashed-up bag of meat with lipstick on it" (emphasis added):

"Runner up, Michelle Malkin. ... When this Obama song stupidity broke in New Jersey last month with elementary school kids there singing about the President, author Shariz Carney Nunez says she got an email from Malkin reading:

'I understand that you uploaded the video of schoolchildren reciting a Barack Obama song/rap at Bernice Young Elementary School in June. I have a few quick questions. Did you help write the song/rap and teach it to the children? Are you an. educator/guest lecturer at the school? Did you teach about your book, 'I Am Barack Obama,' at the school? Your bio says you are a schoolmate of Obama. How well acquainted are you with the President?'

That was at 6:47 in the morning. By nighttime, Malkin and the lunatic fringe had decided Carney-Nunez was responsible for the song and whichever plot their fevered little paranoid minds saw behind it. She received death threats and hate-filled voice mails all thanks to the total mindless, morally bankrupt, knee-jerk, fascistic hatred, without which Michelle Malkin would just be a big mashed-up bag of meat with lipstick on it. Ms. Carney-Nunez had nothing to do with the song. By the way, the fringe is out protesting at the school again scaring the kids. You know, exactly the way that psychotic pastor protests at military funerals."

And Olbermann's misogynistic tirades aren't relegated to just conservative media personalities, but also conservative female politicians. One of his favorite targets has been Rep. Michele Bachmann, R-Minn. On his Oct. 6 show, Olbermann targeted Bachmann, suggesting there was some sort of "slasher movie" going on inside her head, since she had been an outspoken critic of a health care reform proposal Speaker of the House Nancy Pelosi had been trying to force through Congress.

"But our, Congresswoman Michele Bachmann," Olbermann said. "Speaking about how Speaker Pelosi might handle Blue Dog Democrats over health care reform, Bachmann says, ‘she will either beat them to death, bludgeon them to death, or she'll try to buy them off.' Yes, don't let that out to lunch look behind the eyes fool you. There's some sort of slasher movie obsession going on inside that congresswoman. This is at least the second time she has applied violent imagery to the public discourse. Just last month, she had told her fellow Republicans that to stop health care reform, they needed to make ‘a covenant to slit their wrists.'"

Bachmann has been a regular recipient of Olbermann's "Worst Persons" tirades, having been awarded one of the three awards five times in the last two months.

In other words, Olbermann with one broad brush called millions of people "tin foil hatters, conspiracy theorists, paranoids and racists." Fox News' highest-rated show "The O'Reilly Factor" averages over 3 million viewers a night, three times as many viewers as Olbermann averages on a nightly basis.