Beginning on October 17, The Hill broke new stories on the Clinton/Russia/Uranium scandal that deserved extensive coverage. And while Fox News Channel has thoroughly covered the breaking developments they’ve been, unfortunately, the exception and not the rule in TV news.

From October 17 through November 2 The Big Three (ABC, CBS, NBC) networks have devoted a piddly 4 minutes and 38 seconds to the new findings. CBS delivered a pathetic 2 minutes, 34 seconds, followed by ABC at a scant 2 minutes, 4 seconds. Astoundingly, NBC News has failed to devote a single second to any of the most recent charges.

And prior to the October 17 findings the network evening shows had only spent a miserly 3 minutes and 1 second on the Clinton Foundation scandal in more than two years.

While CNN, MSNBC and PBS did offer some coverage of the scandal, they mostly did so in a dismissive manner as to snidely alert their viewers that Trump was out with a tweet on an old story that is meant to distract from his alleged Russia-collusion scandal. 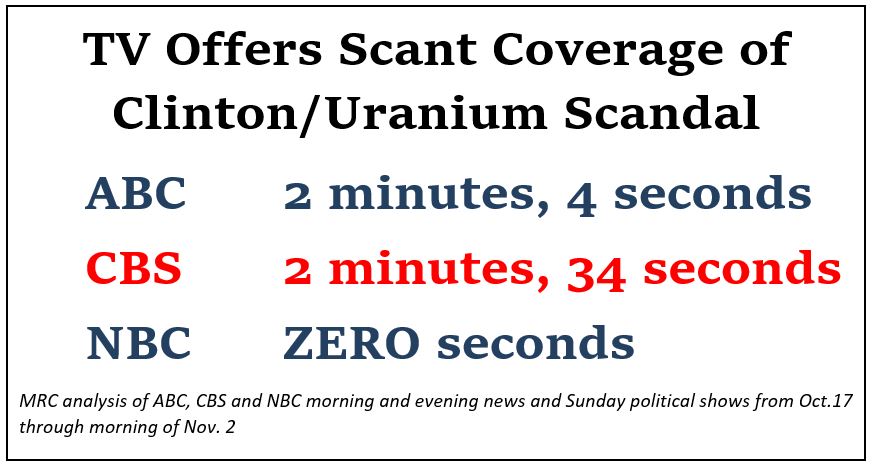 The following is a breakdown of the worst coverage of the latest Clinton/Uranium/Russia scandal developments:

Bribery, bullying of an informant and a Russian spy ring: The Clinton/Russia/Uranium scandal has all the ingredients of a juicy spy thriller, but so far the Big Three (ABC, NBC, CBS) networks have shied away from the key developments in the case:

On October 18, The Hill reported that a key FBI informant involved in the investigation of the Clinton/Russia/Uranium scandal was threatened by the Obama administration and warned not to publicly disclose details.

On October 22, The Hill’s John Solomon and Alison Spann reported the nugget that “A female Russian spy posing as an American accountant....used a false identity to burrow her way into the employ of a major Democratic donor in hopes of gaining intelligence on Hillary Clinton’s department.”

Not only were these tantalizing wrinkles in the scandal blacked out network anchors, reporters and analysts seemed intent on knocking the entire story down, on the few occasions they bothered to mention it. On the October 29 edition of ABC’s This Week, political analyst Matthew Dowd noted the “uranium deal, whole story...has been debunked...all along the way.” CBS’s Face the Nation, on October 29, invited on the Washington Post’s Ruth Marcus to call the Trump’s call to look into the uranium scandal part of a “absolutely frantic effort to distract attention” from accusations of Trump-Russia collusion.

When MSNBC brought up the uranium scandal it was usually to dismiss the case as old news. For example, on October 19, MSNBC’s Brian Williams finally mentioned the words “Russia,” “uranium” and “Clinton” in the same segment BUT it was only to dismiss President Donald Trump’s criticism of the media’s failure to cover this week’s new revelations in the growing scandal.

Williams began his segment on The llth Hour program, by playing a clip of the President’s blast against the liberal media and then recited a Trump tweet: “Uranium deal to Russia, with Clinton help and Obama Administration knowledge, is the biggest story that Fake Media doesn’t want to follow.”

However, instead of telling his viewers about the important news from that week (like the fact that an FBI informant was threatened by the Obama administration), he brought on McClatchy White House correspondent Anita Kumar to dismiss the story as old news that they’ve already covered.

After Williams asked Kumar to “explain to our viewers why they’re gonna hear more on this Russia – this uranium scandal.” Kumar responded: “I have to say that he is wrong about one thing. We covered a lot about uranium during the campaign. This is a deal that took place during the Obama administration when Secretary Clinton was Secretary of State and the administration approved of it. But what he has forgotten is that we wrote tons of stories about this when she was a candidate for president. She is not president. So, things aren’t – you know –  they’re not being covered as heavily any more.”

Kumar added “We are gonna hear about it because Chuck Grassley, the chairman of the Senate judiciary committee says he wants to look into this issue because a newspaper, The Hill, wrote about issues with that deal many years ago. They wrote about how there were all sorts of kickbacks and bribery and that sort of thing.”

That’s it. Just a vague reference to “kickbacks and bribery.”

Repeatedly, one CNN host and correspondent after another shot down the uranium scandal developments.

CNN anchor Don Lemon, on the October 24 CNN Tonight, dismissed the new uranium scandal developments as a “shiny object” meant to distract as seen in this exchange:

DON LEMON: Do you think this is a shiny object that they're trying to divert attention away from the Russia investigation into possible collusion or interfering in the election?

CORRESPONDENT BRIAN FALLON: Totally, Don. I think it’s of a piece with other moves that you saw congressional Republicans undertake today. Reopening an investigation into a seven-year-old deal that sold uranium in the Russian government in 2010.

On the October 25 edition of Anderson Cooper 360, CNN’s Tom Foreman offered a report on the Clinton-Russia-uranium scandal, and then Cooper turned to the pundits for analysis – or, as you might expect, for two Clinton defenders to dismiss it all as irrelevant old news. Foreman cited the new investigative reporting in The Hill newspaper, and Bloomberg’s Joshua Green just pretended it was never published: “This is all old news. I actually wrote about the story and how it came to be in my book published three, four months ago. I mean, all of this stuff came out years ago.”

On the October 27 edition of The Situation Room, anchor Wolf Blitzer and White House correspondent Jim Acosta also batted down the uranium scandal:

WOLF BLITZER: But let’s begin with apparent moves to discredit the entire Russia investigation. Up first, our senior White House correspondent Jim Acosta. Jim, seems like the White House is deploying a smoke screen of distractions.

JIM ACOSTA: It may be a Moscow misdirection, Wolf. The White House now appears to be putting its full weight behind an effort to investigate Hillary Clinton for any possible role in a uranium business deal involving the Russians that happened during the Obama administration. The president is accusing Hillary Clinton of collusion with the Russians without any evidence.

And on the October 29 edition of CNN’s Reliable Sources, the host Brian Stelter managed to attack The Hill and Fox News as he huffed: “Defending President Trump can be hard to do. So, some of his allies in the media don’t even bother to try. Instead they change the subject. This is a campaign of confusion....Here is how the campaign of confusion works. First, The Hill newspaper revived a relatively old story about Russian efforts to gain influence in the American uranium industry during the Obama administration. Fox became fixated on this story and the messaging was clear, the Russian investigations were recast as a scandal for Clinton and the Dems.”

So far, PBS NewsHour has talked about the latest uranium allegations on JUST two of their programs. On the October 30 edition of PBS’s NewsHour correspondent William Brangham ran interference for Hillary Clinton:

WILLIAM BRANGHAM: So, let’s break this down. First, Secretary Clinton didn’t have the authority to approve the deal. Several different U.S. agencies had to sign off on the deal, all of which did. There is no evidence that Clinton was informed or involved in the sale at all.Second, the uranium never left the country. It’s not legal to export uranium produced in U.S. mines. The Clinton Foundation did receive $145 million in contributions from individuals connected to Uranium One, beginning at least a year before the sale. And, in 2010, the year of the sale, former President Bill Clinton received $500,000 from a Russian bank for a speech he gave in Moscow. For now, those all have been deemed legal transactions. But, still, today, Mr. Trump once again stoked these stories on Twitter.

Then on November1 Chris Buskirk, the editor of American Greatness, managed to get in a quick reference: “I think that a lot of attention needs to be paid to Robert Mueller and to Rod Rosenstein, for that matter, too. I mean these are two people who I think the more we dig into their records, particularly when you look at something like Uranium One, they’re deeply compromised.”

For more on MRC’s coverage of the Clinton/Uranium/Russia scandal please visit the following blogs:

Brian Williams Finally Mentions Clinton/Russia/Uranium Scandal, Only To Dismiss It