On Wednesday, The Hill reported that a key FBI informant involved in the investigation of the Clinton/Russia/Uranium scandal was threatened by the Obama administration and warned not to publicly disclose details. Also, at a Senate hearing that same day, Attorney General Jeff Sessions promised that the Justice Department would take “appropriate action” in response to the new information.

So how much time have the Big Three (ABC, CBS, NBC) networks devoted to the growing story this week? As of Thursday morning, a grand total of ZERO seconds.

The complete network blackout even drew the attention of President Trump, who on Thursday tweeted: “Uranium deal to Russia, with Clinton help and Obama Administration knowledge, is the biggest story that Fake Media doesn't want to follow!” 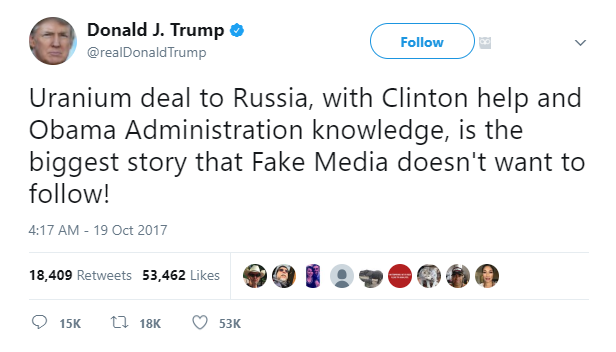 According to the October 18 story by John Solomon and Alison Spann: “An American businessman who worked for years undercover as an FBI confidential witness was blocked by the Obama Justice Department from telling Congress about conversations and transactions he witnessed related to the Russian nuclear industry’s efforts to win favor with Bill and Hillary Clinton and influence Obama administration.”

The businessman’s attorney, Victoria Toensing, revealed that when he tried to bring the story to light, via a 2016 lawsuit, “the Obama Justice Department threatened him with loss of freedom. They said they would bring a criminal case against him for violating an NDA.”

The scandal has been covered extensively on Fox News. Host Tucker Carlson opened his October 18 show with the latest revelations:

HOST TUCKER CARLSON: “We have spent nearly a year looking for a Russian scandal. For months it’s been basically the only thing anyone in Washington talked about. Many people were certain it would end in impeachment and prison terms....Well, it’s finally happened, we have a Russian scandal, but instead approving collusion between the Trump campaign and the government of Vladimir Putin, this one reveals deep wrongdoing in the Obama administration, and it’s real. We’ve known for several years that Russian money was flowing to the Clinton family and the foundations during the exact same period the Obama administration approved the Russian acquisition of 20 percent of this country’s strategic uranium reserves.

But now new reporting from The Hill newspaper reveals that as early as 2009, the FBI was investigating secret Russian efforts to get the deal done by bribing Americans. And yet, somehow the public, and even key officials whenever told about that investigation, as they made the decision to allow the deal to go forward. At least one American businessman says he directly witnessed Russian efforts to convince the Clintons to approve that deal.

The businessman says he was blocked from publicly telling Congress what he knew because he was ordered to remain silent by Eric Holder’s Justice Department. It’s a remarkable story and potentially a very significant one. Peter Schweizer originally broke this story in a book called  Clinton Cash,  he’s been covering it ever since and he joins us now. Peter, thanks for coming on.

AUTHOR PETER SCHWEIZER: Tucker, thanks for having me.

CARLSON: So, this is a kind of confusing cover to the story. The person who apparently has first-hand evidence that the Russian government tried to get the Clintons to support the deal has been prevented from speaking even to Congress, how can that be and what’s the justification for that?

SCHWEIZER: Well, that’s a great question, Tucker. What we know, apparently based on the reporting is that he has been put under a gag order by the Department of Justice and has been told that if he speaks about this publicly, not only will he face financial penalties in the form of a fine, that he could actually go to jail, that his liberty would be at risk, which is mystifying to me. I mean, why do we not want to know the details about this? That's what’s so troubling, is it reeks of cover-up. It just stinks. There’s no other word for it.

CARLSON: As a legal matter, how can the Justice Department from a previous administration told the Congress of the United States, elected officials that they can't talk to an American citizen about allegations of bribery that put our national security at risk? How does that work?

SCHWEIZER: Well, it really shouldn’t work and can’t work and what I mean is the Department of Justice today under President Trump, Attorney General Sessions, could tomorrow come back and say we are removing this gag order, that we believe that there’s a compelling national interest to know. We want this individual to testify before Congress. We want the public to know exactly what went on. So, this is not something that’s unbreakable, but it just simply takes a request from the Department of Justice to remove that gag order. If that gag order is not removed, I think it’s doubtful this businessman will want to go public, because he doesn’t want to be put in legal jeopardy.