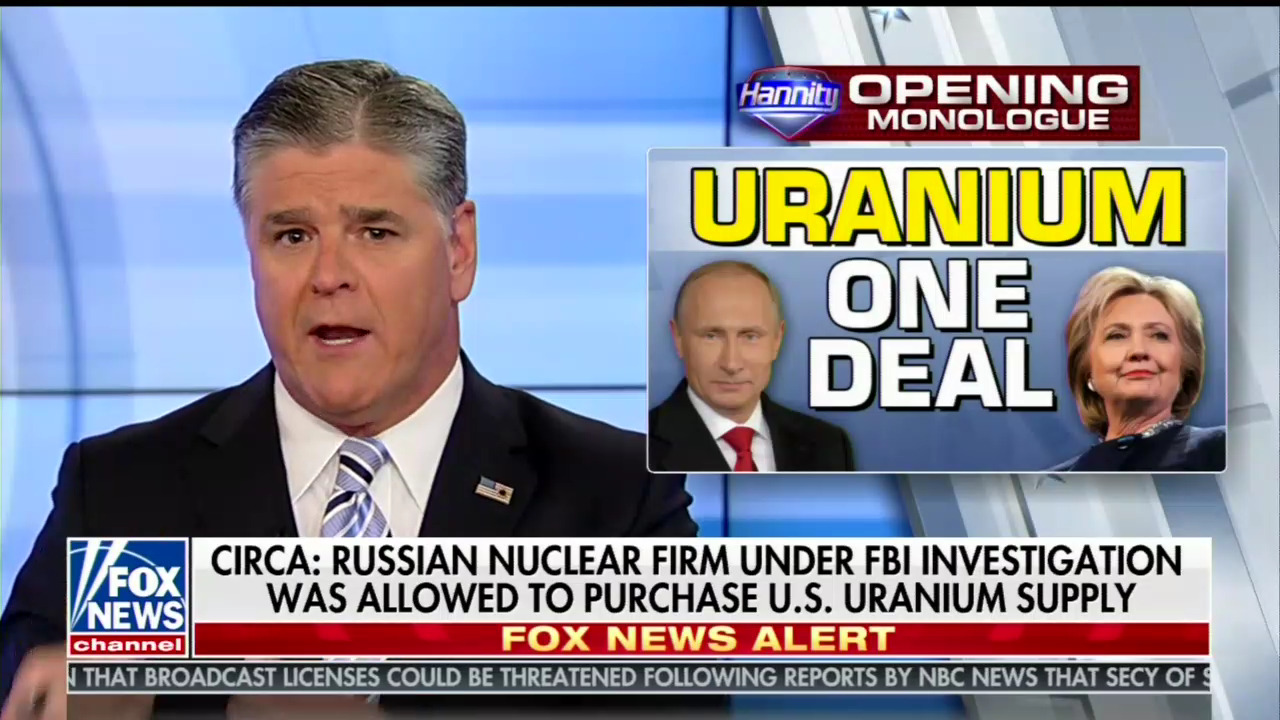 New revelations that the FBI uncovered a Russian bribery plot before the Obama administration approved a nuclear deal with Moscow, that involved millions of kickback money to the Clinton Foundation, have been utterly ignored by the Big Three (ABC, CBS, NBC) network evening or morning shows, since the story broke early Tuesday.

In fact, the network evening shows have only spent only 3 minutes and 1 second on the Clinton Foundation scandal in more than two years.

The latest developments in the Russia/Uranium/Clinton scandal were first reported, on Tuesday, by The Hill’s John Solomon and Alison Spann. On Tuesday’s edition of FNC’s Hannity, Solomon and Circa News’s Sara Carter were invited on to lay out the latest details of this scandal, that the Big Three networks, so far, have refused to report on.

The following are the relevant excerpts from the October 17 edition of FNC’s Hannity:

HOST SEAN HANNITY: According to new reports tonight from The Hill’s John Solomon and Circa News’ Sara Carter, there are brand-new FBI documents that show the Russian nuclear industry officials kicked back millions and millions of dollars to the Clinton Foundation all while Hillary Clinton was Secretary of State and helped approve the uranium one deal which gave Moscow, Russia, Vladimir Putin control of 20 percent of American uranium, the foundational materials for nuclear weapons.

And tonight, they are also reporting the FBI now has evidence that Russia for years has been doing this and they are reporting the FBI has evidence that literally they used bribery to gain control over America’s uranium industry. All while the Obama administration did nothing. And the Clinton’s benefited to the tune of nearly $145 million. You want a real Russia collusion story? We’ve got it.
...
HANNITY: Joining us exclusively, John Solomon, he is with The Hill. Sara Carter, Circa News.
Sara, let me start with you. We are talking about bribery, we are talking about blackmail. We are talking about what else that was going on that the Obama Justice Department knew and still gave Putin, Moscow, Russia 20 percent of our uranium and the money goes to the Clinton Foundation. Let’s talk about it.

SARA CARTER, CIRCA NEWS: Well, back in 2009, the FBI was actually approached by a businessman. By an American businessman who said, look, I have information on the Russians. And I am going to give this to you and they said, would you work with us? They came to an agreement. He went inside. For 15 months, Sean, for 15 months, the FBI was investigating the Russian nuclear industry and agency. They knew that there were kickbacks.

They knew that there were bribes and they knew how dangerous this was to national security. And 15 months had passed in the investigation and then CFIUS, 13 members of the governing board approved the Uranium One deal to the Russians. I mean, this was something that I contacted FBI officials tonight. FBI sources that were there during that time. And they said the FBI would have had all of this information.

It would have been their duty on the board, on the CFIUS board to report that information. And so, now what I’m thinking is, if they did report that information, it’s got to be out there. We’ve got to be able to FOIA it. We’ve got to be able to see these documents. And know what was going on and why the United States government decided to approve a deal that would give 20 percent of U.S. uranium assets to Vladimir Putin. There is the connection with Russia.

HANNITY: Let me go to you, John, and you’re a reporter of The Hill. So, the FBI basically has evidence and the former documents’ e-mails financial records and eyewitnesses proving the Russian’s bribery, kickbacks, extortion and money laundering to secure their Uranium One deal – and about $145 million kicked back to the Clinton Foundation and they knew it in 2009? They knew it before they even approved the deal?

JOHN SOLOMON, THE HILL: Yeah. You said in your opening monologue that the Democrats are concerned. That Russians tampered with our election results in 2016. Well, six years before that, they tampered with our nuclear security. The case proved that the nuclear Russia, Russia’s nuclear industry had bribed their way and compromised the American truck company that moved all of Russia’s uranium in the United States.

That’s a national security threat. And for two years, the Obama administration and Hillary Clinton and everybody who has been quoted that said, the Obama administration had no knowledge of a national security threat and that’s why they did not have any problem approving the Uranium One deal. Well, guess what? Tonight, we have a real National Security threat that was proven in real time in 2009 and it’s going to be interesting to see what Congress does tomorrow morning. Chuck Grassley has a hearing with Jeff Sessions on the seat. And I think you might see some interesting questions.