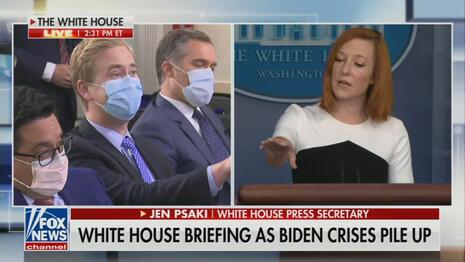 Following four years of combative White House press briefings and showboaters like Jim Acosta and April Ryan becoming Resistance household names, the White House Briefing Room saw a different show in 2021 with Press Secretary Jen Psaki. All told, there were softballs, tough questions, and plenty of boring and inoffensive questions on The Psaki Show. But often times, one could count on one man to do what Acosta refused to do in respectfully challenging an administration: Fox’s Peter Doocy.

Day after day, Doocy and a few other reporters (including New York Post’s Steven Nelson, Daily Caller’s Shelby Talcott, Real Clear Politics’s Philip Wegmann, and Doocy’s wife, Hillary Vaughn of Fox Business) arrived with cordial yet probing questions. If only there was more of that in the Trump briefings.

To mark the end of 2021, NewsBusters took a look at the 100-plus blogs filed under our “White House Press Briefing” tag and found the top 20 moments between Doocy and Psaki.

Below, you’ll find that countdown, presented in chronological order with a link to its original NewsBusters blog.

Our first entry came just under three weeks into the administration in which Doocy repeatedly inquired with Psaki about “when” and “where” fossil fuel workers “can go for their green jobs” with the White House’s green ambitions growing running in conflict to their employment and livelihood.

Amid the first signs of a Biden border crisis, it was revealed that illegal immigrants were indeed being housed in similar conditions to what was roundly derided by Trump critics during his term, but this White House maintained it was treating people with respect.

It was on this theme that Doocy brought a scorcher to the Q&A:

The border crisis continued to rage into March and Doocy spent this Psaki Show wondering aloud whether the administration has “a messaging problem” and why did they allow detention centers to be packed to the brim while many schools stayed closed through much of the school year.

When Psaki scoffed at Doocy’s question about whether “the Border Patrol unions and the HHS unions been easier to work with than the teachers' unions,” the Fox reporter’s face became red as he hit back: “It’s not funny.”

As he did throughout the year, Doocy arrived the next day and emphasized the double standard on Covid requirements between international air travelers versus illegal immigrations crossing the southern border.

Psaki tried to wiggle out by pinning some of the blame on Governor Greg Abbott (R-TX), but Doocy wasn’t having it.

Skipping ahead to Briefing Room fireworks from the summer months (pun intended), Doocy battled Psaki for the second time over her gaslighting that Republicans are the Defund the Police party when he wanted her to name names of Republicans who “said they did not like the American Rescue Plan because they wanted to defund the police.”

While Psaki doubled down, Doocy spoke in facts, citing reasons Republicans gave for opposing the legislative boondoggle that was spun as solely about Covid relief as well as the fact that numerous House Democrats support defunding the police.

The debate continued into this installment of the briefing over the push to defund the police, but this Doocy vs. Psaki duel also took on a tone-deaf White House tweet celebrating a 16-cent drop in the cost of food for a Fourth of July barbeque.

During one of the rare briefings when reporters didn’t have to wear masks, Doocy pressed Psaki on the deadbeat Texas state House Democrats through the lens of whether Biden ever “hopped on a train and left to avoid a vote that…he was going to lose” as well as the administration’s initial refusal to cite communism as the main reason for massive protests that swept across Cuba.

Doocy also grilled Psaki on this the next day, but it was to no avail.

Back in July, the administration reminded Americans of the left’s coziness with Big Tech when it discussed cracking down on what it deemed Covid misinformation, so it fell to Doocy (and Wegmann) to irk Psaki with important questions about whether the White House is “spying on people’s Facebook profiles.”

This late July briefing marked one of the handful of occasions in which Doocy was but one of many reporters doing their jobs in pressing the administration for answers as it dealt with the federal government announcing Americans should return to masking up.

Doocy was joined in the tough questions by reporters from outlets like ABC, the Associated Press, CBS, NBC, Reuters, and The Wall Street Journal, but for his turn, the Fox reporter pointed out how a new obsession with masking could decrease public confidence in the coronavirus vaccines.

When the impending start of a new school year triggered another liberal media onslaught against Governor Ron DeSantis (R-FL) for calling citizens to live their lives, Doocy’s relentless questioning about masks and school Covid policies resulted in a massive own goal as Psaki conceded parents should shut up and let public officials dictate what happens in schools.

For a left that spent much of 2020 feigning outrage over Operation Warp Speed and questioning whether the Covid vaccines would be safe, the tables turned once they returned to power in 2021, but Doocy did his best to not let them get away with it as he questioned Psaki during this briefing about Biden’s own comments denouncing the shots before Election Day.

The Afghanistan debacle provided a few weeks of what felt like an out-of-body experience as the liberal media largely came together to call out the horrific nature of the U.S. withdrawal from the country following 20 years of war. During one of the briefings, Doocy infuriated Psaki by describing Americans in the country as having been “stranded” and wondering how the withdrawal helps Biden’s upbeat proclamation that “American is back” as a true global leader.

The next day, the rhetorical beatings continued as he wondered whether the Taliban has more control over the U.S. military’s own movements than President Biden.

Doocy returned following a break and just over a week after the August 31 U.S. deadline to withdrawal from Afghanistan with questions about the U.S.’s failure in leaving Americans behind under Taliban rule.

Along with that topic, Doocy had this zinger: “There are now more terrorists wanted by the FBI in the new Afghan government than there are women. Does the President think that is a foreign policy success?”

Another border surge reared its head in the late summer/early fall and, with Fox’s Bill Melugin doing yeoman’s work on the ground, Doocy was there in the Briefing Room to hold the administration to account.

Doocy had one of his strongest moments of the year when he had a truly epic exchange with Psaki over whether Biden has ever been to the southern border in his entire life.

Despite Psaki’s spin, the answer was no and Doocy spent numerous briefings continuing to hammer this point.

Remaining laser focused on the border crisis, Doocy persisted with questions about the status of all 15,000 illegal immigrants under a Del Rio, Texas bridge and how the administration’s “helping” to “stop the spread” of Covid even though thousands of illegal immigrants were bused throughout the southwestern U.S. that would allow them to then fan out across the country when the only ones tested were those “show[ing] symptoms.”

It was a true tour de force on this fall afternoon as Doocy fit in three huge topics, including the possibility that vaccine mandates don’t actually “make people safer” if droves of firemen, police officers and troops are let go for failing to comply with requirements to take the Covid vaccines.

Following an exchange with Fauci about the lack of Covid testing at the border, Doocy had a blunt question many Americans have likely been wondering: “What ever happened to President Biden’s promise to shut down the virus?”

Doocy had a second scorcher when he asked:

[A] lot of talk about the first Trump-Biden debate, but at the second one, in 2020, when roughly 220,000 Americans had already died of Covid, Joe Biden said about Trump: “Anyone who is responsible for that many deaths should not remain as President of the United States of America.” Is that still the standard now that more Americans have died under President Biden then President Trump?

Omicron dominated briefings throughout December, but Doocy made sure to fit in a few other questions as, during this briefing, he honed in on the staff turnover with Vice President Kamala Harris with one ponderance being whether Harris hasn’t been “satisfied with the staffing that she has had…or do people just not want to work for her anymore.”

And on crime, Doocy highlighted the rise in robberies and demanded to know what Biden was “going to do about all this lawlessness.” It was here (and in other briefings) that Psaki pinned the blame on Covid. A few weeks later, it’s still mind boggling.

Staying on rising crime, Doocy presented to Psaki the factor district attorney’s play in curbing unrest and specifically whether the “increase in criminal activity” has been due to “some prosecutors” being “too soft on crime.”

With the Soros-backed DA’s all being Democrats, Psaki chose to tread carefully and talk about what the White House could do in terms of funding police departments.

In the final briefing of 2021, Doocy called out Biden’s false claims about “nobody” having foreseen the rise of the omicron variant, why the administration has promised hundreds of millions of free Covid tests next month if the federal contract hasn’t even been finalized, if those behind healthcare.gov would be behind the testing site, and then two questions about crime following the carjacking of Congresswoman Mary Gay Scanlon (D-PA) in South Philadelphia.