The Washington Examiner’s T. Becket Adams exposed on Tuesday morning in a series of tweets the very problem that besets a liberal media obsessed with placing legitimate conservative sites into the sphere of the fake news when a number of journalists chided Speaker of the House Paul Ryan for comments at CPAC 2014 regarding school lunches thanks to a dishonest hatchet job by Time magazine.

Along with a series of screencaps from journalists tweeting about Ryan, Adams succinctly pointed out that “[i]f you want to stop fake news from influencing voters who've stopped relying on media brand names, work to restore trust” and “[t]hink first.”

The article in question from Eliana Dockterman on March 6, 2014 sought to slam Ryan with a headline entitled “Paul Ryan Says Free School Lunches Give Kids ‘An Empty Soul’” without any sort of broader context besides a small section of an anecdote he told to the audience in National Harbor, MD.

While talking about the problem of “not enough people” being able to “find work” and thus leaving the workforce, he had this to say about what liberals have been constantly offering the American people instead of a climate where they can find jobs and flourish:

I don't think the problem is too many people are working. I think the problem is not enough people can find work and if people leave the workforce, our economy will shrink here and there will be less opportunity, not more. The left is making a big mistake here. What they are offering people is a full stomach and an empty soul. The American people want more than that.

As for the anecdote that Time botched, here’s the complete transcript of what Ryan said [emphasis mine]:

This reminds me of a story I heard from Eloise Anderson. She serves in the cabinet of my buddy Governor Scott Walker. She once met a young boy from a very poor family and everyday at school he would get a free lunch from a government program. He told Eloise he didn't want a free lunch. He wanted his own lunch. One in a brown paper bag just like the other kids. He wanted one, he said, he can see new a kid with a brown paper bag had someone who cared for him. This is what the left does not understand. We don't want people to leave the workforce. We want them to share their skills and their talents with the rest of us. People don't just want a life of comfort. They want a life of dignity. They want a life of self determination.

Instead, as per Dockterman’s title, Ryan addressed a conservative audience and sinisterly trashed children on free or reduced school lunches as not having a soul.

With Republicans set to control not only Congress but the White House in January, journalists such as Huffington Post’s Peter Coffin, BBC’s Tim Maughan, The Washington Post’s Gene Weingarten, and Chicago Tribune freelancers Matt Lindner and Peter Nickeas all willingly fell into the trap on Tuesday of criticizing Ryan using the Time piece.

“Paul Ryan says free school lunches give kids “an empty soul.” Did not disclose if anything is in his own soul,” Weingarten tweeted while Coffin suggested in one of his own that he presumes Ryan has “never had free lunch” himself.

If those two examples weren’t enough, music writer Corbin Reiff (whose work has appeared in Rolling Stone and The Washington Post) sank even lower with this pathetic tweet: 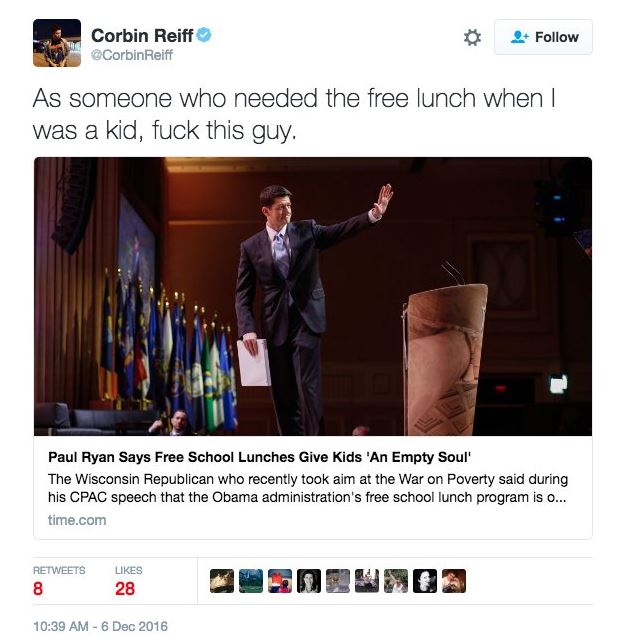 Adams also correctly opined in another tweet about this matter that despite instances like this, the liberal media and their supporters “wonder why an increasing number of voters are relying on alternative sources for news information.”

In showcasing the tweets of the writers mentioned above, Adams observed: 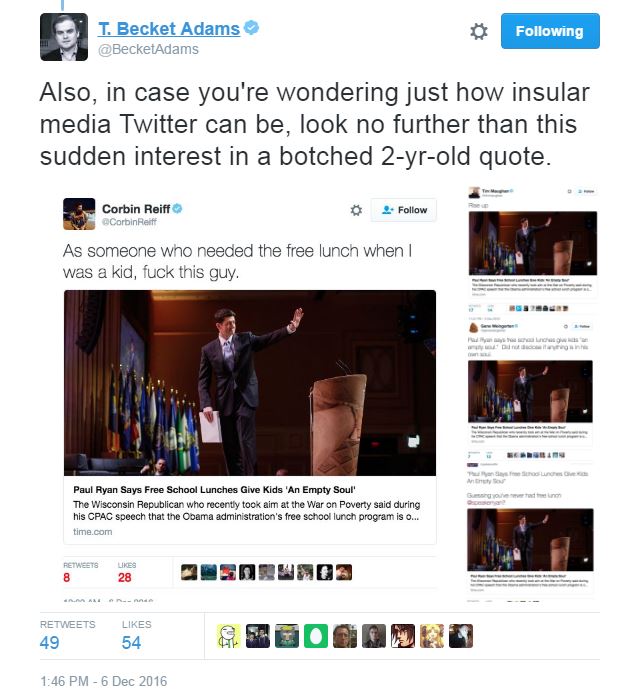