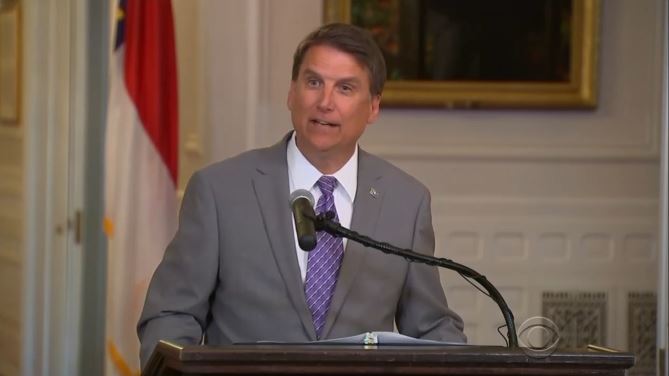 In a column that showcases the leftist belief that the ends justify the means, the Charlotte Observer and its parent company McClatchy have expressed nothing short of support for the economic boycotts of North Carolina in light of Republicans remaining defiant after Governor Pat McCrory signed a bathroom bill to ensure that people use the bathroom according to the gender they were born with.

The state’s largest newspaper penned its lead editorial on Tuesday slamming McCrory’s defense of the law as “distributing” and showing an intent toward “prolonging” the “pain” of transgender people who either identify as a gender other than who they were born as or are unsure of their gender all together.

It began by summarizing the corresponding lawsuits filed by North Carolina and President Obama’s Department of Justice before mounting their liberally moral high horse to attack McCrory: “That’s a rationale, legal and otherwise, that was used against gays and lesbians during their fight for equality. It’s no less disturbing now – and no more valid.”

Seeking to move the window of debate to what fits their standards, the paper tried to flaunt science as being in their favor:

Scientists and physicians disagree, including 20 pediatric endocrinologists from across North Carolina who wrote to McCrory last month urging him to consider the science behind gender assignment.

“There are babies born in whom chromosomes suggesting one sex do not match the appearance of the genitalia,” the doctors wrote, adding: “Our patients already face major medical and social challenges, and HB 2 creates unnecessary hardship.”

On Monday, the governor insisted on prolonging that pain, and in doing so, he also continues to jeopardize billions in federal funding for North Carolina. McCrory, however, tried to frame his lawsuit as a public service of sorts, saying it was an attempt to clarify who gets protection from discrimination, and who gets to decide.

“It’s a rationale that denies not only identity, but dignity. It should be rejected by the courts, and by the people of North Carolina,” it concluded.

Rounding things out, Charlotte Observer assistant editorial page writer Peter St. Onge went as far as to advocate in an April 28 column that celebrities and music stars of all stripes should indeed cancel shows in their city and state because “it’s working” in forcing conservatives to bow down to the gay community.

St. Onge gloated that conservatives are “squirming” and “looking for a way out” since “businesses are unhappy....conventions are taking millions of dollars out of the state [and] big-name performers are canceling concerts.”

Admitting that many people in the state will suffer financially because of boycotts, he stated that “ultimately, if boycotts work, some larger positives eventually happen” because “LGBT people” will be shielded “from discrimination” to advance the long-term health of the state.

In his conclusion, he backtracked slightly in ruling that the NBA moving the 2017 All-Star Game from Charlotte doesn’t make him “gleeful” at all, but chalked it up to being for the greater good and have gay rights advanced compared to in, say, communist China:

But it makes at least some sense. The cynic would say that the NBA is thinking about its image more than the LGBT community of North Carolina, and that may be true. But the NBA also sees an opportunity to make a difference in North Carolina (unlike in, say, China, where a boycott really would accomplish nothing.)

Same for the performer who cancels a concert. It’s a protest that makes more of a statement than donating proceeds to LGBT causes. For some, it’s simply the right thing to do.