Network Evening Newscasts Paint Garland as ‘Moderate,’ Plead with Republicans to Consider Him

The “big three” networks of ABC, CBS, and NBC did their part on Thursday night to continue the standard set earlier in the day that President Barack Obama’s latest Supreme Court nominee Merrick Garland is nothing but a “moderate” and personally pleaded with Republicans to consider placing him on the Court.

While two networks mentioned comments made by current Vice President Joe Biden back in 1992 about Court appointments, none of them made light of the President’s support for a filibuster attempt in 2006 against then-Supreme Court nominee Samuel Alito.

The lone network dissident was CBS Evening News anchor Scott Pelley as he blew the cover of his cohorts by referring to Garland as “a liberal” who would, if confirmed, “replace the late conservative Justice Antonin Scalia.”

Chief legal correspondent Jan Crawford made sure to rectify this talking point in her report when she dubbed the Chief Judge of the D.C. Circuit Court of Appeals “a moderate liberal who builds consensus.”

In a segment about the confirmation battle between the President and Senate Republicans, State Department correspondent Margaret Brennan was the only network reporter to actually play a soundbite of then-Senator Joe Biden (D-Del.) in 1992 decrying any attempt by then-President George H.W. Bush to appoint anyone to the Supreme Court (which was only mentioned in passing on ABC’s World News Tonight).

However, Brennan quickly fell in line with Crawford by explaining how “the White House thinks the American public is on its side and hopes Garland's sterling legal credentials and moderate political record will persuade some Republicans.”

She later concluded her report with the political implications as being “a political gamble” where “Republicans want to appear strong but not obstructionist, which could ultimately backfire to the benefit of Democrats.” 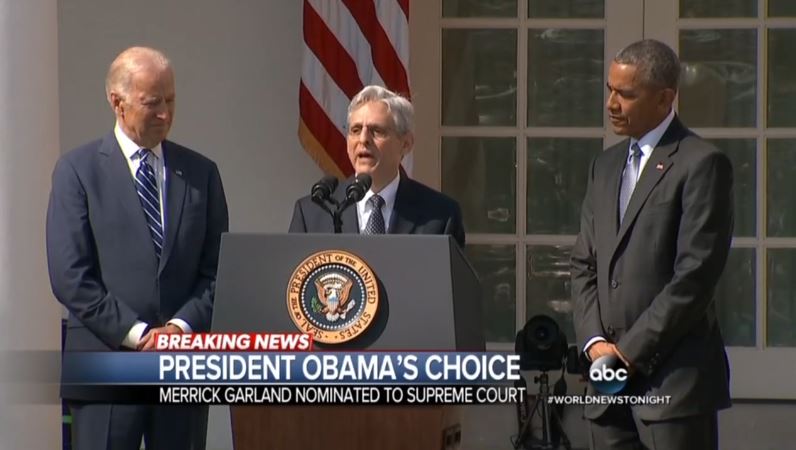 As for ABC’s World News Tonight, anchor David Muir touted the President’s line right off the top that his appointment of Garland was not political: “The President aware of this nation's divided politics, but warning to go down that path would be wrong.”

Longtime Supreme Court reporter and current chief foreign correspondent Terry Moran returned to the Court for Wednesday’s announcement and touted Garland as being “known as a moderate on the appeals court, though he would tip the balance of the Supreme Court by replacing staunch conservative Antonin Scalia.”

Rehashing what he had stated during the ABC News Special Report hours earlier, Moran predicted that the President may have dismayed liberals by not choosing a minority and/or someone farther to the left:

On his short list, he could have chosen a more strongly liberal candidate or a candidate offering diversity, to rally the Democrats to the cause, but in Merrick Garland, the President has chosen a nominee who has had support from both sides of the political aisle over the years who in any normal time would be confirmed. It's not a normal time.

Muir pivoted next to Capitol Hill correspondent Mary Bruce who spent Wednesday “getting answers” and “ask[ing] Republicans who say this will go no further, to ask why, and if they would reconsider.”

Along with Republican Senator John Cornyn (Tex.), Bruce reported that she “chased down the Republican leaders who are refusing to hold hearings or a vote, including Orrin Hatch who once praised Garland.” 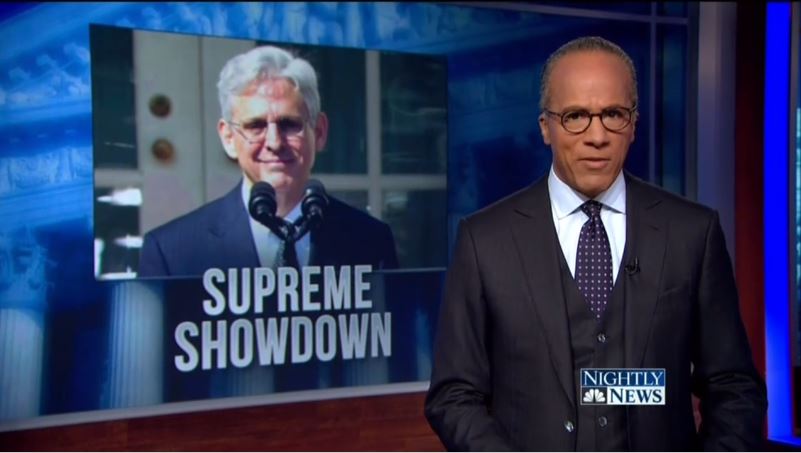 Going lastly to NBC Nightly News, anchor Lester Holt parroted the standard line that Garland has been “regarded as a moderate to replace the late conservative justice the late Antonin Scalia, but even as the President warned against politicizing the process, the Senate Majority Leader said there would be no action taken on the nomination.”

Justice correspondent Pete Williams was the only correspondent to actually allude to something about Garland’s record as jurist in noting that he’s “been a moderate” by “voting to uphold environmental laws but often tough on criminals.”

He then played a clip of SCOTUSblog publisher Tom Goldstein’s claims about Garland: “Ideologically, Merrick Garland is in the center, maybe a little bit to the left. He seems mostly to be a judicial craftsman. Figuring out what the law is, not what he might want the law to be.”

As my colleague Geoffrey Dickens thoroughly diagramed on Wednesday morning, liberal judicial appointees have always seemed to garner praise or a “moderate” label like the case is here but when it comes to conservative ones, the media have consistently found a way to dismiss them and immediately play up their right-leaning viewpoints.