After having spent seven and a half minutes on Tuesday trumpeting President Obama’s executive actions on gun control, CBS Evening News anchor Scott Pelley eventually turned his newscast to the 2016 election and invoked Ronald Reagan in lecturing Republicans that “he wouldn't recognize the melee just four weeks before Iowa.”

Pelley alluded to Reagan before turning over to chief White House correspondent Major Garrett on the campaign trail in New Hampshire: “In the race for the next commander in chief, Ronald Reagan once said the 11th Commandment is thou shall not speak ill of another Republican. Well, he wouldn't recognize the melee just four weeks before Iowa.”

Even though the graphic next to Pelley showed only one Republican and two Democrats during his mini-lecture (Donald Trump plus Hillary Clinton and Bernie Sanders), Garrett went onto harp on the SuperPACs aligned with various GOP candidates and how many have released ads attacking fellow candidates on the GOP side on issues ranging from foreign policy to Medicaid expansion.

In contrast, CBS gave only 34 seconds for socialist Bernie Sanders giving a speech in New York where he firmly denounced Democratic opponent Hillary Clinton for being too cozy with Wall Street.

While he passed off advice to Republicans about what Reagan would and would not approve of today, Pelley simply stated that “Sanders took aim today at frontrunner Hillary Clinton over her ties to Wall Street” as he “also vowed to break up the country's biggest financial firms.”

ABC’s World News Tonight also stayed clear of insinuating any proverbial food fight in the Democratic Party during its full segment on Sanders’s big speech. Anchor David Muir led into Democratic campaign correspondent Cecilia Vega by touting the fact that she spoke with Sanders after his speech “as a crowd of his supporters grew right behind them.”

Vega began her airtime by first alluding to Hillary Clinton and how she’s “now enlisting the big dog of Democratic politics, her most powerful weapon, on the campaign trail, but there is one man standing in their way.”

Referring to Sanders, Vega gushed that the candidate who’s “drawing those massive crowds” and scores of donors and referred to her time with Sanders afterward as containing a “mob of supporters there every step of the way.”

Moments later, Vega described Sanders’s answer on how he would actually break up the so-called big banks as another case of “blunt talk” that’s become “a Sanders trademark.”

The transcript of the segment from the CBS Evening News with Scott Pelley on January 5 can be found below. 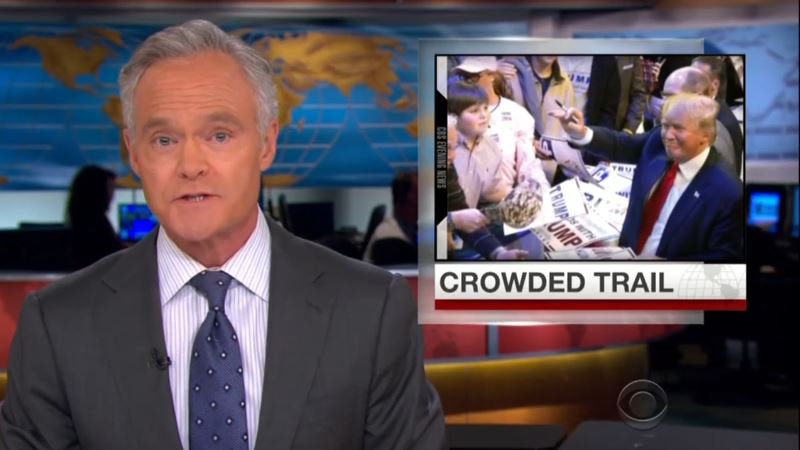 SCOTT PELLEY: In the race for the next commander in chief, Ronald Reagan once said the 11th Commandment is thou shall not speak ill of another Republican. Well, he wouldn't recognize the melee just four weeks before Iowa. Here's Major Garrett.

REPUBLICAN SENATOR MARCO RUBIO (Fl.) [in Ted Cruz SuperPAC ad]: I know I have a debate but I gotta get this fantasy football thing right?

GARRETT: Cruz took his own fire from Rick Santorum, who riddiculed Cruz’s pension for Senate filibusters.

NARRATOR OF RICK SANTORUM AD: You want someone to read one hell of a bedtime story? Ted Cruz is your guy. If you want to protect America and defeat ISIS, Rick Santorum's your president.

GARRETT: Rubio and Cruz sell themselves as positive candidates who don't attack their opponents, leaving that job to their million-dollar SuperPACs.

NARRATOR IN CRUZ SUPERPAC AD: Keep the Promise is responsible for the content of this advertising.

GARRETT: The SuperPACs are supposed to operate independently from the campaigns, although Rubio today said he does support his group's message.

RUBIO: These are serious policies, so there's nothing in those ads that are inaccurate.

GARRETT: Christie told The Washington Post today that Rubio cannot “slime his way to the White House.” Scott, that those attacks came from a Rubio SuperPAC and not Rubio himself was a distinction apparently lost on Christie as it may very well be for voters.

PELLEY: Major Garrett on the muddy campaign trail. Major, thanks very much.