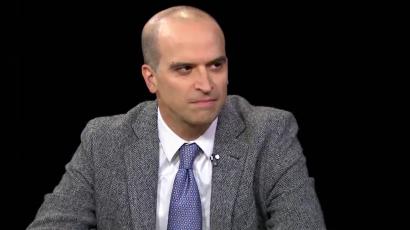 Former New York Times Washington bureau chief and now-columnist David Leonhardt has found the problem with the press -- they’re just too middle of the road. The headline was “What About Centrist Bias?”

The subject line to Monday’s e-mail newsletter questioned the existence of “Liberal bias?” The online headline made it clearer: “How ‘Centrist Bias’ Hurts Sanders and Warren -- The media has a bigger problem than liberal bias.” He used a November column by Politico editor John F. Harris as a jumping-off point.

...As he explained, “This bias is marked by an instinctual suspicion of anything suggesting ideological zealotry, an admiration for difference-splitting, a conviction that politics should be a tidier and more rational process than it usually is.”

The bias caused much of the media to underestimate Ronald Reagan in 1980 and Donald Trump in 2016. It also helps explain the negative tone running through a lot of the coverage of Elizabeth Warren and Bernie Sanders this year.

Admittedly, Sanders was roughed up by the Times when he stood in Hillary Clinton’s way in 2016. But one would have to look hard to find “negative” Warren coverage there.

This paragraph offered a laugh line:

Centrist bias, as I see it, confuses the idea of centrism (which is very much an ideology) with objectivity and fairness. It’s an understandable confusion, because American politics is dominated by the two major parties, one on the left and one on the right. And the overwhelming majority of journalists at so-called mainstream outlets -- national magazines, newspapers, public radio, the non-Fox television networks -- really are doing their best to treat both parties fairly.

....The skeptical questions posed to the more moderate Democrats are frequently about style or tactics: Are you too old? Too young? Too rich? Too far behind in the polls?

Again, a casual perusal of the paper’s hostile coverage of alleged moderate Biden (before Trump went after Biden’s son Hunter) neutralizes Leonhardt’s argument. He makes an unconvincing stab at portraying himself as moderate, before suggesting the press should go easier on Sanders and Warren.

....Not every policy question posed to Democrats needs to have a conservative assumption, and not every question posed to Republicans needs to have a liberal one. If Warren and Sanders are going to be asked whether their solutions go too far, Joe Biden should be asked whether his solutions are too timid: Mr. Vice President, many economists believe that inequality is bad for an economy, so are you doing enough to attack inequality?

Is obsession with “economic inequality” a prime characteristic of a “centrist”?

The world is more surprising and complicated than centrist bias imagines it to be. Sometimes, people like Bernie Sanders and Elizabeth Warren are right. Even when they’re not, they deserve the same skepticism that other politicians do -- no less, no more.