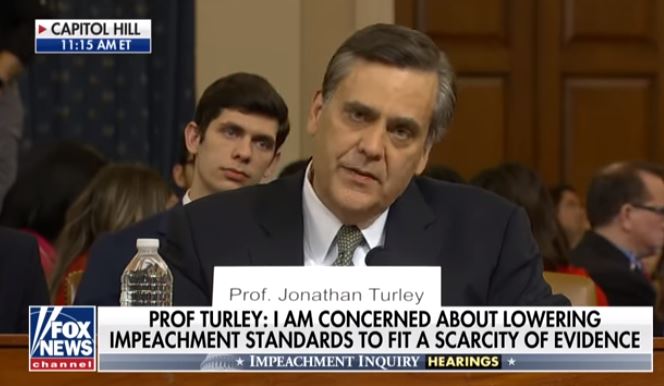 Yet, legal reporter Charlie Savage showed surprising hesitation on boarding the impeachment train, with a front page story suggesting law professor Jonathan Turley’s argument that the case for impeachment was currently not strong enough to carry: “An Argument for the Unheard Facts -- A G.O.P. Witness Bares Congress’s Dilemma: Should It Wait?”

The hidden bias was the partisan manner in which the main congressional players and witnesses were described by congressional reporter Sheryl Gay Stolberg and Supreme Court reporter Adam Liptak.

Liptak’s “A Divide Over Whether the Evidence Is There” profiled “Wednesday’s Witnesses,” the scholars and professors who provided testimony. They were identified thus: Noah Feldman, Law professor at Harvard; Michael Gerhardt, Law professor at North Carolina; Pamela Karlan, Director of Supreme Court Litigation Clinic at Stanford; Jonathan Turley, Law professor at George Washington.

Yet the description boxes accompanying those headlines highlighted the credentials of the Democratic witnesses but were reliatvely dismissive of the sole Republican witness, law professor Jonathan Turley. He has degrees from the University of Chicago and Northwestern University. Yet those weren’t listed in his description paragraph, while the others’ academic credentials were.

Feldman was “A graduate of Harvard and Yale Law School and a Rhodes Scholar....”

Gerhardt “...earned degrees from Yale University, the London School of Economics and the University of Chicago.”

Karlan “...received bachelor’s, master’s and law degrees from Yale...has a reputation as a scholar and Supreme Court advocate.”

Turley also has degrees from the University of Chicago, as well as Northwestern, but those weren't mentioned in his paragraph. He was reduced to “a well-known legal expert, often seen on cable news...” (His current affiliation as law professor at George Washington was in the heading, matching the pattern of the three Democratic witnesses.)

Stolberg’s rundown of the key players on the House Judiciary Committee also had a partisan breakdown. The Democrats on the committee came off far more flattering in Stolberg’s brief descriptions, while the Republicans were often portrayed as mired in unrelated controversy.

Jerrold Nadler, Democrat of New York and chairman of the committee

The son of a Jewish chicken farmer, Mr. Nadler has a long and not happy history with the president. The two fought bitterly in the 1980s over a real estate development Mr. Trump sought to build on the Upper West Side of Manhattan. Meticulous and thorough -- he is never seen without a stack of briefing papers.....

Fast-talking, ambitious and a fierce defender of the president in the Capitol and on Fox News, Mr. Collins, 53, has lately been in the news over a dispute between Mr. Trump and Gov. Brian Kemp of Georgia over who should fill the Senate seat being vacated by Senator Johnny Isakson, who is retiring early....

Americans who tuned into the recent Intelligence Committee impeachment hearings are already familiar with Mr. Jordan, another fierce Trump defender whose pugnacious manner and sartorial choices -- shirt and tie but never a jacket -- have drawn derision among liberals. A scrappy former wrestler and firebrand founder of the conservative House Freedom Caucus, Mr. Jordan, 55, is embroiled in controversy at home over allegations that as a young assistant wrestling coach at Ohio State University in the late 1980s and 1990s, he ignored reports that a doctor was sexually molesting team members.

....At 49, he is widely viewed as a rising star among the next generation of leaders....

Mr. Ratcliffe, who also holds a spot on the Intelligence Committee, was briefly Mr. Trump’s pick to succeed Dan Coats as the director of national intelligence after Mr. Coats announced his resignation in late July. But Mr. Trump abruptly dropped the plan after questions from both Democrats and Republicans about Mr. Ratcliffe’s qualifications and concerns over whether he had exaggerated his résumé. Even some Republicans said he was too partisan for the job.

Ms. Demings, 62, has an only-in-America story. She grew up poor in Florida, where her father worked in the orange groves and her mother was a housekeeper. She attended segregated schools and went on to become the first female chief of the Orlando Police Department, a position she held from 2007 until her retirement in 2011....