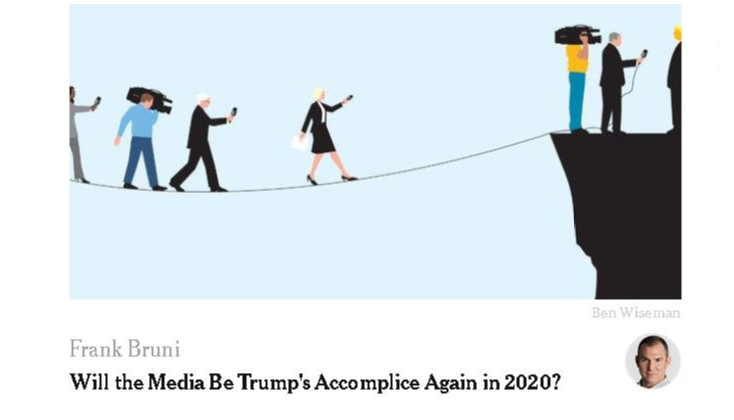 On the front of the New York Times Sunday Review, Frank Bruni warned his media colleagues not to fall for the old fairness ploy when it came to helping the Democrats defeat Donald Trump in 2020: “Will the Media Be Trump’s Accomplice Again” -- We have a second chance in 2020. Let’s not blow it.”

After noting Trump’s habit of nicknames, Bruni more or less argued (as his colleague Jim Rutenberg had done in August 2016 on the front page) that it was the mainstream media’s solemn duty to defeat Trump:

That’s a specific question but also an overarching one -- about the degree to which we’ll let him set the terms of the 2020 presidential campaign, about our appetite for antics versus substance, and about whether we’ll repeat the mistakes that we made in 2016 and continued to make during the first stages of his presidency. There were plenty.

We will wrestle with that repeatedly between now and November 2020, especially in the context of what may well be the most emotional and intense presidential race of our lifetimes. With the dawn of 2019 and the acceleration of potential Democratic candidates’ preparations for presidential bids, we have a chance to do things differently than we did the last time around -- to redeem ourselves.

On his quest to help the media reclaim its journalistic integrity, Bruni turned to a laughable source: Disgraced former CBS News anchor Dan Rather, who had to step down in disgrace after using forged documents to “prove” George W. Bush shirked his duties when he was in the Texas Air National Guard in the 1960s and 1970s.

Bruni admitted that the media covered Trump to the detriment of his rivals.

Why did Trump receive so much more coverage than the other presidential candidates, and why was his coverage positive in tone when the Republican race was still being contested and yet negative in tone after it had been decided?

Bruni warned his colleagues in the media about falling for that old “fairness” trap:

Regarding their fitness for office, [Clinton and Trump] were treated identically? In retrospect, that’s madness. It should have been in real time, too.

But we fell prey to a habit that can’t be repeated when we compare the new crop of Democratic challengers to Trump and to one another. We interpreted fairness as a similarly apportioned mix of complimentary and derogatory stories about each contender, no matter how different one contender’s qualifications, accomplishments and liabilities were from another’s. If we were going to pile on Trump, we had to pile on Clinton -- or, rather, keep piling on her.

He turned to the paper’s former executive editor, Jill Abramson.

“It was wall-to-wall emails,” said Jill Abramson, the former executive editor of The Times and the author of a book about the media, “Merchants of Truth,” that will be published next month. She was referring to the questions and complaints about Clinton’s use of a private email server as secretary of state. “When you compare that to the wrongdoing that has been exposed so far by Robert Mueller,” Abramson told me, “it seems like a small thing.” The considerable muck in Clinton’s background never did, and never could, match the mountain of muck in Trump’s.

His premise of the press being harder on Hillary isn't even vaild: The Media Research Center’s Rich Noyes ran the numbers from the 2016 campaign and concluded: “Hillary Clinton was not the media darling that Barack Obama was in 2008, but no reasonable person could suggest that political reporters created a landscape more favorable to Donald Trump than to her. And it’s just silly of her to say the news media, which detests Trump, was one of the causes of her defeat.”