Fox News media analyst Howard Kurtz reported Wednesday that former New York Times executive editor Jill Abramson offers an "extraordinary rebuke" of her former newspaper in a new book titled Merchants of Truth: The Business of News and the Fight for Facts, coming out on February 5. Abramson, who led the Times from 2011 to 2014, called out current executive editor Dean Baquet:

“Though Baquet said publicly he didn’t want the Times to be the opposition party, his news pages were unmistakably anti-Trump,” Abramson writes, adding that she believes the same is true of the Washington Post. “Some headlines contained raw opinion, as did some of the stories that were labeled as news analysis.”

What’s more, she says, citing legendary 20th century publisher Adolph Ochs, “the more anti-Trump the Times was perceived to be, the more it was mistrusted for being biased. Ochs’s vow to cover the news without fear or favor sounded like an impossible promise in such a polarized environment.”

Abramson describes a generational split at the Times, with younger staffers, many of them in digital jobs, favoring an unrestrained assault on the presidency. “The more ‘woke’ staff thought that urgent times called for urgent measures; the dangers of Trump’s presidency obviated the old standards,” she writes.

This might be seen as controversial, but it's also unmistakably true. 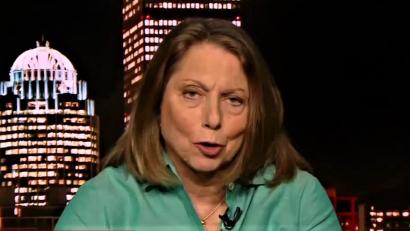 Abramson asserts this liberal tilt is good for business in the Trump era: “Given its mostly liberal audience, there was an implicit financial reward for the Times in running lots of Trump stories, almost all of them negative: they drove big traffic numbers and, despite the blip of cancellations after the election, inflated subscription orders to levels no one anticipated.”

For example, the most-read Times opinion article of the year was its scandalous Anonymous op-ed ripping the president from inside his administration.

These passages don't imply Abramson isn't a liberal, or can't praise the paper. Kurtz reports Abramson praised as “brave and right” Baquet’s decision to run this headline when Trump abandoned his birtherism attacks on Barack Obama: “Trump Gives Up a Lie But Refuses to Repent.”

Fox anchor Jon Scott mentioned to Kurtz on America's Newsroom that The Wall Street Journal editorial board recently criticized "The Constant Spin Zone" of the press, based on one of those Philip Rucker articles. They wrote: "These reporters can’t even begin a news account of a presidential visit to a military base without working in a compilation of Mr. Trump’s controversies, contradictions, and failings."

Kurtz elaborated that The Washington Post ran a lede about "President Trump "touching down in Iraq after announcing a victory over ISIS that his own Pentagon and State Department said remained incomplete. It's fine to point that out. [But] When you put it in the lede, it's kinda of like 'President Trump, under fire for being increasingly unhinged, said today....' You aren't giving the readers or viewers a first shot at what the president says. If you want to bring in context or quote critics, I think that's fine. When you do it in the very first sentence of the story -- and there's a lot of that going on -- it undermines our collective credibility."