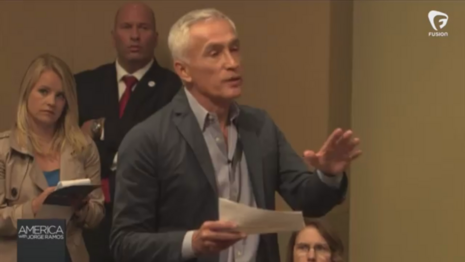 Once again, Ramos’ detached rantings are enabled by The New York Times. Ramos devotes roughly half of his column, titled “Trump’s Lesson for the Media”, to a revisionist recount of his staged confrontation of Trump. The other half is Ramos’ usual litany of grievances and baseless assertions.

The first two paragraphs and the close are enough of a read for those who are not gluttons for punishment:

MIAMI — I had the honor once of being kicked out of a Donald Trump news conference. I asked him a question he didn’t want to answer and a security guard threw me out. It happened on Aug. 25, 2015, in Dubuque, Iowa, during Mr. Trump’s first presidential campaign.

The news conference revealed with astonishing clarity who Mr. Trump really was: a dangerous populist, an anti-immigrant bully, and a threat to democracy and the free press.

Perhaps it was the pandemic that was most responsible for putting an end to Mr. Trump’s presidency. But the entire debacle might have been avoided if we had simply paid greater attention — and offered more resistance — to the words and gestures of the undeserving man who descended the golden escalator of Trump Tower in 2015.

One would think that Ramos’ brief detention by an actual South American strongman would be enough to dissuade him from the belief that Trump is a threat to the free press. As media types are fond of saying, Ramos continues to make this claim without evidence. He remains free to roam about the country (and beyond), and criticize Trump on his way to collect media accolades. Furthermore, Univision hasn’t been seized.

Interestingly enough, Ramos did bite his tongue when an American president literally persecuted journalists, except to tweet out “bad week for the White House”. Of course, we're talking God-King and Giver of DACA Barack Obama. I guess this is what CNN's Chris Cuomo meant by "we do the job based on who's in power".

Despite Ramos’ bleating (published by the newspaper that published illegally-obtained Trump tax information), it’s hard to imagine what more could have been done by a media that pushed the Russia Hoax, pushed for impeachment, aided and abetted the vile demonization of Justice Kavanaugh, suppressed the respective Tara Reade and Hunter Biden scandals, all while burying the Trump Administration's economic achievements.

Seriously, what more could have the media done? Not much other than further indulge Ramos’ martyr complex, which is the real takeaway from this garbage column (titled “They Didn’t Want To Listen To Us” in its original Spanish).

Trump indeed taught the media a lesson, especially given his gains among Hispanics. And the lesson is: Don’t listen to Jorge Ramos.