Univision Goes All In on Bloomberg 'Wear Orange' Anti-Gun Propaganda 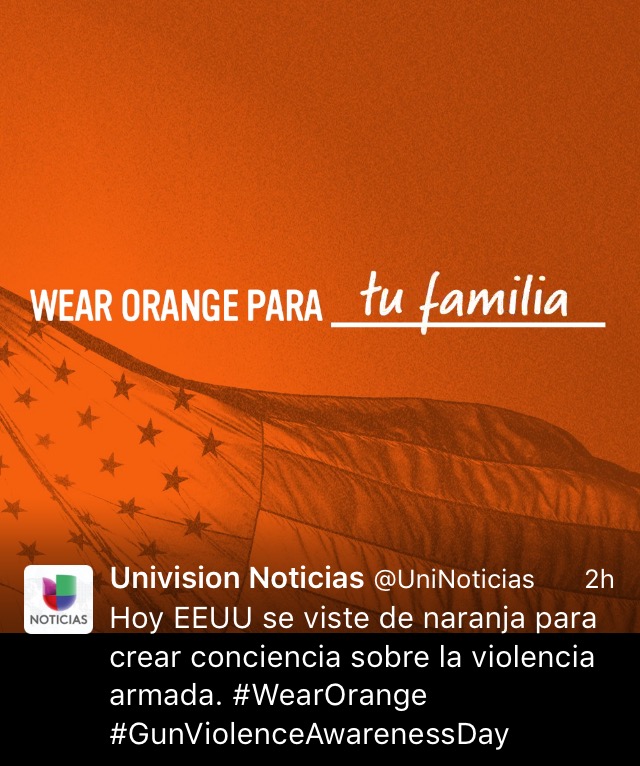 Univision's uniquely biased brand of "no two sides" advocacy journalism is no secret to anyone, particularly readers of this byline. Today, the network is partnering with a notorious Bloomberg-funded anti-gun group in propaganda efforts aimed at pressuring the public into creating a demand for increased curtailment of our Second Amendment rights.

NEW YORK CITY & MIAMI—The Wear Orange campaign (www.WearOrange.org) announced today that Univision Communications Inc. (UCI), the leading media company serving Hispanic America, will become the first Spanish-language broadcast partner to join more than 350 influencers, corporations, partner organizations and a series of iconic landmarks participating in the second annual National Gun Violence Awareness Day next week on June 2. For the first time, this year’s efforts will also include Spanish-language materials including PSAs and a translated website: VisteDeNaranja.org. In addition to Univision’s Spanish-language platforms, on-air, digital and radio, the English-language networks and platforms of the Fusion Media Group, a recently announced division of UCI, will also participate — including FUSION, THE ROOT, and FLAMA.

Efforts to end voilence within our communities, regardless of the means used to inflict said voilence, are noble and neccesary. However, we also know that there is a broader agenda involved. Univision's platformwide involvement, in particular, is nothing less than a shameful ploy to keep the Hispanic community ignorant and afraid with regard to its Second Amendment rights and responsibilities.

I know this to be true because the network has a long history of regurgitating anti-gun propaganda. In fact, here's what anchor Jorge Ramos said on occasion of the terrorist attack at San Bernardino, as he called (again) for outright repeal of the Second Amendment:

But that’s not going to happen. No presidential candidate – none - dares to even propose a prohibition on [private ownership of] firearms. And even the most reasonable ideas - such as barring the sale of firearms to persons on the no-fly list - are rejected in Congress. Conclusion: we have to sit around and wait for the next massacre.

(Note: this quote was directly translated from the original Spanish. "Prohibition" became "drastic curbs" by the time Fusion editors got to it- not the first time they alter Ramos' original columns. A reminder that corrupt media editing isn't limited to video.)

Not only is Univision expressly anti-Second Amendment but it is also complicit in the media's ongoing campaign of anti-gun deceptions, given its suppression of the Gungate story which exposed deceptive editing practices in Epix' ill-fated "Under The Gun" propumentary starring Katie Couric.

The network is keen on pushing as many eligible individuals as possible to become U.S. citizens for the sole purpose of voting in this year's presidential election, but is wholly uninterested in promoting assimilation via civic education beyond that which promotes its left-corporate agenda, which in 2016 appears to be expressly limited to voting for Hillary Clinton. I won't be convinced otherwise until the network puts as much effort into educating individuals on the OTHER amendments to the U.S. Constitution as it does into teaching illegal immigrants how to invoke the 4th and 5th Amendments in order to evade deportation.

If Univision wants to advocate against the Second Amendment, I would challenge them to reflect on current events in Venezuela and Mexico- societies where the individual right to keep and bear arms is as curtailed as the network wants it to be.

Stand by for video updates.