As of Thursday morning, both ABC and NBC have ignored the latest rift in the relationship between the United States and Israel as “a senior Obama administration official” told Jeffrey Goldberg of The Atlantic that Israeli Prime Minister Benjamin Netanyahu was nothing more than a “coward” and "chickens***."

Both the Wednesday evening and Thursday morning newscasts on ABC and NBC made no mention of this story, which further cements the chilly relationship Netanyahu and President Obama have had throughout Obama’s presidency. [MP3 audio here; Video below]

Meanwhile, Thursday’s CBS This Morning ran a nearly-three-minute report on it with co-host Charlie Rose stating the differences between the two now are “sharp” and “a sign that the two governments are not getting along.”

During his piece, CBS News chief White House correspondent described the vulgar language as a “new low” in U.S./Israeli relations as “those long, simmering disputes have turned profane.” Garrett mentioned that Goldberg has compiled other words from administration officials describing Netanyahu, ranging from “recalcitrant” to “obtuse” to “pompous.”

Plante noted that Netanyahu told Israeli lawmakers that he was “being attacked” simply for “protecting the state of Israel” as National Security Adviser Susan Rice was scheduled to meet with her Israeli counterpart on Wednesday night, which Plante predicted “could now be awkward.”

While Plante pointed out that White House Spokesman Josh Earnest described the comments made to Goldberg as “counterproductive” for two countries that have a close relationship, “the White House has” so far “made no promise to find or punish the author of this insult.”

In the article posted to The Atlantic’s website on Tuesday entitled “The Crisis in U.S.-Israel Relations Is Officially Here,” Goldberg reported that:

The other day I was talking to a senior Obama administration official about the foreign leader who seems to frustrate the White House and the State Department the most. “The thing about Bibi is, he’s a chickenshit,” this official said, referring to the Israeli prime minister, Benjamin Netanyahu, by his nickname.

This comment is representative of the gloves-off manner in which American and Israeli officials now talk about each other behind closed doors, and is yet another sign that relations between the Obama and Netanyahu governments have moved toward a full-blown crisis. The relationship between these two administrations— dual guarantors of the putatively “unbreakable” bond between the U.S. and Israel—is now the worst it's ever been, and it stands to get significantly worse after the November midterm elections.

The transcript of the segment that aired on October 29's CBS Evening News with Scott Pelley can be found below. 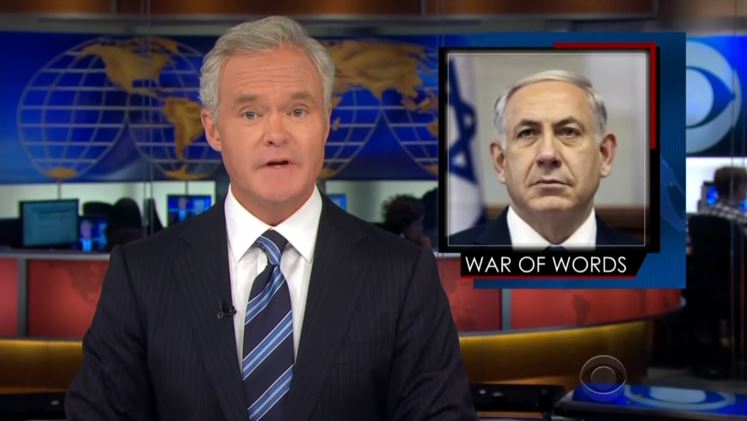 SCOTT PELLEY: Relations between the Obama administration and Israel's Prime Minister have never been what you would call warm, but now Bill Plante tells us a war of words has broken out, including language most foul.

BILL PLANTE: The battle began with an anonymous quote to The Atlantic monthly from a U.S. official using barnyard language to characterize Israeli Prime Minister Benjamin Netanyahu as a gutless coward. Their body language in meetings has suggested that the President and Prime Minister do not care much for one another, but the White House disavowed the insulting remarks. White House Spokesman Josh Earnest.

PLANTE: One of the biggest differences is the Israeli government's plan for additional settlements in Jerusalem in the West Bank.

EARNEST: Settlement activity is illegitimate and only serves to complicate efforts to reach a two-state solution. 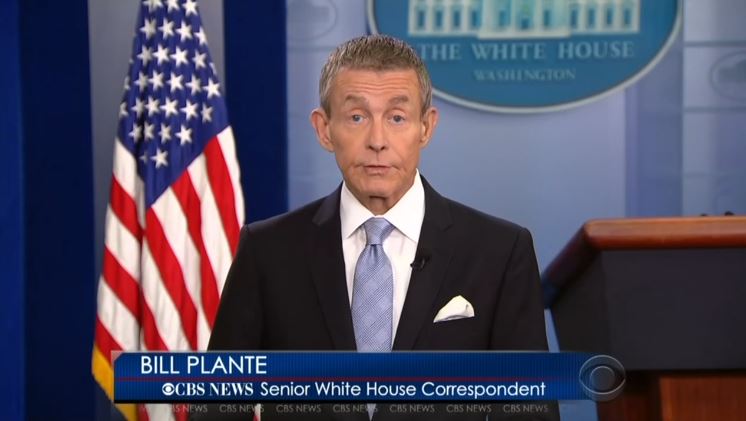 PLANTE: Netanyahu fired back in remarks to the Israeli parliament. “I am being attacked,” he said, "only because I am protecting the state of Israel." House Speaker John Boehner accused the President of insulting ally after ally, saying “[h]e either condones the profanity and disrespect used by the most senior members of his administration or he does not.” National Security Adviser Susan Rice has a long-scheduled meeting tonight with her Israeli counterpart, which could now be awkward and, Scott, the White House has made no promise to find or punish the author of this insult.

The full transcript of the segment that aired on CBS This Morning on October 30 is transcribed below. 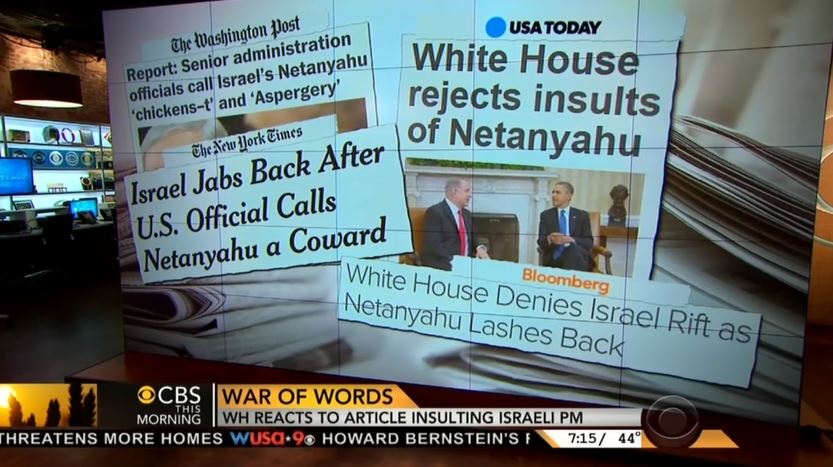 CHARLIE ROSE: Sharp differences between the leaders Israel and the United States are out in the open this morning. An unnamed Obama official is quoted insulting Israel’s Prime Minister Benjamin Netanyahu.

It is a sign that the two governments are not getting along. Major Garrett is at the White House where officials are rejecting language, but not the message. Major, good morning.

MAJOR GARRETT: Good morning. President Obama's relationship with the Israeli Prime Minister has been tense for years. The biggest flashpoints, Netanyahu's expansion of Jewish settlements and the President’s pursuit of a deal with Iran to end its feared pursuit of nuclear weapons. Well, those long, simmering disputes have turned profane. It's bad enough a senior administration official was quoted in The Atlantic calling the Prime Minister a coward, but this disparaging Avian adjective drove U.S./Israeli relations to a new low. The White House did not quarrel with the reporting of Jeffrey Goldberg and showed no interest in identifying or punishing its source.

WHITE HOUSE SPOKESMAN JOSH EARNEST: The fact is comments like that do not reflect the administration's view and we do believe that they are counterproductive. 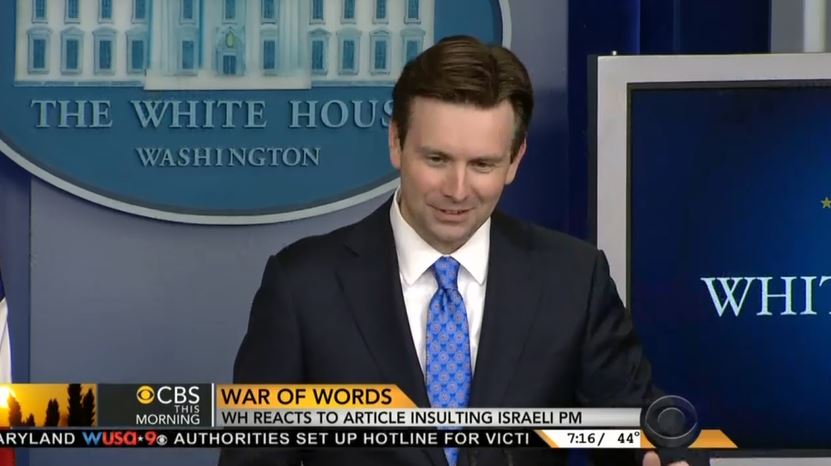 GARRETT: Goldberg, a veteran of Middle East reporting, has collected other unflattering administration descriptions of Netanyahu. [TO EARNEST] Is Netanyahu “recalcitrant?”

EARNEST: [SMILING] Why don’t you just do them all?

EARNEST: I would say that they all fall into the same category of not accurately reflecting this administration's view about our relationship with Israel or the President’s view of his personal relationship with Prime Minister Netanyahu.

GARRETT: The Israeli Prime Minister, addressing his nation’s parliament, said “if I didn't stand for our national and security interest, they wouldn't be attacking me and despite the attacks, I will continue to defend our country.” Israeli officials, it’s worth noting, have attacked top Americans too. Defense minister accused secretary of state John Kerry pursuing Middle East peace with “misplaced obsession and messianic fervor,” adding Kerry “cannot teach me anything about the conflict with the Palestinians.”

FORMER U.S. AMBASSADOR TO THE EUROPEAN UNION STUART EIZENSTAT: It certain complicates it when you have this sort of personal invective on both sides and that needs to be tamped down, there needs to a cooling off. 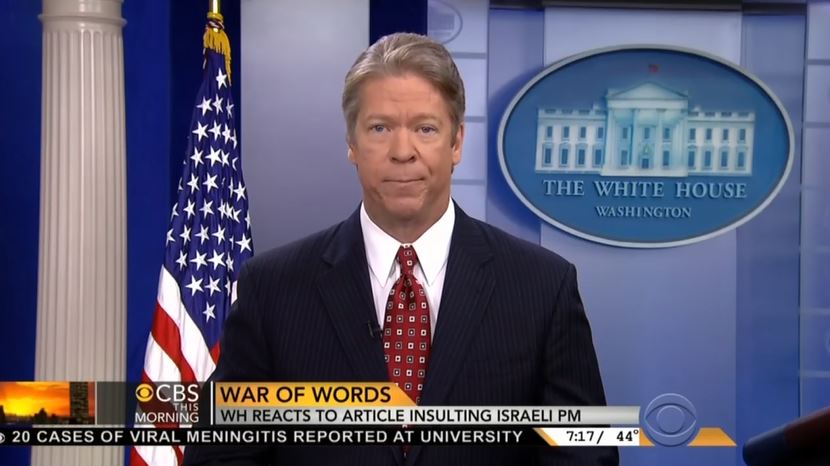 GARRETT: In a statement, House Speaker John Boehner said “[w]hen the President discusses Israel and Iran, it is sometimes hard to tell who he thinks is America's friend and who he thinks is America's enemy.” The White House says it has no intent of papering of – of rather papering over disagreements with Israel but says, when it comes to the Jewish State's security the United States is there. President Obama pushed for and delivered $225 million in aid this summer to resupply Israel's missile iron dome system. That system repelled most rockets fired into Israel from Palestinian-controlled Gaza. Norah?