LGBT Child Star JoJo Siwa Perverts Young Fans: 'You Can Be In Love With Whoever You Want' 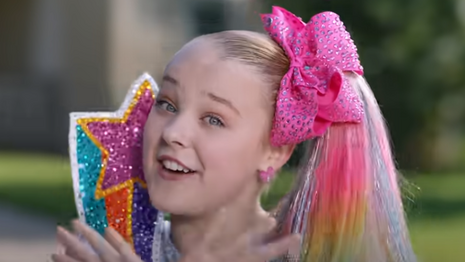 Pansexual child star JoJo Siwa tells young fans, “You can be in love with whoever you want.”

The 17-year-old “Dance Moms” alum delivered the ignominious message while presenting the award for “Outstanding Children’s Programming” at The 32nd Annual GLAAD Media Awards on April 8 which “honor media for fair, accurate, and inclusive representations of LGBTQ people and issues.” The Gay & Lesbian Alliance Against Defamation awarded the accolade to “The Not-Too-Late Show with Elmo.”

Elmo graciously accepted the award with the parting words, “Elmo wants to remind everyone at home: you’re amazing just the way you are. Elmo loves you. You’re special.” If that's the case, Elmo, let the children be.

This is unabashed brainwashing and the little red devil is complicit. The LGBTQ cabal is pushing their perverse agenda by the most subversive means. There is no disguising it, either, as Siwa clearly stated their evil machinations: “GLAAD has been working closely with kid and family show creators and publishers like ‘Little Bees Books’ to help them share LGBTQ stories for tween and teen audiences. Now even the littlest of kids can see what inclusion looks like.”

Siwa is a massively famous dancer, YouTuber, and now multimillionaire whose entire brand is specifically marketed towards a target audience of young children. She has over 33 million Tik Tok followers and 12 million more following her YouTube account. The power of her influence on the youngest generation is staggering and now dangerous as it is being weaponized to destroy their innocence. Defiling the fragile purity of children is the ultimate outrage and made worse by the fact that the perpetrator is herself a young girl.

And all this for what? For the children to become little drones with identity crises at 10-years-old? It's diabolical.