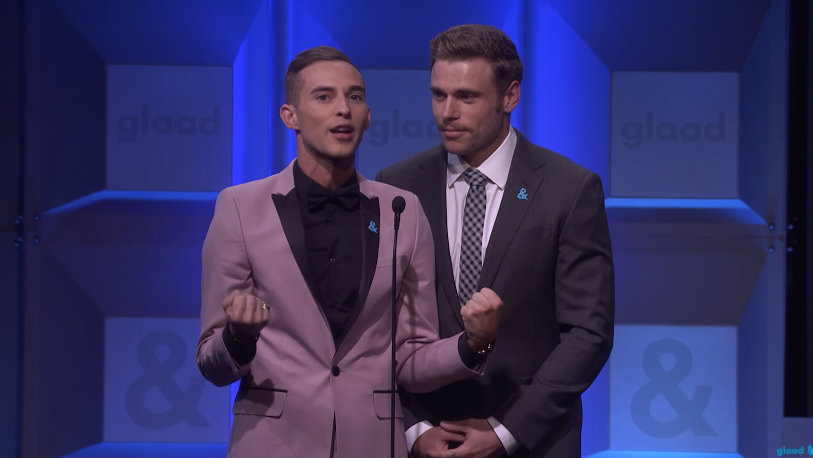 For the past week, GLAAD has been in the process of awarding certain sections of the media for being particularly sympathetic to LGBTQ issues during the past year. As far as nominations for journalism go, it turns out that the GLAAD Media Awards is indebted to major media networks, such as CBS, ABC, and NBC.

Hosted by lesbian Wanda Sykes in Beverly Hills on April 12th, the presentation’s main theme was an aggressive call for unity among all members of the LGBTQ community -- that they remain steadfast and defiant in a world they see as trying to erase them.

GLAAD leader, Sarah Kate Ellis addressed the audience, demanding that the LGBTQ+ community push for 100% representation in American culture. In response to “major hits” against the gay community, which Ellis mentioned as the very “visible” transgender military ban, and “removing us from the 2020 census,” she stated, “We must double down and raise our voices, and share our stories. To do what we do best in this room, which is change culture and accelerate acceptance.”

Well Sarah Kate Ellis certainly has the right people on her side to “accelerate acceptance,” or at least jam gay propaganda down the average American’s throat -- the major television news networks.

Forget that Britney Spears, Halle Berry, and the insufferable It Boys of Olympic homosexuality, Adam Rippon and Gus Kenworthy were there. What was most concerning was that the nominations for outstanding LGBTQ journalism and television news programs were announced, and they included several major American networks. The winners of these journalistic categories will be announced on Saturday, May 5th.

Three out of 5 nominations for “Outstanding TV journalism -- Newsmagazine” went to major liberal networks too. 20/20 (ABC) received a nomination for their story, “A Boy Named Lucas.” ABC's Nightline earned a nod for their segment, “Gay Purge?” And CNN's Anderson Cooper 360 was nominated for “The Pulse of Orlando: Terror at the Nightclub.”

The major networks also received nominations and awards for several sitcoms, talk shows, and reality TV. The View’s (ABC) episode with Laverne Cox and Gavin Grimm was nominated for “Outstanding Talk Show Episode.” CBS’s Survivor: Game Changers, which featured several LGBTQ+ members, received one for “Outstanding Reality Program.” NBC’s The Voice received a nomination in the same category. And NBC’s This is Us won the GLAAD Media Award for “Outstanding Drama Series” out of a list of nominees that included CBS’s Doubt, FOX’s Star, and CBS All Access’s Star Trek: Discovery.

Sarah Kate Ellis appealed to the GLAAD Awards audience, claiming: “They (conservatives, obviously) are erasing us. They are weaponizing religion. And they are vigorously rolling back our rights.” Her awards show was a giant political statement to the rest of the country that groups such as GLAAD will stand firm and continue to fight at all costs for LGBTQ representation. Considering that she has had much of the weight of the mainstream media on her side, the propaganda is going to remain ever in conservatives’ faces.