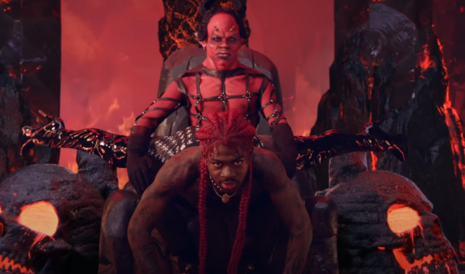 Rapper Lil Nas X -- real name is Montero Hill -- released the highly-anticipated music video for his most recent self-titled single “Montero (Call Me by Your Name)”, on Friday March 26. Nas’ creation consists of surreal and provocative visuals that include a stripper-pole extending from heaven to hell, and a gay lap dance with the devil. If you prefer not to traumatize yourself with optics of heinous gay stuff, this eloquent synopsis of the video provided to Hollywood outlet Variety Magazine will spare you:

The story opens in a lush Garden of Eden where Nas first introduces the theme of duality, which is displayed throughout the video. He plays the role of Adam as well as the snake that tempts him into giving in to the carnal desires he was forbidden to explore, and we see the two merge and become one. Following a nod to Plato’s Symposium displayed on the tree of life, a shackled up Nas finds himself at his execution day in the Colosseum, where he is surrounded by and receiving judgment from various versions of himself. Once he has been executed, he ascends to heaven only to be pulled down to hell where he harnesses his sexuality to seduce the devil and strip him of his power as an evil force — and dismantling the throne of judgment and punishment that has kept many of us from embracing our true selves out of fear.

The pornographic take on the Christian themes present are twisted blasphemy that brainwashed libs on twitter are greeting with an “outpouring of love and support.”  The Root calls it a “gorgeous video” and applauds Nas’ vulnerability and courage for unapologetically showcasing his authentic self. It is sad that as we approach Holy Week and Easter, the holiest time of the year for Christians throughout the world, he drops this piece of trash to peddle deviant smut to the masses.

This @LilNasX video is dope, and i completely get it. For all the gays (especially black) who’s ever been told you’re going to hell for being you....this is for you! Kudos! 🙏🏾 pic.twitter.com/kcxgeWLRUN

Nas embodies the left’s progressive fantasy: a flamboyant and young black man, overtly homosexual, highly favored among the masses, and who acts as a mouthpiece for their poisonous ideology. It would almost lend one to think that his sudden skyrocketing to fame in 2019 over his insanely popular single “Old Town Road” and his coming-out as gay was purposely maneuvered as an industry plant. Regardless if that's true, Nas can certainly be considered an evil pawn meant to disrupt the already bankrupt morality of today’s society. Perhaps that's giving him too much credit.

Nas accompanied the video with a letter addressed to his 14 year-old self in which he described an early gay relationship he had: “Dear 14 year old Montero, “I wrote a song with our name on it. It’s about a guy I met last summer." It was a candid explanation of his intentions behind his art. He explicitly admits he’s got an agenda: “they will say I’m pushing an agenda. But the truth is, I am. The agenda to make people stay the f--k out of other people’s lives and stop dictating who they should be.”