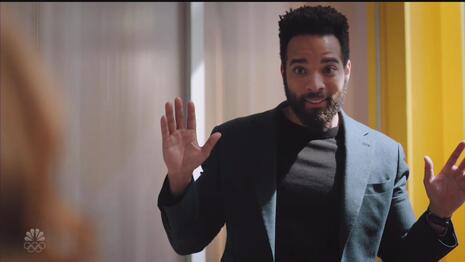 NBC’s Zoey's Extraordinary Playlist is the latest program to suddenly tackle racism in the wake of last summer's Black Lives Matter protests. The show follows Zoey (Jane Levy) as she navigates working at the tech company SPRQPoint. But celebrating a young woman in her leadership role takes a backseat to the "systemic racism" going on at the company, specifically in February 9’s episode, “Zoey’s Extraordinary Reckoning.” While Zoey may be well-intentioned, she’s also a privileged white woman.

Last week's episode, “Zoey’s Extraordinary Trip,” touched upon a glitch where an app wasn’t recognizing people of color. Simon (John Clarence Stewart) was tasked with holding a press conference to discuss the matter. After talking with Mo (Alex Newell), who is a queer black man, and Tatiana (Alvina August), Simon decides to call out the company in the last moments of the episode, claiming the app “couldn't see Black and brown faces because there are no Black and brown people in positions of power at the company.”

Race is the focus of this week's episode from beginning to end. This begins with Simon’s coldness towards how Zoey didn’t properly address the problem in his eyes. This was because Zoey spent last episode high on drugs.

Their boss, Danny Michael Davis (Noah Weisberg), wants Zoey to convince Simon to retract his statements made during the press conference, to clarify he was saying them personally.

When Zoey tries to see Simon as a friend and relate through her own experiences, she can't say anything right:

Zoey: Um... I just want you to know you're not alone in this.

Simon: Okay, so if we're being real, I don't feel like you're just the messenger, and I do feel very alone in this.

Simon: It's impossible for you to be on my side in this situation, and you cannot rewrite an experience you know nothing about.

Zoey: I mean, I know a little, right?

Simon: Yes, but that has nothing to do with who I am as a Black man in the world and what my experience as a Black man is in this office. I never had any mentors look out for me like Joan. There's no room for messing up for me, and I have to constantly prove why I deserve to be here. "Nice office. How'd you swing that?" They don't ever ask that to any of the other marketing execs.

Simon: Nah, it's the truth, and I have to constantly amputate parts of who I am to make other people feel comfortable in my presence so they feel safe, so that when I walk on the elevator, they--they aren't startled when they see me. Do you even have to think about that?

Simon: Simon is a Black man. You seeing me as only Simon denies a fundamental part of who I am. And you asking me to walk back my words, Zoey, is telling me to deny that fundamental part of who I am. And whether you're doing that as my boss or my friend, that makes you part of the problem. So, um, to answer your question, no, I will not be retracting anything that I said.

When Zoey goes to boss Danny Michael Davis to share “I feel like we’re part of the problem,” she’s brushed aside.

This is addressed in a Variety article drawing significantly from Stewart and show writer Zora Bikangaga. The focus on Zoey in this episode was because Stewart and Bikangaga “thought it would be more of an opportunity to show her blind spots and experience a reckoning in her own friendships and relationships through this event that happens at work.”

“After George Floyd and all of these Black bodies have been killed, all of these people were reaching out to me as if this was happening to other people and not as something that I am affected by or concerned with,” Stewart says. “What life have I been living that white people around me are OK seeing me as John apart from my Blackness? What parts of me have I amputated? And to extend that metaphor, what comes with things that are amputated are phantom pains — the pain of the things I’ve given up in these spaces and the responsibility to reclaim that.”

The episode also uses Tobin (Kapil Talwalkar) as the “first-gen” Indian character who is afraid to “stir the pot.”

Tobin: You wanna know why I make jokes all the time? It's because I'm a first-gen. It's how I fit in. It's how I've always fit in because I don't really fit in anywhere.

Zoey: Even here? At Sprqpoint?

Tobin: Are you kidding me? You know how shocked people in other departments are when they meet me and I don't have an accent or I'm not the guy delivering their shawarma? Happens all the time.

Zoey: No one should have to feel this way at work. You should say something.

Tobin: To who? HR? Danny Michael Davis? What am I gonna say? "People are treating me like an Indian guy." Guess what, Zoey. I'm an Indian guy.

Zoey: The company is asking Simon to say that he's the only one who feels this way. He clearly isn't. You could help him. You could help other people that maybe feel similar as you and Simon.

Tobin: I respect Simon for speaking out, I do, I just... I don't wanna stir the pot.

Tobin: No. If you need help with a coding glitch or a charmingly offensive pun, I'm all over it, but this... I'm sorry, I can't. I'm sorry.

Bikangaga says he “drew on a lot of experience for Tobin” and “relate[s] a lot to Tobin.” He added:

There are ways that first-gens differentiate ourselves to assimilate, to differentiate and to say we’re ‘the model minority.’ And all that does is condone and reinforce an environment of racism. And so, a lot of non-Black people of color have been stepping up to call that out. And I felt we had to acknowledge that because, as a person of color, if I watch the show I’m always going to be thinking about it.

Once Simon decides he is going to quit rather than retract his statement, Tobin “spoke out” so that in sharing his story online, others are encouraged to do so as well. Simon no longer has to quit, because Danny Michael Davis, “armed with these stories” is “going to walk into that boardroom, and I'm going to demand real and lasting changes around here, because, damn it, that's what a hero does.” Silly white man, he’s “not the hero in this situation” and he “still [has] got a lot of work to do!”

Simon presents these stories before a board of older, white people:

See, we're not gonna be able to fix this problem with just diversity committees, workshops, donating to a few places to help clear your conscience. It's about changing the culture here. It's about being inclusive in the rooms where decisions are being made... Including this one.

The show’s final moments are a celebration of their efforts throughout the episode. The toast comes from Mo, who evokes, of all people, hateful Rep. Maxine Waters (D-CA):

Tatiana: "A commitment to invest $50 million "In Black-owned startups, "Equal representation in all leadership positions by 2025, including the board."

Simon: Okay, you can stop there. The rest is just a series of apologies.

Tatiana: Wow, that press release went out fast. Whatever you said to them, it must've rocked them to the core.

Simon: I mean, I hit them with a few body shots.

Zoey: Yeah, you did, like a drunk white girl in Daytona. You don't know my past.

Mo: Toast, everybody, toast. I wanna make a toast! Max, get out the kitchen!

Max: Sorry, sorry, I was just putting together some TV stands and a lazy Susan back there. Guess who's not lazy. This guy.

Mo: That's not the vibe. Anyways, I wanted to throw this impromptu soiree because when a friend does something amazing, it should not go unrecognized. This Black king walked into a room full of powerful white people where we often don't get a seat at the table and told them what needed to be said and done.

Mo: And as Auntie Maxine Waters as my witness, baby, they were shook.

Simon: Thank you, Mo, thank you, everyone, but it's not like we cured racism, right? There's still a lot of work to do, and they could change their minds tomorrow.

Mo: Boy, if you don't hush and take this as a win. We have to celebrate the small victories, so celebrate with us, and be joyous. To Simon.

As is all-too-predictable, such storylines came about following the death of George Floyd. This has likewise impacted ABC’s The Rookie.

Variety and TV Line have been all too ready to highlight the “systemic racism” which characters in Zoey's Extraordinary Playlist experience in the workplace. It’s as if television all of a sudden wants to address racism, complete with the expected dose of pandering and virtue signaling from Hollywood.

Bikangaga promises that this storyline is “definitely not going to be forgotten.” The show returns on March 28. At least we know to prepare ahead of time.