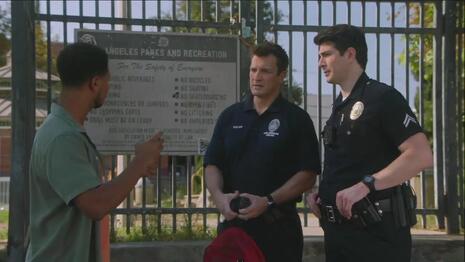 In the episode, Stanton’s rookie, Officer Jackson West (Titus Makin Jr.), goes from getting along with the seemingly affable Stanton before his true colors come out, to being morally conflicted about what to do, with his co-workers and superiors indifferent.

Viewers first see Stanton in action when Nolan and Detective Nyla Harper (Mekia Cox) are doing community outreach in that neighborhood. In plain sight, a young man breaks into a car, steals a backpack, and flees pursuing officers. Stanton and West respond to the call for back-up and James protests:

Nolan: It's okay, we're just arresting him for burglary for stealing this backpack.

James: What, you need four cops for a kid stealing a bag?

Stanton: Yo, my man, back off.

Nolan: It's -- It's okay. It's okay. Look, calling for backup is simply protocol. We don't know if the suspect is armed. Better safe than sorry.

James: Safe for who? Not for people who look like him. Or me.

Stanton: You want us to stick around?

West: Look, this guy just made one of your neighbors a victim. Okay? He's going in. Simple.

James: It's never that simple. Alright? If the city wasn't spending 50% of its budget on cops, then maybe he would have gotten a leg up instead of the short end of the stick.

West: Look, I hear you. Trust me, I do. But I don't have a time machine, okay? So right here, right now, this guy just broke someone's window, which is not cheap to fix, and he took their property. So if you want to help him, help him get a good lawyer.

Nolan: Are we just supposed to ignore crime, in his eyes?

Harper: It's not that easy. I mean, he's fighting against a rigged system, and he is not winning.

Again, the young man committed the crime in plain sight of officers.

In another scene, Stanton and West are responding to a call in another neighborhood where a young black man, D’Andre, explains his West African immigrant parents' home was broken into. Stanton makes assumptions and quickly jumps to questioning if D'Andre is part of a gang, demanding to know if he has any tattoos and who he is affiliated with. West diffuses the situation.

Stanton previously had experience handling gangs. Another officer reveals to West that “Stanton was originally an L.A. County Sheriff” and in that department “they don’t start out in the streets” but “do two years as guards” where they had “inmates pelting you with bags of feces on the regular to give you a jaded view of humanity.”

There’s also plenty more conversations between Nolan and James. By nature, Nolan is a do-gooder, who seeks to repair and improve a neighborhood park currently unsafe due to drugs. Thus far, Nolan’s efforts have been less-than-welcome by James:

James: City gave you permission to work on this yourself?

Nolan: Uh, yeah. Took some convincing, and I got to do it on my own time. All the city has to do now is come and inspect. Until then, lights are working.

James: Hey, that's just great. You must feel real good about yourself.

Nolan: Actually, my shoulders and my back are a little angry with me.

James: And what about tonight? When they break the lights again? What then?

Nolan: Uh, cameras are on the way, and the Watch Commander has approved more patrols in the area, so if anybody's caught messing with the lights, they'll be arrested.

James: So, more Black and Brown people in prison. And then you'll be gone, and it'll just go back to the way it was.

James: You ever wonder why cops spend so much time in neighborhoods like this? It's 'cause the arrests are easy. Hell, I've lost count of the amount of times I've seen rookies brought here and taught, "This is what a junkie looks like, and this is what a dealer looks like." And from that moment on, that's how cops see us.

James: Well, that's because your training officer looks like us. Look, the only person you helped this morning is you. [Chuckles ] Made yourself feel good while you put a band-aid on a systemic wound. You want to make a real difference? Stop picking on us and attack crime at the source. Keep meth out of this neighborhood. [ Scoffs ] Anything less, you’re wasting both our time.

Eventually James comes around, and brings his sons over to the community center to make use of the tutoring the officers are offering. We could have done without such above-mentioned scenes, though.

Predictably, this is all just a warm-up. In a preview for January 17’s upcoming episode, “La Fiera,” Stanton is seen tackling a young black man mistakenly suspected of a yet-to-be-announced crime. When his mother takes issue, Stanton physically pushes her back and shouts, “Lady, I will knock your ass out.” The preview ends with a verbal standoff, complete with dramatic music, between Sergeant Wade Grey (Richard T. Jones) and West, with the latter declaring, "Silence is complicity, sir."