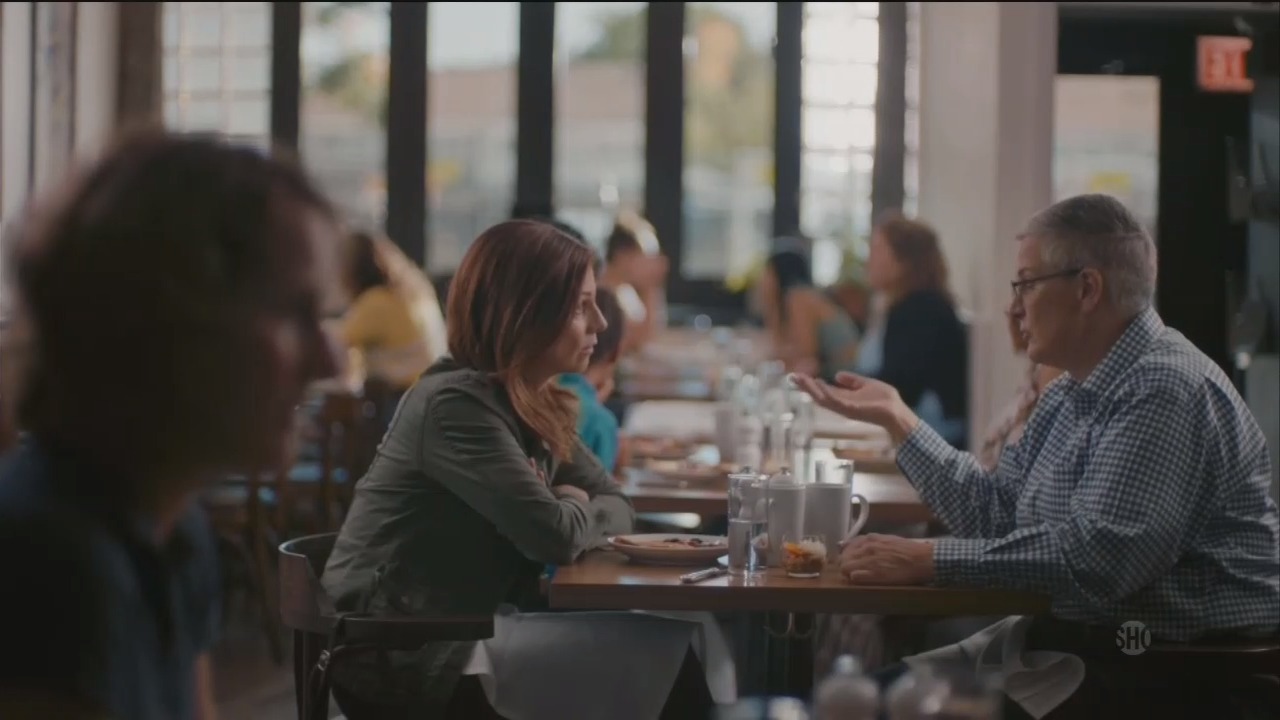 Showtime’s December 8 premiere of Work In Progress, titled “180 Almonds,” is the latest dark comedy from Abby McEnany, who plays Abby, a self-described “fat... queer dyke who has done shit in her life." How dark of a comedy is it? The opening quickly segues from Abby talking on the phone with a "wazzup" greeting to telling her therapist she plans to kill herself in 180 days; a therapist who ends up dying, mid-session in her chair.

Abby discussing being suicidal with her sister, Alison (Karin Anglin), doesn't exactly go well. The sisters fight about if Abby has even told Alison, who seems more focused on arriving on time to her kids' soccer practice and tells Abby to "stop feeling sorry for yourself" and that "you're going to be fine."

Abby is keeping almonds, 180 to be exact, given to her by a co-worker who knows she has been struggling with her weight. Abby explains that "every almond is a day of my life.”

Work In Progress does not merely focus on lesbians, but on those who are transgender. Alison gives Abby’s phone number to their waiter, Chris (Theo Germaine), who is not a lesbian like Alison and Abby assumed, but a trans man. Germaine is nonbinary, and has been profiled by MTV and NBC News.

Chris, at 22, is half Abby’s age, but seems much more put together. And yet the two enjoy each other’s company on their date to a restaurant. There Abby notices Saturday Night Live’s Julia Sweeney, known for playing the androgynous Pat. It was a character, Abby explains, who “ruined [her] life.” The episode features a flashback to a 1995 party Abby attended where she was rudely called “Pat” for looking androgynous herself.

Chris, who “really love[s] conflict,” confronts Sweeney and, despite Abby fainting, the encounter goes well. Sweeney feels bad about the role she played, and even wants to cook for the couple.

Abby and Chris share a kiss once Chris comes up, under the guise of having to use the bathroom. Chris even eats an almond, which forces Abby to get real with him and explain her life right now. Abby and Chris seem happy with one another, but there’s no lack of confusion, which is even played for laughs. Abby is with her friends when Chris calls to ask her out on a date.

Abby: Thank you. Thanks.

Friend: When are you going to see her?

In the promo for next week’s episode, Abby’s lesbian friend quips, “So I guess you’re not a lesbian anymore?” If even Abby's friends, members of the LGBT community are confused, where is that supposed to leave viewers?