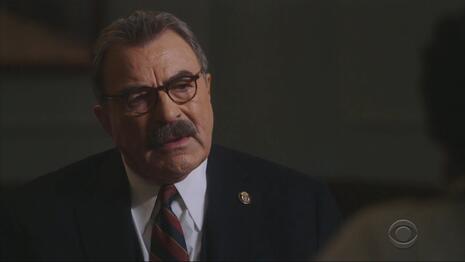 Despite an occasional dip into political correctness, CBS’s Blue Bloods usually takes the rare stance in defending the police in media. Thankfully, the latest episode continues that trend with the show standing up against the charge of “systemic racism” in the NYPD at the height of anti-copaganda. Christmas season is truly the time for miracles.

The December 4 season premiere “Triumph Over Trauma” sees Commissioner Frank Reagan (Tom Selleck) arguing with City Council Speaker Regina Thomas (Whoopi Goldberg) over “systemic racism and oppression” in the police. Rather than roll over and take it like every other network show, Frank stands up for his officers and shows no fear in telling the Speaker to stop disparaging the police.

Frank: Please have a seat.

Regina: Thank you. Listen, I... May have gone a little overboard today. I don't want you to think I'm trying to start a fight with you.

Frank: Yeah. The truth is, I enjoy fighting with you. But, Regina, what exactly are we fighting about this time?

Regina: About-- and you're not gonna like this-- the NYPD being on trial.

Frank: Well, because you're putting it on trial. And, by the way, everyone is entitled to a vigorous defense, even my people.

Regina: Do you really not see what's going on here?

Frank: I do. Every single cop is being painted with the same brush. And when anyone in my rank and file conducts themself in a way that is not worthy of the uniform, they get dealt with.

Regina: Every cop is wearing the same uniform, so if you get stopped walking while Black, how do you know which one is walking up on you?

Frank: Okay, how's a cop to know what he's walking up on? See, that fuse gets lit both ways. At least we can agree on that.

Regina: I need you to get your cops in check.

Frank: Fine, as long as we can keep the criminals in check. You got a way to do both?

Regina: You have criminals in your ranks.

Frank: Boy... Regina, you need to get your head out of your ass.

True, Frank himself acknowledges that this wasn’t his best behavior, but considering the weeks of endless capitulation to BLM, this confrontation was sorely needed on television. Perhaps if Black Lives Matter activists didn’t also start arguments claiming all police officers are racist, we would actually get somewhere with police and community reform.

Fortunately, Frank and Regina do have a calmer conversation later without resorting to language. While it still leads to a disagreement, Frank is nevertheless clear in denying that “cops are part of the problem and not part of the solution.” Even better, it still comes off as a calm discussion rather than the usual shouting match.

Frank: If you don't like the answers you're getting, check your premises.

Regina: Frank, good cops can be part of the solution. But when you have a bad cop, it would be nice if you could step out, or someone like you step out, and say, "Hey, this is not great behavior from our department."

Frank: I don't shy away from doing that.

Regina: Well, you know, a little empathy could go a long way to help things deescalate.

Frank: On both sides. Uh, Regina... I came here to try to rewind and start over. We've always had a pretty good relationship.

Regina: Yeah, it's a transactional one, but, I mean, it's nothing personal.

Frank: Okay, have it your way.

Frank: The fact is, this city is dividing into two camps who are just shouting past each other.

Regina: Frank, you've got to get your guys to deescalate.

Frank: I think you do, too.

Frank: Just 'cause you say something doesn't make it so.

Regina: Tell me you're not pretending you don't know that your guys step over the line.

Frank: I have a well-documented history of firing the ones who do.

Regina: Well, you should share that with people of color.

Frank: I don't think they're gonna listen to me.

After acknowledging that the anti-police crowd wouldn’t listen to him, Frank considers resigning from the force to help cool tensions. However, Deputy Commissioner Garrett Moore (Gregory Jbara) steps in to remind him that the courage to “speak the unpopular or inconvenient truth was essential to effective leadership.” If only our political leaders could be as brave.

Garrett: Short and sweet, like you asked. "To: Mayor Peter H. Chase..."

Frank: I know that part.

Garrett: "Dear Mayor Chase, please accept this letter as notice of my resignation. As commissioner of the New York Police Department, effective at noon on the last Friday of this month. Sincerely, Francis X. Reagan." "P.S...."

Garrett: This one does. "I take this action with a heavy heart and a full measure of regret. It has always been clear to me that the person holding this office must protect our citizens and, with the same vigilance, the men and women of this department. But lately that has become an impossible balancing act. To serve one is to betray the other. In regret, I have always held that a willingness to speak the unpopular or inconvenient truth was essential to effective leadership. This city, and especially this department, deserve no less."

True to form, Frank stays on as Commissioner and even agrees to a radio interview with Regina. The episode never shows the outcome of that interview, but the fact that Frank chooses to put himself out there for his department is proof that he’s not backing down.

It shouldn’t be so bold that a TV police officer would defend his own profession, but after Chicago P.D. and Law & Order: SVU both surrendered to the anti-cop narrative, Frank Reagan is clearly the exception not the rule for cops in 2020 television. Let’s hope he can continue to be exceptional the rest of this season as well.