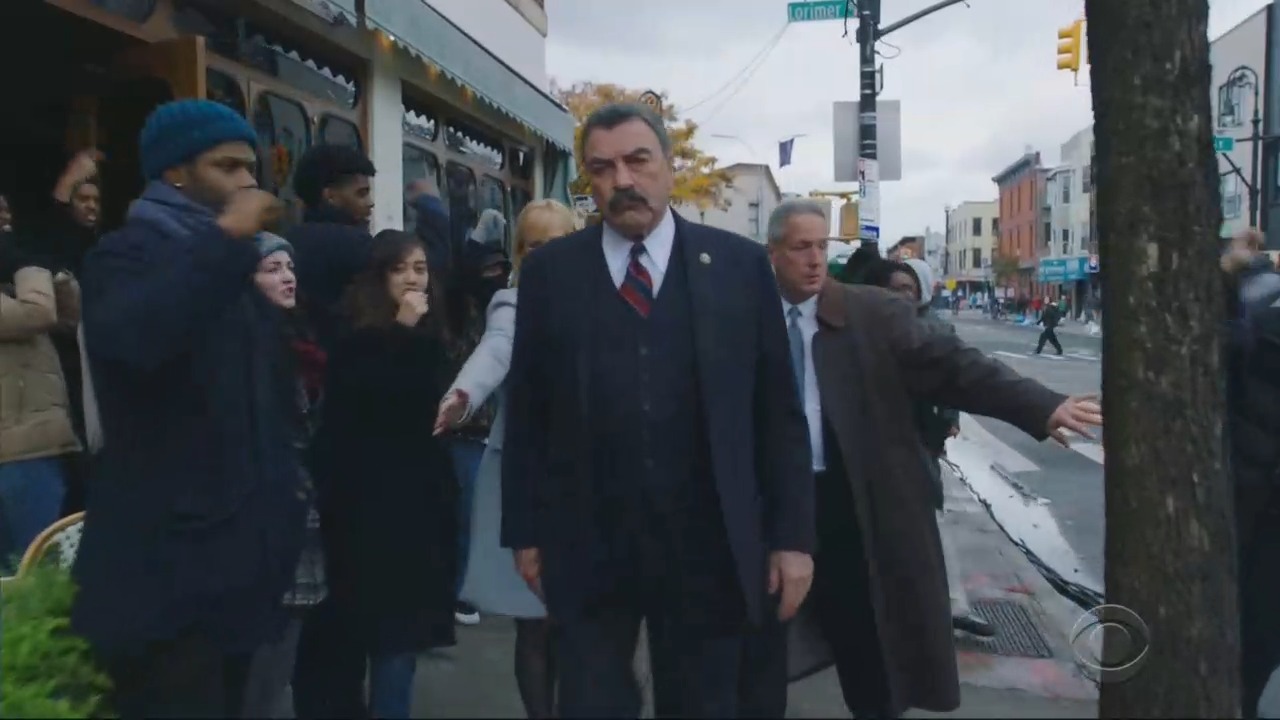 CBS’s hit police drama Blue Bloods rang in the new year with another excellent episode that tackled anti-police sentiment head-on and this time, they took leftist social justice activists to task for their new tendency to use aggressive public shaming as a protest tactic, as well.

Friday’s episode, “Disrupted,” starts out with Police Commissioner Frank Reagan (Tom Selleck) enjoying a peaceful meal at a local diner with his primary aide, Detective Abigail Baker (Abigail Hawk). The meal is soon interrupted by an angry mob of Antifa-like social justice protestors from the “New York Justice Coalition” who “want (him) to know how it feels to have (his) day disrupted for no reason other than (his) profile,” as they chant “We want justice! Cops just bust us!”

The mob’s leader, Corey Vallejo, stops one woman before she assaults Frank as he exits, saying, “We stay respectful even if they don’t.” Right. Because public shaming and aggressive harassment are completely “respectful.” #eyeroll

To make matters worse, the newspaper headline after the incident reads “Hit N’ Run Reagan” because the protesters are claiming that Frank and his driver intentionally ran over the foot of protester Malik Taylor without stopping and that Taylor consequently suffered serious injuries to his foot.

Vallejo then arrives to talk with Frank. He lets her know that his investigation into her led him to her job title- “Lucius Guerra Chair Professor of Intersectional Justice Studies at Hudson University.” He tells her that she “checks all the boxes” for being “the real deal, the next big thing, the fresh face of the New York left.”

Corey admits she didn’t see Malik being run over despite telling the media that the incident was intentional. “There are plenty of people that saw what happened,” Corey argues. Frank points out it’s her people that claim they saw it and that this is all a game and a staged stunt.

When he says he thought he saw a moment of civility in her when she told her people to let Frank and his team pass the day of the incident, she replies, “No. Just being practical. We don’t carry guns or nightsticks, so…” Frank then warns, “You know, we get false allegations thrown at us all the time. Be sure you're right about this 'cause if there is a crack in your case against us, we go at it like junkyard dogs.”

“That is some olive branch,” Corey says snidely. “Well, actually, it's better than that,” Frank points out. “It's damn good advice given to you totally free of charge and with respect you haven't earned.”

In the end, Frank’s team proves that the accusations were fraudulent, and Frank meets with Corey one last time to discuss matters. It’s scenes like this that make you wish Frank Reagan were a real person!

Corey: It seems there was a misunderstanding.

Frank: No, it seems like there was a scam. Did you order it up or just go along with it?

Corey: Neither. Some of my people got overly ambitious and thought they were doing our cause a favor.

Corey: The cause is like a magnet, it draws what it draws.

Corey: I came up here in good faith.

Frank: And there it is.

Corey: There what is?

Frank: The crux of this particular matter. See, you say good faith, I say... you came up to get ahead of it, that you've known all along what I now know. Am I going too fast for you?

Frank: See, what we got here is an unreliable narrator, that's you. And a cynical New York cop, that's me.

Corey: I'm a person of integrity and I came...

Frank: Do your homework. Look up Reverend Darnell Potter. Look up Shelley Wayne for the Mothers United Against Violence.

Corey: I know who they are.

Frank: Then you do know that I engage with my opposition. That I can be called out for faults in myself and in my department. That when the accusations coming out of your bullhorns have a ring of truth, I do listen.

Corey: No, what's implied is that you get to choose what faults you're accountable for.

Frank: Professor, you need to quit while you're ahead.

Corey: And how am I ahead?

Frank: I am charging Malik Taylor. I am giving you a mulligan... in the hopes that moving forward, you will use your smarts and your talents to engage on issues honestly and leave the ambush tactics to the thugs.

Corey: The word is "disruptors."

Frank: You can put all the lipstick you want on it. This is not your ivory tower. This is police headquarters. You attack it, you best have the facts and the truth on your side. And if you pull an act like this again, you won't know what hit you.

Corey: I hear you.

Frank: Even better that you believe me.

I mean, can he get any more awesome? Yes, he can, my friends. Yes, he can. The show ends with the famous Reagan family dinner scene shown in every episode of Blue Bloods, and Frank offers his granddaughter Nicky (Sami Gayle) sage advice on life after college that should be required viewing for the entire country before any other leftist mobs decide to attack another conservative figure with abusive behavior in a public place.

Frank: And, oh, Nicky. Please. Promise me one thing. After you graduate, take the knowledge with you, leave the tactics behind.

Frank: For one, yeah.

Jamie: What's that ambush have to do with college?

Frank: All I'm saying is if there was ever a time for that kind of disruption, to use the current euphemism, it's college-- the premise and promise of campus life is an invitation to push the boundaries.

Frank: Yes, it is. But bear with me, I'm on a very narrow path here. When you take that kind of atmosphere and inject it into real-world, workaday life, as she did with us, in that diner, the so-called disruption drowns out any valid point you have. On either side. Class dismissed. Pass the meat.

I have a feeling we’re in for more greatness next Friday based on teasers online. You may remember how the show temporarily slipped last season and turned a bit PC in one episode, giving Frank a storyline that was completely out of character for him to the dismay of many viewers.

According to Rotten Tomatoes’ description of the next episode, “A former officer waits on Frank at a restaurant, causing him to feel guilty about the circumstances surrounding why she was fired, and he tries to reinstate her.” Will it be Officer Witten? We can only hope!