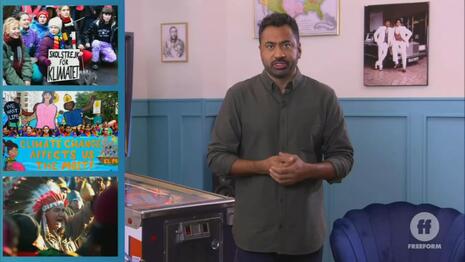 Freeform’s Kal Penn Approves This Message has only two weeks until the election, so the limited series now has to work overtime if it wants to sway any voters. To do that, the latest episode shifts radically to the left to the topic of climate change. And the show still believes it’s acting “non-partisan.”

The October 10 episode “Kal Penn Approves The Environment” focuses primarily on “climate change” but really he means global warming and every fear-mongering, easily debunkable argument we’ve heard for the past few decades. We have a Tik Tok star named Darrion Nguyen warning us the future could be like “playing the floor is lava, except the floor is literally lava.” We have the false claim that Exxon Mobil has been deceiving the public for years regarding climate because Big Oil Bad. We even have praise for the Paris Climate Accords, despite the fact that the U.S. is still meeting the accord commitments even after President Trump’s decision to pull out years ago. And yet the show still has the nerve to paint “deniers” as the ones afraid of facts.

Case in point, the unfunny Rehka Shankar is back, and she’s out to dunk on the “climate change deniers” which really turns into dunking on the president as well as evangelical voters.

Rekha: Of course I wasn't gonna find any climate deniers here. I'm in Los Angeles, the land of Priuses and yoga goats and DiCaprios. But in the real world--and by that I mean the internet-- climate change skeptics and deniers are everywhere.

Donald Trump: So Obama's talking about all of this with the global warming and--a lot of it's a hoax. It's a hoax.

Woman: Climate change is a hoax. Okay, it's just made up.

Scott Pruitt: I think there's assumptions made that because the climate is warming that that necessarily is a bad thing.

Rehka: Climate change denial is a problem we're gonna have to stamp out if we want to have a livable future. And confronting it is gonna take some tough conversations. I decided to talk to some young evangelicals, because the old ones kind of scare me. More than a third of Americans identify as born again, or evangelical. And a 2015 poll found that 37% of white evangelicals say there is no solid evidence that climate change is occurring. So I asked these ladies: Why do you hate the Earth so much?

The rest of her section is dedicated to speaking with the Young Conservatives for Carbon Dividends as well as “evangelical, science-loving, climate activist, Joe Biden voters.” Basically, the “right” kind of conservative or evangelical. Heaven forbid she’d have to actually change someone’s mind.

Lastly, Kal personally speaks with climate activists, including one who advocates fighting against “environmental racism.” No, seriously, Kal Penn gives time to an activist to explain what racism has to do with the environment. Somehow, this isn’t supposed to be the comedy bit.

Kal: There's a--there's a big part of your organization that deals with climate justice and racism within climate. Uh, that's not something that a lot of people understand. And I assume lots of our viewers kind of sit there and go, "What do you mean? What does racism have to do with saving the Earth?" Can you talk a little bit about what that is? Like how do you explain that to somebody who is unfamiliar?

Zanagee: Definitely. So as a part of Zero Hour's platform, we name four different systems of repression as the root causes of climate change. One of those is racism, and the other three are patriarchy, capitalism, and colonialism. And we name all four of these because they are tied together. And so when we talk about environmental racism and climate justice, we talk about who will be most impacted in the future by issues of climate change and also who's being most impacted right now. We know that some of the biggest polluters in the world are west countries. So we see pipeline infrastructure and national gas facilities, wastewater treatment plants disproportionally placed in neighborhoods of predominately low-income people of color.

First, many of the worst polluters in the world are not western countries. China and India have notoriously bad pollution records, yet I don’t see activists lecturing them. Second, if your movement includes tackling racism, patriarchy, capitalism, and colonialism, then your movement is not based on the environment. It’s a movement based on politics using the environment as an excuse to enact socialism. We’ve seen this move already.

Considering fewer than half of voters polled view climate change as an important issue this year, it’s hard to understand why Kal Penn would even choose this topic for an episode. However, once you look at his other episodes, the reason becomes pretty clear. This show isn’t about voters, it’s about voting out Donald Trump.

This show was sponsored by commercials from Ikea, IHop, and USPS.