Just about the only thing that could make your blood boil more than the first presidential debate is one half-hour of Freeform’s Kal Penn Approves This Message. For those of you not in the know, this is the program that believes it can still be non-partisan after showcasing Bill Nye and Hillary Clinton. Somehow, I don’t think that will bring people together. 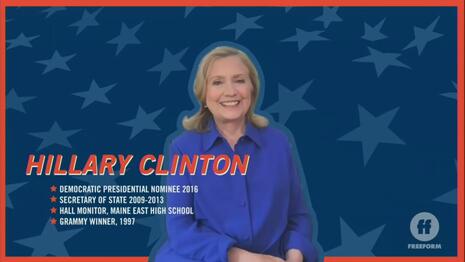 The September 29 episode “Kal Penn Approves Education” features discussions on education, automation, and, of course, liberal talking points. Predictably, even when Kal edges close to a bipartisan issue, he has to spike it with a liberal messenger.

For example, he brings up the valuable information that trade schools are marvelous opportunities for students without the cost of universities. However, he then ruins that sentiment by adding on left-wing hater Bill Nye to yell at us about science.

Then we come to an interview with none other than 2016 election loser Hillary Clinton. The fact that this show thinks that Clinton has anything relevant to say is proof about which side it leans. Sadly, the series thinks it can skate around that issue by addressing it and then immediately dismissing. And they even throw in a call for universal healthcare in the process.

Kal: When I had the chance to book you, this reminds me of this-- several conversations I had with friends, right? Said, "I think Secretary Clinton has agreed to join us for our show." There was a lot of pushback from democratic friends. Um, and I know that you know it's there. It's sort of like, "Oh, she might be too polarizing. "Do you--do you really want a polarizing guest on--on "An episode of this new show that's encouraging people to vote?" And I just thought--I wanted task you how that makes you feel, whether it's exhausting. Because to me, it's sort of like how Kumail Nanjiani is getting all the acting jobs now that he's ripped and way funnier than me. Uh, is that frustrating? Is it exhausting? Or is that just part of how it is?

Hillary Clinton: Now, why I am polarizing? Well, you know, I'm a kind of pushy woman, if you really stop to think about it. And I've also pushed hard on a lot of issues that I care deeply about. You know, back when I was First Lady, um, and was advocating for universal healthcare, uh, I was burned in effigy. Now, was I polarizing because I thought everybody in the country should have access to quality, affordable healthcare? Or was I the, you know-- the figurehead, ah, that was then targeted because there are a lot of really powerful interests who don't want us to have, uh, universal healthcare, no matter what you call it. Whether you call it universal healthcare, Medicare for All, whatever you call it, there area lot of powerful interests, ah, that don't want you to have it.

With that answer, she might as well have said that her problem is caring too much. I suppose everyone on the left still wants to blame everything but Hillary’s personality and alleged crimes for why she lost the presidency. The only thing pleasant about this scene is reminding people that Hillary Clinton is not in any way a part of the 2020 presidential debate.

We still have a month left of campaigning, and that means another month of Kal Penn Approves This Message. Once again, November 3 can’t come soon enough for America.

The show was sponsored by commercials from Reese’s, Pampers, and Olay.