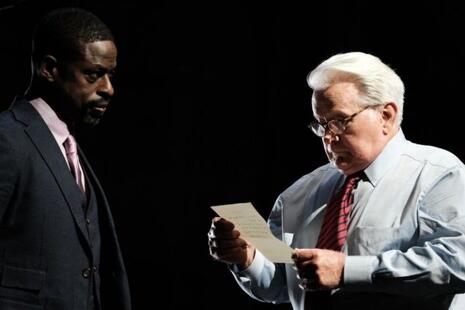 The October 15 West Wing reunion was mostly a stage reenactment of the season three episode “Hartsfield’s Landing.” In the episode, President Bartlet (Martin Sheen) faces a contentious Chinese trade deal as well as the start of the presidential primaries in the small New Hampshire town of Hartsfield’s Landing. Most of the cast return to reprise their original roles except for the late John Spencer, who passed away in 2005 and played Chief of Staff Leo McGarry. Aside from the addition of Sterling K. Brown as McGarry to the cast, most of the story plays out the same albeit from the Los Angeles Orpheum Theatre.

The only real difference comes from the commercial breaks where, instead of ads, we get various celebrities and cast members telling us to vote. We kick things off with Martin Sheen claiming that the When We All Vote group that benefits from the show is “non-partisan,” despite it being founded by Michelle Obama (who speaks after him). With the addition of President Bill Clinton in the special, it’s safe to say this “non-partisan” group seems to be focused mostly on one party.

The special gets even worse with the addition of The Handmaid's Tale's Elisabeth Moss, who played President Bartlet's daughter on the show, speaking with fellow cast member Dulé Hill. Both Moss and Hill go all out in fearmongering for 2020.

Elisabeth Moss: Are you impervious to illness or injury or infection? Do you have parents? Do you think you’ll have kids? Do you care about what kind of school they’ll go to? You care about politics.

Dulé Hill: Do you care about other people? Kids born into unimaginable poverty? People being singled out and brutalized because of their race, their religion, their national origin, whom they choose to love?

Elisabeth Moss: Free speech, a free press, a woman’s right to choose, a Black man’s right to breathe, an 8th grader’s right to be free from fear that Social Studies won’t get interrupted by automatic gunfire.

Actor Samuel L. Jackson comes directly after them with a message that is hardly more positive or honest. He says:

These views of the country are probably more fictional than the show, but it sadly doesn’t end there. We have an appearance by Lin-Manuel Miranda, who brings up the idea that the actual results of the election could take “days” due to mail-in voting. Considering nearly every celebrity guest in this benefit supports mail-in voting, it seems like this cast is counting on it.

Then we have Bill Clinton who’s still promoting the false claim that Trump is purposefully “crippling the Postal Service in the midst of a pandemic.” Even though this is a conspiracy theory on par with anything from Qanon, the former president apparently has no problem pushing this idea for a “non-partisan” organization.

Finally, we have Hill and Sterling K. Brown capping things off with a Black Lives Matter salute, as if there were any doubts as to which way this special leans.

Dulé Hill: Only 40% of African-Americans between 18 and 24 voted in 2016. And today, even at the height of Black Lives Matter, too many young Black men think elections just don’t matter.

Sterling K. Brown: It’s not surprising that many of you feel that way after decades of suppression, disenfranchisement, gerrymandering, and much worse.

Dulé Hill: In 2016, there were foreign disinformation campaigns aimed specifically at reducing the Black male vote.

Sterling K. Brown: And they were successful. So it’s no wonder that so many have tuned out, turned off, and come to think that politics doesn’t speak for them.

Dulé Hill: Don’t fall for it.

Sterling K. Brown: Don’t listen to those who are dying for you to sit on your hands. If you’re sick, not just of the coronavirus, but the fact that African-Americans are twice as likely to die from it, this election matters to you, and you need to vote...

What people are really sick of are sanctimonious celebrities lecturing to us about politics. If it keeps going this way, Hollywood might end up re-electing President Trump. I bet they’ll regret telling people to vote then.