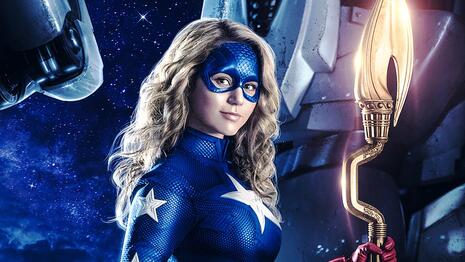 The series follows 15-year-old Courtney Whitmore (Brec Bassinger) discovering her new stepfather Pat (Luke Wilson) was previously the sidekick to the staff-wielding superhero Starman (Joel Mchale) as well as the now-deceased superhero team The Justice Society of America (JSA). When the family moves to the small town of Blue Valley, Nebraska, they soon discover a resurgence of the JSA’s old archenemies, The Injustice Society of America (ISA). Using the staff, Courtney takes up the mantle as Stargirl and reforms the JSA with the help of her new high school friends to stop the villains.

Over the season, we slowly learn the extent of the ISA’s master plan. The August 4 penultimate episode “Stars & S.T.R.I.P.E. Part One” finally reveals the whole thing as it’s put into motion. Our teen heroes, along with Courtney’s parents, aim to sneak into the ISA lair to destroy a mind-control device that the villains plan to use over half the country. Through further diving, they soon find the ISA’s manifesto for what they call a “New America.” In it, they find that the bad guys’ plans include ending racial discrimination, stopping global warming, and providing universal healthcare. Basically, it involves everything a leftist, or even our young heroes, would consider “good.”

Beth: Whatever they're going to make people believe in, they call it the "New Constitution." They wanna combat... Global warming? Oh, wait! They wanna force people to...

Courtney: They're going to force people to what?

Beth: Force them to embrace solar and wind power. They're going to eliminate discrimination over race, religion, sexual orientation...

Rick: You're kidding me.

Courtney: That sounds good. I-is that not good?

Rick: Hey, Pat, are you sure we're on the right side?

Of course, it’s not all perfect. They also learn that some people with stronger minds will apparently attempt to resist the reprogramming, leading to their deaths. In fact, at least 25% of the ISA’s 100 million targets are expected to die from the process. At least our heroes draw the line at needlessly murdering 25 million innocent people. Nowadays, it seems like even that’s not a red flag for the hard left anymore.

In fact, it’s hard to believe that this is supposed to be a sympathetic appeal for our villains. The show clearly wants us to wonder whether the ends justify the means, but pairing terrible liberal means with even worse ends hardly makes anyone look good. All we see now are people willing to control and kill all those who disagree with the Democrats' platform. Considering the left’s frequent support or apologies for socialism and communism, perhaps that’s not a surprise anymore, either. I wonder if any liberals in their sponsors like Old Navy, Starbucks, and Facebook appreciate that.

That being said, Stargirl is still light years ahead of Batwoman and Supergirl, even if it may borrow a plot or two. We can hope for the show to improve in its second season, but considering it’s now exclusively owned by the left-of-Bernie Sanders CW, it may be time to worry. After all, no one else is coming to save the day after this.