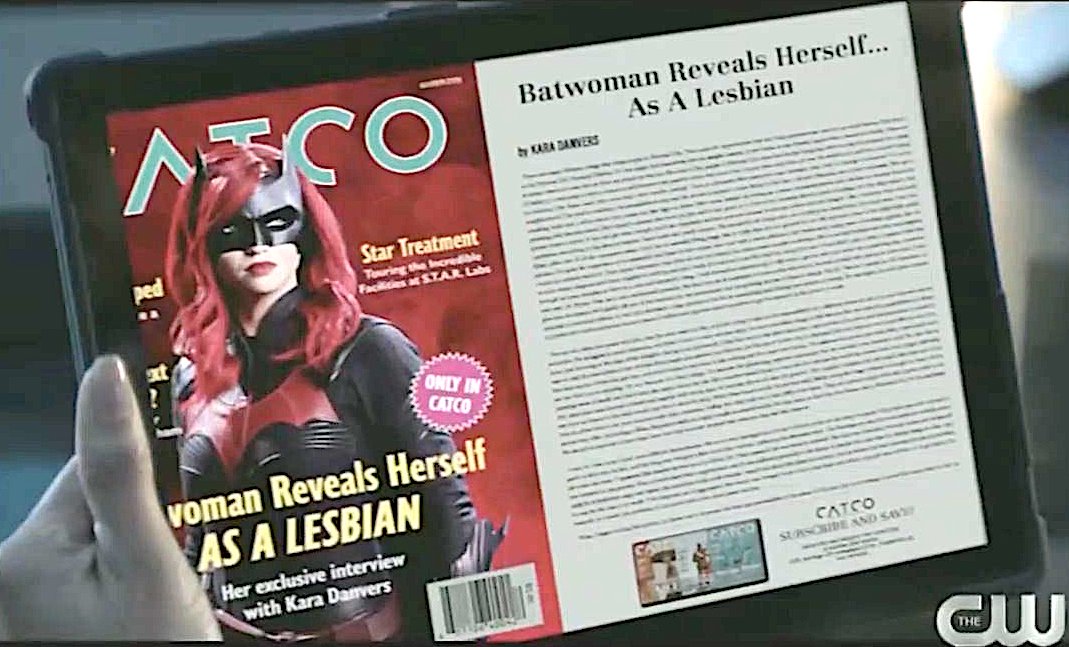 It’s 2020 and liberal television still thinks it’s a big deal to have a character be gay. It’s so important that characters outing their superhero alter egos on television is also a big deal. CW’s Batwoman goes the extra mile by “outing” Batwoman as a lesbian in the universe of the show. Apparently, that’s the latest milestone for the LGBTQ community.

The January 19 episode “How Queer Everything Is Today!” has Kate Kane/Batwoman (Ruby Rose) searching for a cyber-terrorist. This unknown hacker was able to disrupt the Gotham City train system as well as doxx the personal information of the mayor from an unknown location. In addition, the hacker demands a five-million-dollar ransom to prevent any other public information being leaked.

Fortunately, Batwoman locates the hacker at a local high school, revealing the cyber-terrorist to be a teenager named Parker (Malia Pyles). When confronted on this, Parker admits that she wasn’t trying to terrorize anyone but merely wanted to freak out her parents and earn enough money to leave town because she’s a lesbian. Really, the motivation of this villain-of-the-week is that her parents aren’t supportive of her being gay. And I thought Batwoman already covered strawmen.

Parker: Look. I really am sorry. I just thought if I could scare my parents into thinking I almost died they'd just be happy I was alive and forget their daughter was a freak.

Batwoman: You're not a freak.

Parker: My ex. She said being in the closet was prehistoric. I either told them the truth, or she'd leave me. She didn't get it. I couldn't tell the truth, so when I told her to just go, she went nuclear and told my parents for me. My mom and dad thought they'd been raising some bts-loving heteronorm. Now they sleep clutching rosaries and want to disown me. That's why I need the money-- to get out of Gotham.

Batwoman: That sucks, and it's not fair, but it is not an excuse to put hundreds of lives in jeopardy—

Parker: My parents want me to be someone I'm not. Do you know how that feels? I hate myself, ok? And let's raincheck your it gets better PSA. We both know I'm gonna grow up hiding my girlfriends and aspiring to be represented by an ancillary character on my favorite TV show just like you were probably the cool girl in high school, and now you're famous, and everyone's shipping you and the hottest guy in Gotham.

What’s worse is that this moment with Parker actually gets to Kate. To try and “be herself,” she finally “comes out” to the public, giving an interview to the press as Batwoman and revealing Batwoman to be gay. This information easily becomes front-page news and Kate feels satisfied as her ex Sophie (Meagan Tandy) and Parker read about it.

Vesper: Ok, people. Time to recalibrate our gaydar. Batwoman is a lesbian? Not that there's anything wrong with that, but talk to me Gotham. Whatever happened to politics staying out of our superheroes?

Kate: We all wear a mask of some kind, a cowl, a husband, wife, denial, anger. We all need our shield to protect us from the world, but for people like us, it's not always about stopping a runaway train or disarming a bomb.

It’s truly a sign of the times when I agree with the Rachel Maddow cameo (Vesper). What did happen to keeping superheroes out of politics? After all, what does Batwoman being a lesbian have to do with her being a superhero? Being gay doesn’t make one any more noble or self-sacrificing, so it hardly constitutes mentioning in a show about being a hero. Sadly, representation and having a progressive image seems to be more important than saving lives in the world of Batwoman.

Unfortunately, that is not what we’re getting from the liberal media. The Hollywood Reporter called the moment “historic” and “ground-breaking.” Entertainment Weekly labeled it “heroic,” as if the magazine forgot that Batwoman is a fictional character. Even Deadline breathlessly reported on the scene, pretending that a gay woman playing a gay superhero coming out as gay on her own series worthies a headline.

In reality, Batwoman is a lousy excuse for a hero, even without the social justice nonsense. She’s self-centered, arrogant, and only uses the superhero moniker to push her own agenda and boost her ego. She’s basically the ultimate social justice warrior, and there’s nothing heroic about that.