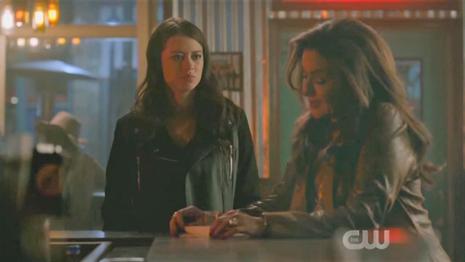 Leave it to CW’s Roswell, New Mexico to squeeze in an SJW quip in its final episode of the season. After this year of alien abortions, alien threesomes, and endless drags against ICE, I was hoping for one final episode with no issues. Unfortunately, the last five minutes went off the rails with the bold declaration that “bad white men” die heroes, unlike the poor Mexicans.

The June 15 season finale “Mr. Jones” follows the aftermath of last week’s evil scheme by the evil bigoted Master Sergeant Jesse Manes (Trevor St. John). Of course, our leads managed to stop the alien bomb he set up at a local convention. As a bonus, he’s killed during the process, so there’s one less racist on the planet. Everything seems pretty good so far.

However, that’s not how the media portray it. You see, since the world is actually not privy to the existence of aliens, the public story ends up completely different. Instead of the brave and brilliant Mexican-American Liz Ortecho (Jeanine Mason) saving the day, it was supposedly the heroic white Jesse Manes who stopped a bomb that day. With no way to show otherwise, Liz is forced to hear people declare how “we need more people like him” despite Manes really being an evil bigot. From the way she described the Mexican experience last week, she’s apparently used to it.

Ignoring the fact that the show seems to think that the media are favorable to white men over minorities, the episode takes things one step further near the end. Liz’s sister Rosa (Amber Midthunder) catches up with their estranged mother Helena (Bertila Damas) after everything she’s done. In this time, Helena laments that while a man she hated is dead, he will always be lionized by the public. “People like him-- bad white men-- they die heroes,” she explains. “People like us-- we die villains.”

Helena: If you came to tell me what I did wrong, your sister already texted.

Rosa: Did you get what you wanted, Mom? Is your score finally settled?

Helena: No. I wanted everyone to see Jesse Manes humiliated and weak. I wanted him to die knowing shame. But the papers say it was a tragedy. People like him-- bad white men-- they die heroes, no matter what they've done. People like us-- we die villains.

Honestly, one of the most unbelievable aspects of this entire show is the idea that the media praise bad white men “no matter what they’ve done.” The episode literally ends with an evil clone of the alien Max (Nathan Dean), and that is still more outrageous. When every other day there’s positive reporting of Black Lives Matter protesters tearing down old statues, it’s hard to think the media support any white men, much less the bad ones. Yes, this episode was filmed ages before these riots, but the media were hardly more positive for white men in 2019.

While this may be the last episode of Roswell, New Mexico for the year, it’s only a matter of time before we see its third season. Sadly, no amount of coronavirus or senseless rioting can stop this otherworldly force.