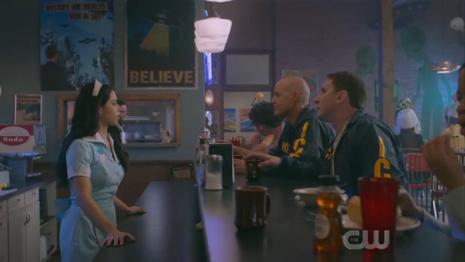 CW’s Roswell, New Mexico took a week off following its claim that people walk through the doors of ICE facilities and die. Unfortunately, it’s back to tell us pretty much the same thing as we’re reminded how terrible ICE officers are. As if 2020 hasn’t been bad enough for us earthlings.

The June 1 episode “Linger” features the unpleasant return of the racist ICE officer. Namely, it features yet another display of open bigotry from an awful caricature. Apparently, the writers thought the previous blatantly political think piece of a plot was so good that it deserved a follow-up not one episode later. And his appearance is just as meaningless now as it was then.

Of course, Liz uses this opportunity to call him out on how terrible he and the whole immigration system is because it arrests and deports people who break immigration law. She even has the nerve to ask, “Why do we have to be perfect to deserve to exist within some arbitrary border?”

Liz: What are you doing here?

Liz: Tell you what. Coffee's on the house if you take it to go.

Officer: Oh, sounds pretty entitled for a Mexican. With a criminal record.

Liz: You do know I own this place, right? I can refuse service to racist dicks.

Officer Hinkle: You know, it's a shame. You'd be good-looking if it wasn't for that ugly mouth.

Liz: Oh, do you want to know what my ugly mouth can do?

Liz: My ugly mouth can tell the ACLU that you, Chad Hinkle, were on track to miss your monthly quota when you violated the fourth amendment by yanking my dad out of a hospital. Now that you're here, my mouth can tell my lawyer to press misdemeanor stalking charges. My mouth can say that your sister's kid goes to school in a district she does not live in. But, hey, that's just from Google.

Liz: No. You want to destroy my family over a bogus vandalism charge? Why do we have to be perfect to deserve to exist within some arbitrary border? Why is it okay for you to screw up, but not me?

Officer Hinkle: Because I am me, and you're a waitress.

Unlike Officer Hinkle, I’m not a racist strawman, so I’ll answer Liz’s question. ICE officers don’t arrest illegal immigrants because ICE is racist. ICE officers arrest illegal immigrants because they immigrated into the country illegally. Having a family doesn’t suddenly excuse people from breaking the law. For someone who’s supposed to be a scientist, Liz seems to have a problem recognizing that very simple concept.

Then again, I doubt anyone who claims the border is “arbitrary” has any sense regarding border laws. Where I’m standing, it seems the show doesn’t even have any sense regarding people who don’t think like them. How else do we get paper-thin stereotypes like Officer Hinkle?

Liz once again gets the officer off her back with the help of her ex-fiance Diego (Cleo Anthony), but the damage is done. It’s still apparently awful to arrest people who break the law. The organization with about half of its officers coming from Hispanic origin is now racist. And all that is sadly getting a third season.