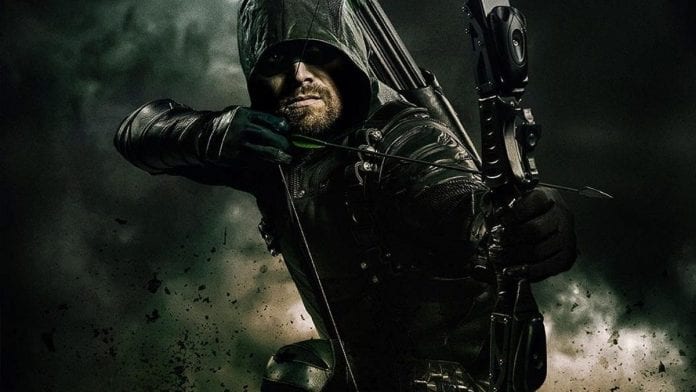 This is the final season of the CW’s superhero drama series Arrow. Not only does this mark the end of the show that brought us the shared TV universe of The Flash, Supergirl, Legends of Tomorrow, and Batwoman, it’s also the writers’ last chance to make a political statement. Sadly, the show decided to reveal its real priorities by throwing in a last-minute MAGA reference for the bad guy.

The November 5 episode “Present Tense” climaxes with the Green Arrow/Oliver Queen (Stephen Amell) and his team cornering the latest villain of the week. This time, it appears to be a man emulating one of Oliver’s oldest supervillain enemies Deathstroke. Like the original Deathstroke, this new one is looking to level Oliver’s hometown of Star City, but this comes with an added twist. He wants to “take back” the leveled city for its citizens in order to, you guessed it, “Make Star City Great Again.”

Deathstroke: Tonight, we take back this city from the cancer which has plagued it. We will set its citizens free. We will save this city from itself. Stand beside me. Take back what is yours. Let’s make Star City great again.

Mia: Where are his men?

Oliver: Mia, you should get behind me.

At this point, I can’t even count how many shows have tried to twist Donald Trump’s 2016 campaign slogan into something evil. This isn't even the first comic-book show to do it. All this moment shows is proof that Arrow can be just as blatantly political as its fellow heroes. If there’s one thing I’m hopeful for this election season, it’s finally putting the evil MAGA cliché to rest along with this final season.